Dischidia - Epiphytic Houseplants for Everyone

Dischidia plants are generally easy to grow and they make good houseplants or even as Christmas decorations and wreaths.

The genus Dischidia belongs to the milkweed family (Apocynaceae) and is closely related to plants in the genus Hoya, another popular group admired for their showy, sometimes fragrant, often waxy flowers.

Five species of Dischidia are available in Singapore and they are commonly grown for their foliage and interesting growth habit. Most of them have very small flowers that only the keen-eyed gardener can spot. When injured, they exude a milky sap and individuals with sensitive skin should avoid touching it.

Some Dischidia species are fast growers while others grow in periodic spurts. Dischidia is an epiphyte - plants that grow on supports such as tree trunks or branches. Their stems may produce roots along the nodes to absorb nutrients and water and provide additional support for the plant.

Be creative with Dischidia for Christmas

Most Dischidia plants are usually sold in small pots that can be hung at a bright window, balcony or corridor. Some species are wound around a decorative support and these can be used as Christmas tree decorations on more sturdy trees. They also make very good gifts even for novice gardeners.

The stems of species such as Dischidia ovata, Dischidia nummularia and Dischidia oiantha can be cut and used to adorn wreaths and Christmas trees. Dischidia vidalii is a particularly good candidate because of its unusual pouch-like modified leaves and tiny red flowers.

Also known as Dischidia pectinoides, it is better known by its common name the Ant Plant. It is perhaps the most common Dischidia species grown and sold locally. It produces numerous small, ornamental red flowers and is best known for its curious-looking, pouch-like modified leaves which are hollow, root-filled structures.

In its natural habitat, this plant is often associated with ants and the hollow modified leaves (affectionately called 'ant hotels') provide shelter for ants. In return, ants guard the plant and their excrement provide nutrients for their host. 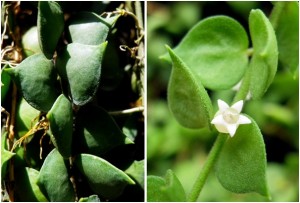 Commonly known as Million Hearts, this species of Dischidia has numerous small, heart-shaped leaves that line both sides of thin trailing stems. Its flowers are small and grow between a leaf and the stem (right).If grown under intense light, the plant's leaves will develop a red tinge.

In Singapore, the plant is sold in hanging pots where its stems trail over the rim of the pot or are wound round a heart-shaped frame ornament. Both versions often make their appearances around Valentine's Day. 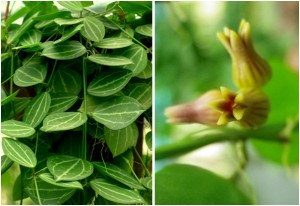 This plant is commonly called the Watermelon Dischidia due to the appearance of its foliage - the leaves resemble watermelons with three stripes running across them. They often take on a nice reddish tinge when exposed to several hours of direct sunlight. Its flowers are small and produced between a leaf and the stem (right).
This plant is often presented in a hanging basket either with its stems trailing or wound round the basket supports. 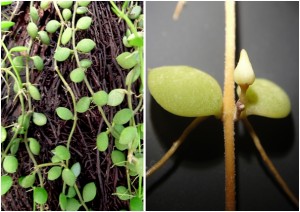 Dischidia nummularia are sometimes seen growing on old tree trunks. A native of Singapore, its common names include Pebble Beach and Button Orchid - a misnomer as it is not at all an orchid.

This plant has wiry stems adorned with tiny leaves shaped like convex magnifying lenses. Its flowers (above right) are small and often overlooked. Not commonly sold in nurseries, its stems are grown wound round pieces of driftwood or coconut husk chunks. 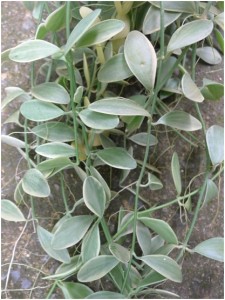 To date, this species does not have a common name. The variegated version (labelled as Dischidia ioantha 'Variegata') is more readily available for sale, probably due to its more showy and decorative appearance.

It features trailing stems with oval leaves with white edges. It is often grown with its long stems wound round some coconut husk chunks.

Location
Dischidia species prefer a humid and well-ventilated location with at least half a day's exposure to filtered sunlight. They can tolerate a couple of hours of direct sunlight but plants must be well-watered under such conditions. Avoid growing them in an overly windy place as the plants will dry out very quickly.

Water & Growing Media
These plants are best grown in a moist and porous growing medium. The most common material used is coconut husk chunks. Being epiphytic in nature, they prefer to dry out a little between each watering. Avoid using soil-based growing media as they often hold too much water and become compacted.

Support
Climbing Dischidia species can be grown by winding the stems around its hanging pot's hangers, thin branches or a moisture-retentive, rough and porous surface, such as the bark of a tree. These may be cut back to prevent the plant from growing into places where they are not desired.

Propagation
Dischidia are easily propagated from stem-cuttings. Cut short segments of the stem and let them heal and dry. Then put them on top of some moist sphagnum moss - strings may be needed to secure them in place. The stem cuttings should be placed in a protected place away from direct sunlight and wind with the sphagnum moss  kept moist at all times. Once roots have grown and the cuttings show some growth, they can be moved to their final locations.

The plants can also be grown from seeds which are produced in pods that split when mature. The seeds have fine hairs attached that enable the wind to carry them away.

Hi Beatriz, Yes, you should be able to separate your Dischidia by cutting it. But take care to root the cuttings in a more porous media and not heavy clay soil.

Hi Paula, There are numerous shops at Chatuchak Market in Bangkok that you can visit that will sell Dischidia and Hoya plants. The last time I checked, the plant market is only opened on Wednesdays and Thursdays. Pay a visit to the market and see if you can get species or cultivars you are looking for!

Hi David, Apologies for the delayed reply. But here's what I found out: Unlike many vegetables and bedding flowering plants, Dischidia seeds are not commercially available for sale in small regular seed packets. You may want to search for and reach out to specific plant collectors in the area where you are staying and ask if they have seeds or stem-cuttings to sell you. Most species propagate easily from stem-cuttings. I hope we have been of some assistance.

Dear Dr. Wong, You are spot on about the leaves of the Million Heart Plant turning a red tinge under exposure to strong sunlight! In fact, the side of the plant that is nearer the window has leaves that turn red (heart shape centre) in the centre. The plant is starting to flower, about 8 months after I bought it from nursery. They are very cute, tiny &amp; white non-scented flowers. I wish I could post the images here, they are self-explanatory! :)

I was given a dischidia pectinodes as a gift last year, and it produced seeds. It’s such a cute little plant I wanted to grow more so I planted the seeds in coconut husk, and individually in very small containers (half of a plastic easter egg). This was last October, now almost a year later they are only about an inch tall and only one is growing a vine. I have about 24. I live in San Diego, CA by the coast there is some humidity but it’s generally pretty hot and dry. I have them in a south facing window that gets bright indirect light. I have not been fertilizing and am not sure what to use. I mist them every couple of days and let them dry out for a day or two in between waterings. is it normal for them to grow so slowly? Is there something I can do to make them grow better?

hi, i´ll visiting Bangkok next march, do you know if there exist any grower who could provides me with Dischidia cuts and hoya Kerry sedes? I´m from Argentina, I couldn´t find any information. Thank you very much Paula

Hi Jesse, My colleague, Dr Wong, would like to first qualify that his understanding of the plant’s growth requirements is based mainly on his observations of the species as grown in the tropics in Singapore. For your dischidia, you may want to add some sphagnum moss to the coconut husk that you are growing them in. The sphagnum moss may help to retain more moisture at the roots for your plants. Any significant drying out of the root zone can lead to stunted growth. For fertiliser, you can safely use slow-release fertiliser pellets like osmocote. You can put the pellets in a meshed net hung just above the root zone (see <a href="http://mygreenspace.nparks.gov.sg/how-to-fertilise-your-orchids-the-easy-way/" title="How to fertilise orchids" rel="nofollow">link</a>). As for light, this plant prefers to get some filtered sunlight daily, so you may want to move your plants to areas with more sunlight, but gradually over time to acclimatise them to higher light levels.

Hello, Do you know where i can find a variety of dischidia seeds for sale online? thank you, David Meyreles

Thank you Dr.Wong for all your hard working effort and plant info. We import these cute Dischidias from Thailand to Florida. We love them personally and we got a lot of compliment from our customers too. We sure learn a lot more from you.

Hi Patrick, The Dischidia vidalii is a tropical plant. It may survive as long as the area where it is grown does not drop below 20 deg C. If it's grown near a window, try and make sure it doesn't come into contact with a cold window pane.

Hello, I came across a Dischidia vidalii yesterday and was so enamoured that I bought 2 of them. I live in Tokyo and have no concerns about the plants thriving in the summer. But winters can get chilly here and I wonder if they'll survive especially as I don't normally heat my apartment during the day. Thank you