Home to the largest primary forest in Singapore and a remarkable range of biodiversity, the land upon which the Bukit Timah Nature Reserve now sits used to be one of the first eight forest reserves overseen by the Forest Department of Singapore in the late 1800s.

Conservation efforts since the founding of Singapore in 1819 have protected the area and helped to retain much of the local flora and fauna found within. Established in 1883, Bukit Timah Forest Reserve was one of the first forest reserves to be created in Singapore, as recommended by Nathaniel Cantley, then the Superintendent of the Singapore Botanic Gardens.

Today, the Bukit Timah Nature Reserve is protected under the Parks and Trees Act, and was officially declared an ASEAN Heritage Park in 2011. The 163-ha reserve retains one of the few areas of primary rainforest in the country and is home to a high percentage of our nation’s native flora and fauna,

There are many trees within the Bukit Timah Nature Reserve that we would not be able to see up close today, had there not been such conscientious efforts to protect forests in Singapore since the late 19th century. Here are some of the remarkable trees you can find in the Reserve. The Seraya is a dipterocarp forest species.

More than 150 Years Old
Did you know that one of the Seraya (Shorea curtisii) trees located in the forest is said to be at least 150 years old?

The Seraya is a member of the dipterocarp family, a group of forest tree species that is increasingly under pressure from extinction due to deforestation throughout the region. The Seraya usually grows at altitudes of 300 to 800 metres, making it the most common and easily distinguished tree in this forest type.

However, it may also be found at lower elevations on coastal hills. This is the case for Bukit Timah Nature Reserve, where the Seraya is the most abundant dipterocarp species and has the potential to grow up to 50 m! The Seraya can also be found in the Central Catchment Nature Reserve and at the Singapore Botanic Gardens.

The buttressed roots of the Keranji.

Kidney-shaped Fruit
Another tree species protected within the Bukit Timah Nature Reserve is the Critically Endangered Keranji (Dialium indum). Also known as the Velvet Tamarind tree because its fruit tastes similar to that of the Tamarind (Tamarindus indica), the Keranji was commonly found all over Singapore in the first half of the 19th century.

The buttresses at the base of the tree are an evolutionary adaption to provide additional support, and the Keranji can grow up to 40 m. Kranji Road is named after this native tree.

See if you can find the Keranji along the main road in the Bukit Timah Nature Reserve (Rifle Range Road) – its seeds are square or kidney-shaped, and around the size of a ten-cent coin. The seeds of the Keranji.
Photo credit: Ang Wee Foong

The ‘Hole’ Truth
While exploring the different trees in the Bukit Timah Nature Reserve, you may come across a peculiar-looking tree which has what looks like several holes all around its trunk. This deeply fissured trunk surface belongs to the Meraga (Pertusadina eurhyncha), a vulnerable native tree species of the Rubiaceae family that can grow up to 30 m.

The Latin word, pertusadina, means having holes. As these trees grow older, the core of the wood disappears and eventually, the trunk may become a hollow cylinder of latticework, a distinct feature which is easily recognised.

There is currently one individual of the Meraga that has been listed as a Heritage Tree in Singapore. Standing at 18 m, this Meraga can be found in the Rainforest at the Singapore Botanic Gardens. The flowers of the Klochus.
Photo credit: Pauline Tay

Food Plant for Caterpillars
Next is the endangered Klochus (Cratoxylum cochinchinense), a tree species important to local biodiversity, as it is the preferred food plant for caterpillars of two native butterflies, the Archduke (Lexias pardalis) and the Common Grass Yellow (Eurema hecabe contubernalis).

The trunk of the Klochus has smooth, thin and flaky bark. This is an adaptation to prevent epiphytes from gaining a foothold on the tree, as large numbers of epiphytes could cause immense stress on the tree due to their combined weight. Any epiphyte that manages to latch onto the trunk is shed with the bark, which peels off when it gets too heavy.

When in bloom, its faintly fragrant flowers can be easily spotted by their deep crimson to pink or pink-yellow petals. They are usually found in pairs on flowering shoots, at branch tips or at the angles of leaves.

The seedpods of the Kungkur.
Photo credit: Ang Wee Foong 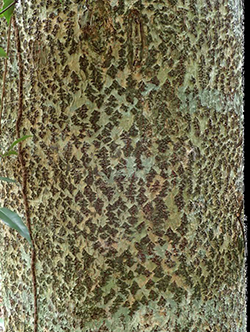 Diamond-shaped fissures on the bark of the Kungkur.

Look for the Seedpods
If you chance upon these on the ground, you may be in the vicinity of the Kungkur (Albizia splendens). A member of the Fabaceae or legume family, the Kungkur tree produces these massive irregular-shaped seedpods with very thick and hard seed coats. These seedpods can range from 18 to 30 cm!

Also classified as Endangered in Singapore, the Kungkur can grow up to 50 m and is easily identified in the forest by its greyish bark with diamond-shaped reticulated fissures.

Did you know that the first part of its scientific name, Albizia, commemorates the 18th century Italian botanist, Fidel Albizzi? The second part of its name is the Latin word splendens, which means ‘splendid’, an apt description for its magnificent height. The leaves and flowering shoots of the Petaling.
Photo credit: Ang Wee Foong

Petaling Jaya’s Namesake
A vulnerable evergreen tree species, the Petaling (Ochanostachys amentacea) is fairly common as an understorey tree of around 30 m. In rare cases, it can grow up to 50 m to reach the canopy of a primary forest. The trunk of this slow-growing tree takes about 150 years to reach a diameter of 50 cm.

The Greek word ochanostachys means spike, referring to the Petaling’s long and slender flowering spikes with small flowers. Spirally arranged, the egg-shaped leaves of the Petaling are leathery with blackish dots on both surfaces of the leaf blades.

If the name Petaling rings a bell, that’s because Kuala Lumpur’s township, Petaling Jaya, is named after the tree which was once commonly found in that area.


The Importance of Trees
Back in the late 19th century when the Bukit Timah Reserve was first planted up, the most important local trees were the Tampines Meranti (g. Shorea) and Kulim (Scorodocarpus borneensis). Imported trees include teak, as well as the African gum copal (Hymenaea verrucosa), mahogany (Swietenia macrophylla), Brazilian ironwood (Libidibia ferrea) and the American Rain Tree (Samanea saman). The key feature of each tree was that it was supposed to have an economic value.

Today, the Bukit Timah Nature Reserve stands as an important reminder and model of the importance of conservation, both in Singapore and the region. Without these efforts to protect native tree species, not only would we be at risk of losing significant native flora, we would also potentially lose the native fauna that depend on these plants for food.

The next time you visit the Bukit Timah Nature Reserve, stop for a moment to admire these magnificent trees and appreciate their important role in sustaining local biodiversity.


Learning More
Interested in learning more about trees that make up our urban forest? Check out trees.sg, our online map which shows the locations of over 500,000 trees, features interesting bites of information on unique tree species, and even lets you show some love to your favourite tree by leaving it a treemail and giving it a hug!