Singapore is home to many different animals and plants but not all of this flora and fauna you see around you is native. In fact, there are many species that, though commonly seen and have become very much part of our surroundings, did not originate here.


What are Non-native Species?

Some non-native species are said to be invasive as they can adapt well in a new environment that they were introduced to, establish and spread, resulting in negative impact on local biodiversity. One such problem is that they may threaten the livelihood of native plants and animals by predating or competing with the native species, upsetting the ecosystem’s balance.

Also, non-native species are costly to manage and they could endanger human health if they harbour foreign pests and diseases and proceed to spread them to the local biodiversity. There is also a risk that they might hybridise with native species and produce negative genetic impact.

While some non-native species may be dangerous for our local biodiversity, there are also some that are completely harmless.

Here is a list of some flora and fauna that can be found in Singapore. Can you guess which are the native species, and what impact non-native species may have on the ecosystem? 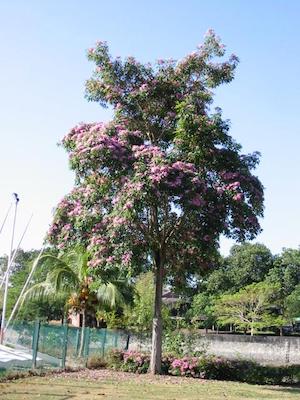 Known as Singapore’s cherry blossoms due to its beautiful, trumpet-shaped, pink and white flowers, the Trumpet Tree (Tabebuia rosea) is a non-native species. It originates from Mexico and grows to about 18 to 35 m tall locally. It can be easily recognised by its large conical and shady crown.

The tree’s flowers are induced by a dry spell that usually occurs in April and August. This tree was purposefully introduced into Singapore and planted by the roadsides, for its beautiful flowers and because it provides excellent shade, particularly during our sunny afternoons. 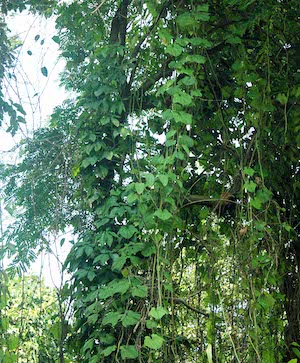 While there are many species of yams native to Singapore, the Zanzibar Yam (Dioscorea sansibarensis) is not one of them. This species was introduced from Africa and is a climbing plant with large starchy underground tubers. It propagates mainly through the production of aerial bulbils. If unmonitored, this climber is extremely fast growing and able to spiral up tall trees and smother the entire canopy with a ‘bat-shaped’ foliage.

Its blanket of leaves prevents other plants from receiving sunlight, affecting their chances at survival. Without human intervention, there is very little chance that the forest or ecosystem can solve this problem naturally.

In Singapore, the persistence of Zanzibar Yam can be seen in the Singapore Botanic Gardens’ Rain Forest with it growing in many areas such as along paths, roads and clearings. Hence the removal of Zanzibar Yams is a priority.


If you are keen to learn more on how difficult it is to manage a species like the Zanzibar Yams, you can read this article. Although the Rain Tree (Samanea saman) is one of the more iconic trees in our City in Nature, it is actually not native to Singapore. It originates from South and Central America and was introduced to Singapore back in the 1870s.

The Rain Tree can be identified by its distinct umbrella-shaped and wide-spreading crown. This ability to provide shade is a key reason why the Rain Tree has been mass planted throughout the tropics. The trees are often planted in rows along the roadside or streets, creating a green tunnel effect. The leaves of this tree fold up at night or during rainy days when the sky is overcast, and it produces snowy white and pink flowers. 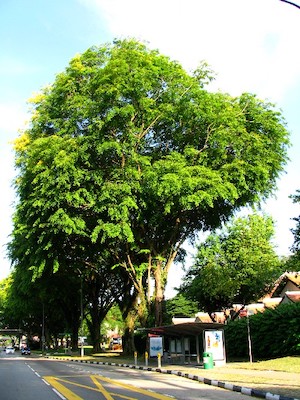 An extremely commonly seen tree in Singapore is the Angsana (Pterocarpus indicus). It is also one of the earliest Asian trees that was planted in the city. As many Angsana trees were planted back in the 1960s and 1970s, many of them are reaching maturity now, standing at heights of about 15 to 18 m. Some of these trees can even grow up to a staggering 40 m in height!

Easily spotted by its dense, drooping crown of leaves, the Angsana has a rose-like scent and produces one of the most popular woods used for furniture in Malaysia. Interestingly, when the bark of this tree is damaged, it releases a thick red liquid that resembles blood. The Angsana produces bright yellow flowers in huge bunches that grow to about 15 to 30 cm long each. The floral buds of the Angsana develop high up on its crown and often go unnoticed until triggered by the right stimulus. Then they open simultaneously, forming a bright crown of yellow blooms.

This display only lasts for a day and after which, the flowers will fall off creating a soft carpet of yellow beneath the tree. 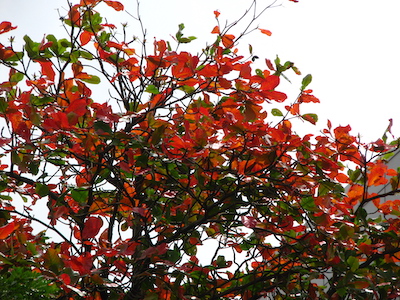 As you walk along our streets and in the parks, you might see a pagoda shaped tree with a large buttress. This is the Sea Almond (Terminalia catappa), a native coastal species found naturally along the seashores and in mangroves, as well as planted alongside our roads as well.

This tree is semi-deciduous, meaning it sheds its leaves twice a year. As the leaves become aged, they turn a reddish shade, mimicking the act of seasonal change and giving sunny, topical Singapore an autumnal feel. The Sea Almond also produces a corky fruit with a single seed at the centre with a flavour that resembles the taste of almond, giving this plant its common name! 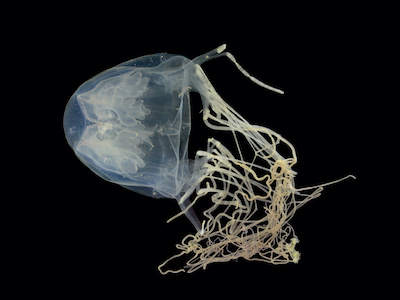 
Box Jellyfish is an umbrella term for around 50 species of jellyfishes that are usually found around the Indo-Pacific region, in the warm coastal waters off northern Australia. Recently, these native creatures have been making an appearance in Singapore’s waters, mainly in the Sentosa and East Coast Park area.

The Box Jellyfish is one of the most venomous marine animals and some of these species have stings that are potentially life-threatening and lethal. However, the severity of symptoms varies with each sting victim's condition and the degree of stinging.

Some species of Box Jellyfish are cuboid in shape, and they resemble bells. They are often transparent, with a paleish blue colour and able to grow up to 2 kg in weight and 3 m in width. These creatures can travel swiftly through the waters by propelling themselves forward, making them dangerous predators.


For more information on how to spot symptoms of Box Jellyfish stings ,what precautions to take against getting stung and what to do when stung, click here. If you see a black bird flying around Singapore, there is a high chance that it is a Javan Myna (Acridotheres javanicus). Since its introduction back in the 1920s via the caged bird trade, the Javan Myna population has grown rapidly and it is now one of the most common birds that can be found in Singapore.

The Javan Myna is a highly adaptable species that has colonised different habitats in Singapore, most notably urban areas. It is an omnivore that feeds on insects and fruits, and is also capable of scavenging for human food. This aggressive competitor may compete with other native birds for food and nesting resources. 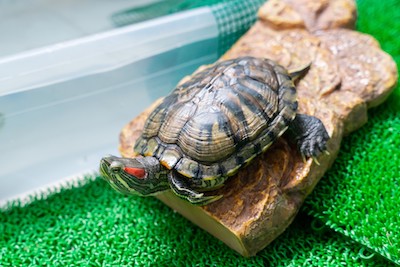 While turtles are common pets to rear, one of the most commonly seen turtles, the Red-eared Slider (Trachemys scripta elegans) is not native. It is native to North America and has been regarded as one of the “World’s 100 Worst Invasive Alien Species”.

It is able to survive in a large range of freshwater habitats including highly disturbed waters, and its omnivorous diet creates competition to other local aquatic fauna species. Many of these turtles are discarded by irresponsible pet owners when they grow beyond their tank size, resulting in the large numbers in our water bodies. 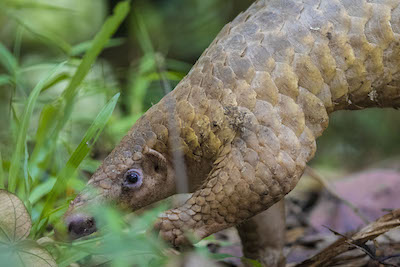 
The Sunda Pangolin (Manis javanica), also commonly known as the scaly anteater, is native to Singapore. It can be found feeding on termites and ants at the Central Catchment or Bukit Timah Nature Reserves. However, sightings are uncommon and it is Critically Endangered. There are eight different species of pangolins around the world and all of them are highly trafficked for their scales and sometimes as a food source.

The Sunda Pangolin has a long sticky tongue that aids in gathering ants, termites and other small insects that make up its diet. It has an outer covering of scales that are made of keratin, the protein found in our fingernails and hair. When threatened, pangolins curl up into a ball to hide the vulnerable areas of their body that are not protected by scales, defending themselves against predators. 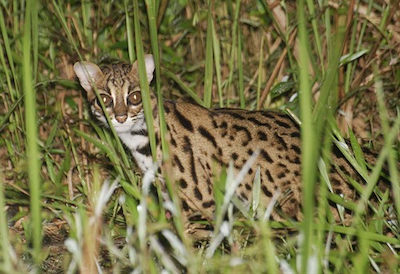 Do you know that the Leopard Cat (Prionailurus bengalensis) is native to Singapore? It can be easily distinguished by its yellow fur, blackspots and huge rounded ears. Its diet consists of lizards, rats, frogs and birds and has been recorded in the Central Catchment Nature Reserve, Pulau Tekong and Pulau Ubin. It is the last wild cat species found in Singapore.

It is Critically Endangered mostly due to the loss of its natural forest habitat. Throughout Asia, it has also fallen victim to the illegal wildlife trade where it is hunted for its fur and bones or sold as pets.

Were you able to correctly identify if these plants and animals were native or not? To find out more about native and non-native species in Singapore, check out the resources here and here.

Learning More
If you are heading to our green spaces, do the right thing and be socially responsible. Maintain a safe distance from other park goers and keep to not more than five persons in a group. Always wear a mask except when you are engaged in strenuous exercise or when consuming food, drink or medication.