A spider research group has been formed to record and document spider species that can be found in Singapore, starting with Sungei Buloh Wetland Reserve. Only a small percentage of Singapore's spiders have been named and identified.

The two spider species, which the group hopes to document and record, are the trapdoor spider and the Eight-spotted crab spider; both are endangered species according to the Red Data Book. 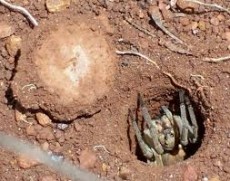 On 25 Feb 2009, Mr David John Court, an honorary research associate at RMBR (Raffles Museum of Biodiversity & Research), gave the newly formed spider research group a workshop on spiders in Singapore. The group went on a two-hour field trip and a slide presentation on spiders.

The field trip was exciting as Mr Court shared techniques and methods in collecting spiders in various habitats. Here you can see Mr Court searching through leaf litter to find spiders. His favourite equipment is the umbrella!

The group will organize spider macro photography throughout the year for volunteers. If you are interested to join in the photography sessions, please contact Mendis Tan at mendis_tan@nparks.gov.sg.