An Escape Into The Southern Ridges

At the end of a tiring work week, I took Friday afternoon off, and headed to Harbourfront MRT. Instead of indulging in retail therapy at the nearby malls, I was embarking on a solitary retreat in a world of green.

I sneaked quietly into the woods behind the MRT station, armed with the DIY Guide to The Southern Ridges – a rich source of useful information on my verdant journey. It was with the aid of this guide that I had already planned, in advance, the route I intended to explore.

Starting from the Marang Trail, I hiked up the 70-metre elevation of Mount Faber. The distinctive high-pitched singing of the cicadas kept out the noise from car engines whizzing by VivoCity, showing off nature's excellent sound-proofing technique.

Emerging from the earthen path, I marvelled at sights of the sea, ships and even Sentosa. The air smelled crisp and clean at this height, and I filled my lungs with long, deep breaths before circling a tranquil Faber Walk.

At the Southern Ridges, visitors are asked to take nothing from nature but photographs. As an aspiring photographer, I gladly complied. I paused often to capture scenic moments on camera, thus exceeding the estimated walking times indicated in the DIY guide. I aimed high at the expansive sky dotted with variance of foliage; I squatted low and peered from awkward angles at the spread of nature before me.

Through my lens, bees and ants danced to a busy pollen beat, luring me inwards to the colourful world of stigmas and stamens. Long, dangling bean pods shook before me, like charming music pipes.

I was abruptly cornered by a sudden downpour, so I took refuge at a pavilion, from which I admired the colonial architecture of the Danish Seaman's Church. As the rain cleared, the resultant light and moisture particles collided to create an enchanting rainbow.

While ‘surfing' the Henderson Waves, I joined a steady flow of energetic joggers, sun-kissed tourists and brisk-walking retirees, all traversing the bridge in happy strides.

On the zig-zag paths of the Forest Walk, water droplets clung affectionately to small flowering bulbs, sparkling like priceless gems. These beautiful micro perspectives melded with the picturesque views to create an exhilarating experience within this urban escape.

Dusk was falling by the time I emerged from Alexandra Arch, feeling deeply reposeful and rejuvenated by my sojourn through the wide expanse of greenery. With my springs unwound, I felt ready to take on anything that the following day might throw at me.

The writer is an NParks volunteer. If you love all things green and would like to write for My Green Space, contact us here. 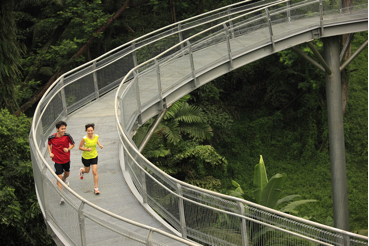 As its name suggests, the Forest Walk provides joggers with a spectacular trail right through the heart of the forest. 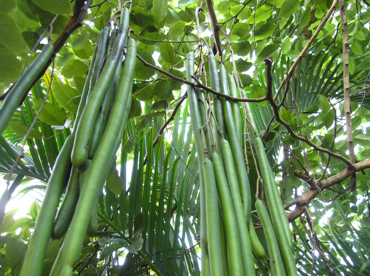 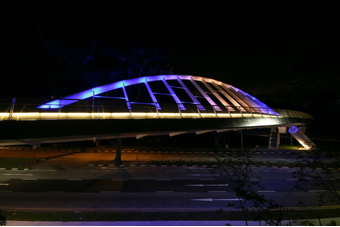 The splendidly-lit Alexandra Arch, after nightfall.