A Most Odd Tree Doctor!

In a previous issue of My Green Space, we featured arborists, who inspect trees to see if they are healthy. Besides these human “tree doctors”, there is also a species of birds that carries out a similar job. Meet the Laced Woodpecker, a bird that plays an interesting and vital role in maintaining the health of trees.

Laced Woodpeckers have strong bills with chisel-like tips which they use for drilling and drumming trees. They also have long and sticky tongues for extracting insects, and sharp clawed toes and stiff tails, which enable them to climb vertically on tree trunks. These unique characteristics were adapted for arboreal feeding (i.e. feeding in trees). As such, they can spend most of their time moving within and between trees, excavating insects and playing an important role in the ecosystem by keeping trees healthy from potential insect infestations.

Because they are known to feed on trees, it came as a surprise to see Laced Woodpeckers (Picus vittatus) foraging on the ground on two separate occasions. The first occasion was at Bukit Batok Nature Park in April 2010.A group of parks officers observed for about ten minutes as the bird actively hopped on the forest floor probing for food. This was in spite of the high human traffic less than a metre away, as this park is popular during the early mornings. Occasionally, the bird would cling onto a vine or tree root for support.

Three months after the first encounter, another Laced Woodpecker was seen exhibiting such behavior at Labrador Nature Reserve. These observations suggest that this bird could have developed an alternative foraging strategy in a group of mostly arboreal birds.

This foraging behaviour in the Laced Woodpecker has been documented in at least two publications: “The Birds of Thai-Malay Peninsula” and “A Field Guide to the Birds of West Malaysia and Singapore”. Another similar observation was documented at Telok Bangah Hill Park, and recorded on the website of Bird Ecology Study Group of the Nature Society (Singapore) in August 2010.

Foraging on the ground may be more common than we previously realised, for this woodpecker species. If you happen to visit the more forested parks and the nature reserves, do look out – in high locations as well as low ones – for this interesting little tree doctor!

Woodpeckers belong to the family Picidae. Out of the 200 over species recorded worldwide, seven of them are found in Singapore.

Within the same family, there are also three species of true ground woodpeckers but none of them occur in Singapore. One such species is the Ground Woodpecker (Geocolaptes olivaceus) of South Africa, which excavates tunnels in the banks of watercourses, and feeds on insects in the barren and steep hills of South Africa.

Despite the decline of the Laced Woodpecker’s core habitat – mangroves and coastal woodland – there is an overall increasing population trend for this bird species. This was recorded in the State of Singapore’s Wild Bird and Bird Habitats, which is based on ten years of bird census data collected by the Nature Society (Singapore).

Besides the Laced Woodpecker, an on-going monitoring effort by NParks has recorded some 70 species of birds for both Bukit Batok Nature Park and Labrador Nature Reserve. This accounts for around 20% of the total number of bird species recorded in Singapore.

Text and photos by Benjamin Lee and Yoh Yuet Hsin

A view of Bukit Batok Nature Park, where the Laced Woodpecker was first seen foraging on the ground.

Look up – the Laced Woodpecker is an arboreal feeder, which means that it sources for food in trees. Look down – this Laced Woodpecker was sighted while foraging for food on the ground, instead of in trees. 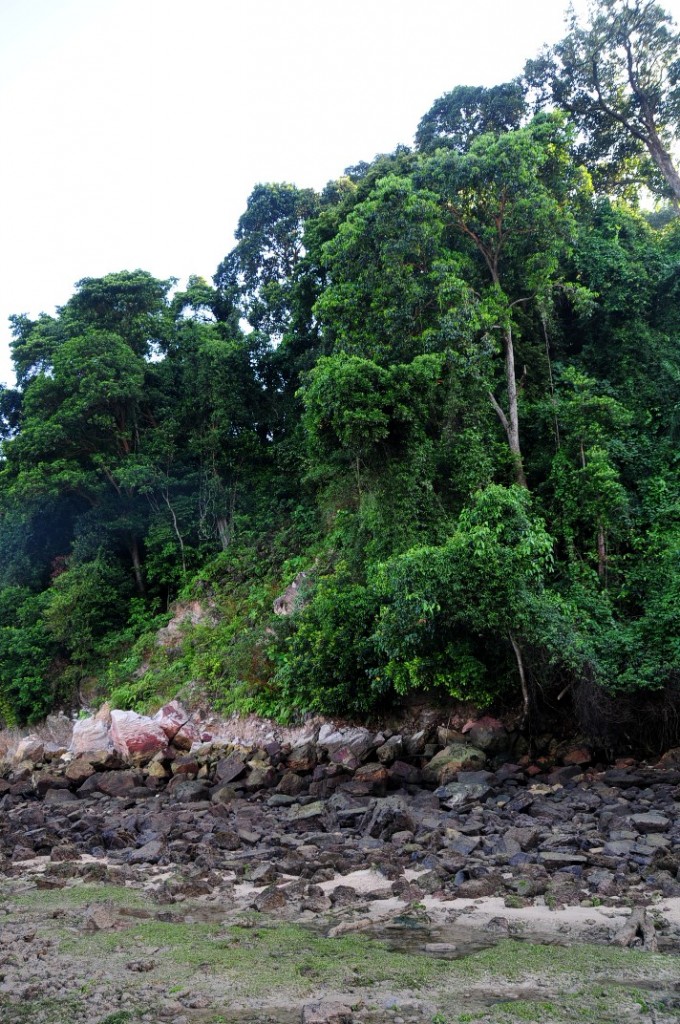 The Laced Woodpecker’s core habitat comprises mangroves and coastal woodland, which can be found at Labrador Nature Reserve.

Many thanks for this!!