Having Fun in an Outdoor Classroom

It was a hot Saturday morning, but both kids and parents were enthusiastically turning over lily pads looking for pond snail eggs, squealing with delight when they found their targets.

And we were just into the first 10 minutes of our hour-long exploration of the Jacob Ballas Children Garden (JBCG) in the Singapore Botanic Gardens, one of the specially crafted Learning Journey activities for children.

Our guide, Salina bte Jailani, cheerfully guided the group of 10 to 12 kids, all below the age of 12, and their adult minders, round the garden. Every now and then, she would pause by a plant, fruit or tree, to ask, "Do you know what this plant is?"

For instance, she pointed to an annatto tree laden with fruit and asked if they knew what tree it was. A few of the children replied, "Rambutan!" 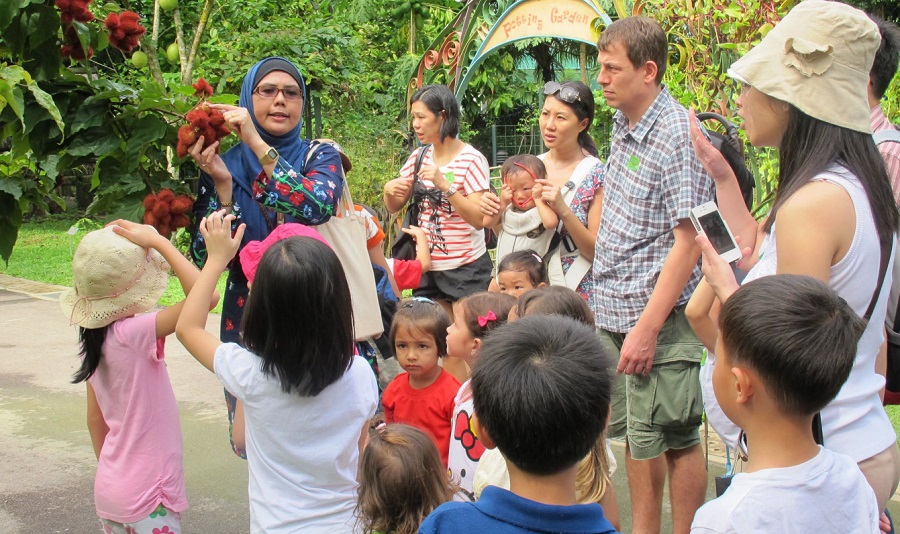 Salina describing the shape and uses of the annatto fruit to the participants of the guided tour.

Salina then proceeded to explain why they were wrong. She pointed out the difference in the shape of the fruits - rambutans are rounder, while the annatto fruit had pointed ends, and explained how the seeds of the annatto fruit are crushed to produce red dye.

Getting the children and parents to use their senses, Salina had them touch furry brinjal (aubergine or eggplant) and bittergourd leaves and pat mimosa leaves to 'sleep'; she gave them small sections of pandan, lemongrass, laksa and curry tree leaves to smell; and she used one of the giant leaves of the elephant yam to fan her audience while describing the plant. 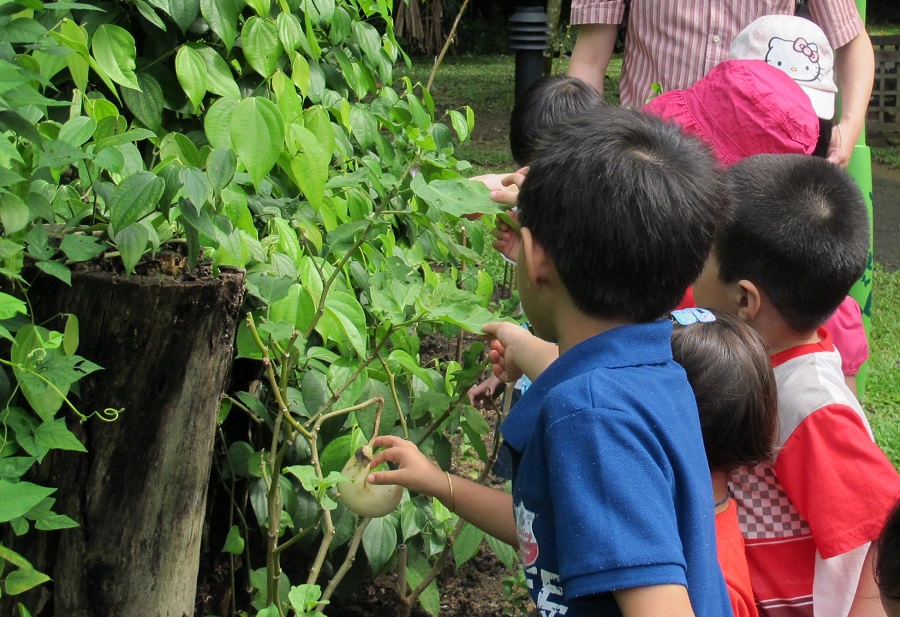 The children got a feel of the textures of the brinjal and bittergourd plants.

It wasn't just plants the participants learnt about. The differences between a dragonfly and damselfly were highlighted. Salina even spread her arms wide to show how dragonflies rest with their wings open, and putting her arms close to her body for damselflies at rest. Buzzing bees were also pointed out and the different varieties of bees briefly described. 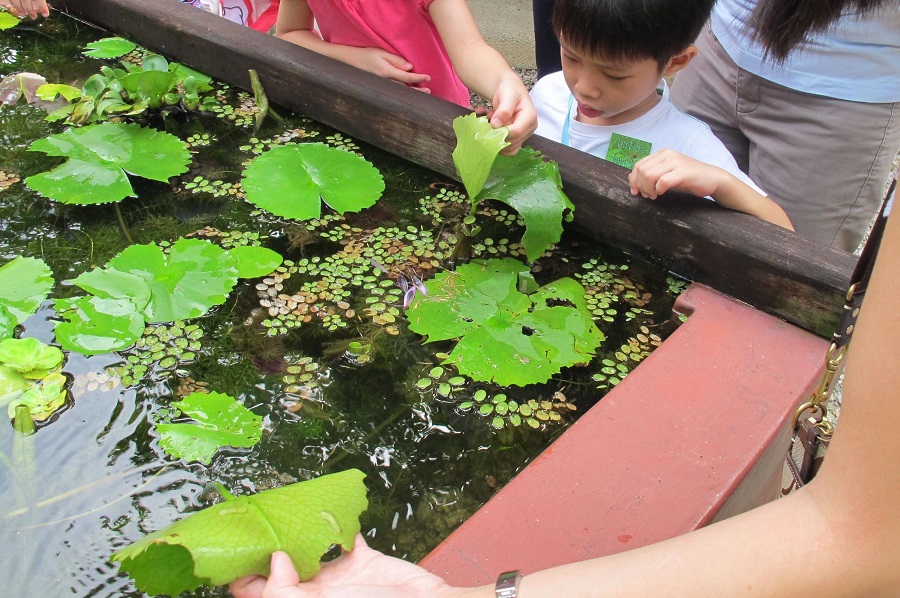 Some of the participants had fun turning over leaves to look for the eggs of the pond snail.

When it came to the pond snail eggs, participants were encouraged to look for and feel the jelly-like eggs stuck to the bottom of the lily pads. As one boy protested at touching them, Salina gently chided, "If you want to learn, you must touch!"

An enriching experience for everyone

It was an eye-opening session even for some of the parents. Mrs Joy Lim, who was accompanying her daughter and son, aged 7 and 4 respectively, had previously visited JBCG. "But the guided tour was more enriching and interesting because it involved interaction," she said.

Salina said that she sometimes would extend the tour to include a visit to the Eco-lake, where she can highlight the white-breasted waterhen and black swans. But this would depend on the interest of the children in the group, which in this case started to wander towards the end of the hour.

Still, it was time not wasted for some of the kids. As the group broke up, children could be heard happily reciting to their parents what they had seen, touched or smelled in the last hour, while others wanted to stay on to see more of the garden.

Check out the different types of Learning Journey activities conducted at our parks, park connectors and nature reserves. These activities have been crafted to suit children and students of different age groups, and they cover a range of topics, such as history and nature, knowledge of flora and fauna.

Already, technology is taking up a larger amount of young people’s time — one study showed that teenagers spend 7.5 hours using some sort of media and one-third of that time multitasking, double the time just five years ago, Harmon said. It’s important, she added, that schools find ways to engage students through outdoor learning activities.“While parents are the number one influencer, school programs also have an influence, and schools have room to be more influential,” she said.Barnard Elementary School in Washington, D.C., is an example of school that has successfully integrated outdoor activities into its curriculum. Principal Grace Reid said that she applied for grants to help teachers make outdoor education a part of their lesson plans.