A Voice for the Natural World

Ask anyone from the public of what they think nature conservationists look like, along with the nature of their work, and you'd probably get a particularly unflattering response.

There may be more than a few people out there who have a mental image of conservationists as being hard-line tree huggers who selfishly disregard people's needs for nature's sake. While there may be people like these out there, many conservationists are perfectly respectable people who do a great service to both nature and people.

Joey Gan, a National Parks Board conservation manager stationed at Bukit Timah Nature Reserve, is one such individual. His responsibilities, according to him, is a mixture of "spending time in the forest" conducting surveys on the flora and fauna, as well as administrative work duties in the office. The aim he says, is to 'safekeep' the reserve, as well as the two nature parks adjoining the reserve - Hindhede and Dairy Farm.

Up on a tree: Joey Gan doing a tree inspection in the Bukit Timah Nature Reserve.

His administrative duties include managing the size of groups entering the reserves - groups of 30 or more require permits - or issuing research permits for educational institutions. Work in the field includes tasks like maintenance work to ensure that the reserve's infrastructure is in relatively good condition, such as mending eroded trails and conducting tree inspections.

Joey has been involved in various projects in his time with NParks. However, his most memorable project was the camera trap surveys conducted as part of the Eco-Link@BKE project, which is meant to physically reconnect the Bukit Timah Nature Reserve to the Central Catchment Nature Reserve, which had been separated by the construction of the Bukit Timah Expressway (BKE). The Eco-Link is expected to be completed this year.

Fauna surveys have been conducted on both sides of the BKE to find out what animals can be found in both nature reserves. This same set of surveys would be conducted after the bridge is built. The data will then be analysed to assess the effectiveness of the link.

An aerial view of the upcoming Eco-Link@BKE that will reconnect Bukit Timah Nature Reserve to the Central Catchment Nature Reserve, after they were separated by the construction of the Bukit Timah Expressway (BKE).

To carry out the survey, Joey and his colleagues set up camera traps in a grid pattern in the forests. These cameras were equipped with motion sensors and took the photos of animals that moved past them. 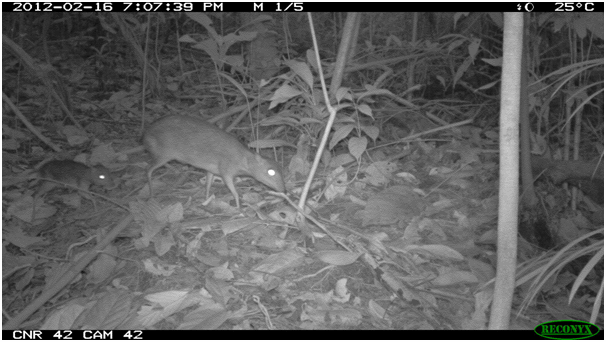 Caught on camera - a mousedeer and its young!

Joey recalled, "They [the cameras] acted like our eyes in the forest and we left them there for a month. After that we would go back into the forest to retrieve the cameras and download the images."

So far, the cameras have recorded the presence of shrews, pangolins and mousedeer, all of which are shy, nocturnal animals.

Another shy, nocturnal animal captured on camera, the pangolin can be found in Singapore's nature reserves.

Besides the enjoyment he gets from being in the forest, the best part of being a conservationist for Joey is being able to share the knowledge he has with visitors, and seeing the smiles on their faces when they learn something new and interesting. That, for Joey, is one of the satisfactions he derives from a job that most people don't quite understand.

However, sometimes he receives demands from the public that he finds unreasonable.For example, he is bothered by the number of people who fail to differentiate between a nature reserve and a park and wonder why amenities such as washrooms aren't aplenty. Also, Joey had something to say about the view of conservationists being tree huggers.

"I think there must be a shift in the way we view this world: we are a part of nature and not apart from it." Joey adds that with this shift in thinking comes true change for the better". Joey has already invested four years towards achieving his goal, and he will certainly put in many more years as a conservationist, or as he puts it, "the voice for the natural world."

If you are interested in being a member of the Conservation team at the National Parks Board, look out for career opportunities online.

By Zainal Ariffin Bin Asman
Photo of aerial view of Eco-Link @ BKE by How Kien Chin.