You might have come across orchids at the Singapore Botanic Gardens or being sold at nurseries, but have you had the opportunity to admire orchids in your own backyard? If you haven't, it's time to look around you as you stroll down Singapore's shady roads.

Since 1995, the Micropropagation in Research and Conservation Branch of the Singapore Botanic Gardens (SBG) has been planting orchids along our roadsides and parkland. Thus the team managing the Park Connector Network (PCN) took the opportunity to jump on the bandwagon to have orchids take root along the PCN.

Geylang Park Connector located along Kampong Arang Road was identified for this purpose in August 2012.  The proposed planting site was located next to the Geylang River which made it sufficiently exposed and windy, conditions which are ideal for orchids to thrive.

The project spanned two months, from the planning to the actual planting on site.

During the planning stage, the PCN team made a couple of joint-site visits with the SBG orchid team to identify choice trees for the planting. Some of the tree species selected were the Rain tree (Albezia saman), Yellow flame (Peltophorum pterocarpum) and Forest Ordeal tree (Erythrophleum suaveolens).

After the trees were chosen, we gathered materials such as nails, horticultural wire, as well as equipment such as ladders and even a crane lift. The orchid team improvised with nails and horticultural wire to get the plants to adhere to the tree branches.

This arrangement allowed the orchids to stay in place much better than if cable tie was used. During the two planting days in October last year, Dr Yam Tim Wing, Senior Researcher at the Conservation and Molecular Biology, led the team of 13 staff and workers in the project,  giving directions and instructions on how the orchids should be planted. 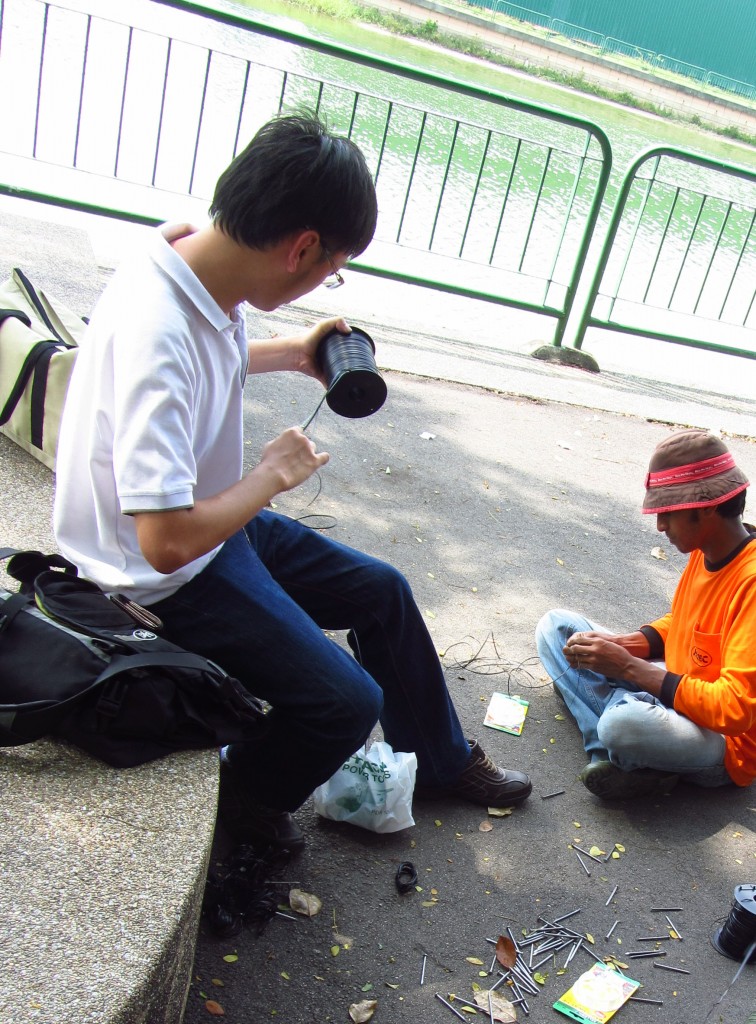 The orchid team working with horticulture wire and nails to improvise ways of securing the orchids to the trees. 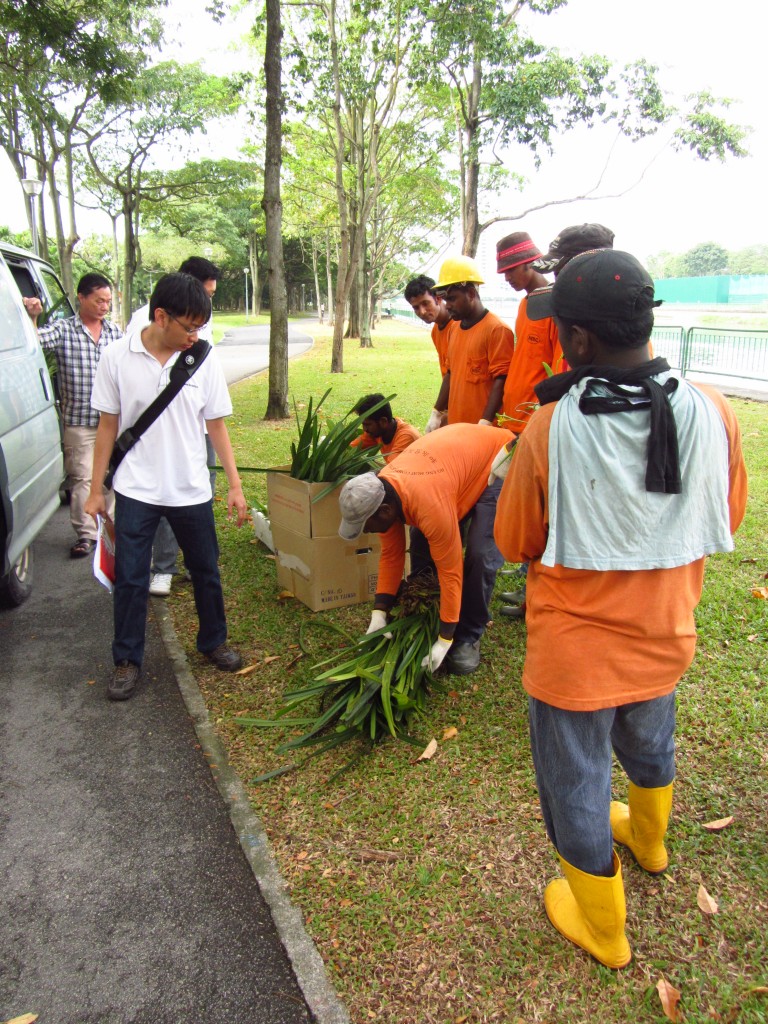 Orchids were delivered on site and distributed to be placed on the respective selected trees.

'Windy' and 'sunny' painted the excellent weather during the planting days, speeding up the process. We were pumped up and in hearty spirits, determined to get the job done. Orchids which required height had to be planted by a worker elevated on a crane lift, while ladders were sufficient for those which rested in the lower branches. At the end of the planting, close to 600 orchids were all nailed and tied down in place.

Nailing away while surrounded by planted orchids.

After two weeks of needed rain and sunshine, NParks staff went by to take a look at the orchids and witnessed a pretty sight - four out of the 12 orchid species were flowering. So, the next time you take a walk along Geylang Park Connector, do  look up and catch a glimpse of the orchids above.

Cymbidium finlaysonianum: Usually found in the wild in the Philippines, Vietnam and Malaysia, this critically endangered species bears a 90-cm-long inflorescence, with individual flowers that measure 4 cm across. The sepals and petals are yellow-green with a brown central band, and the lip is purplish in colour with yellow markings. 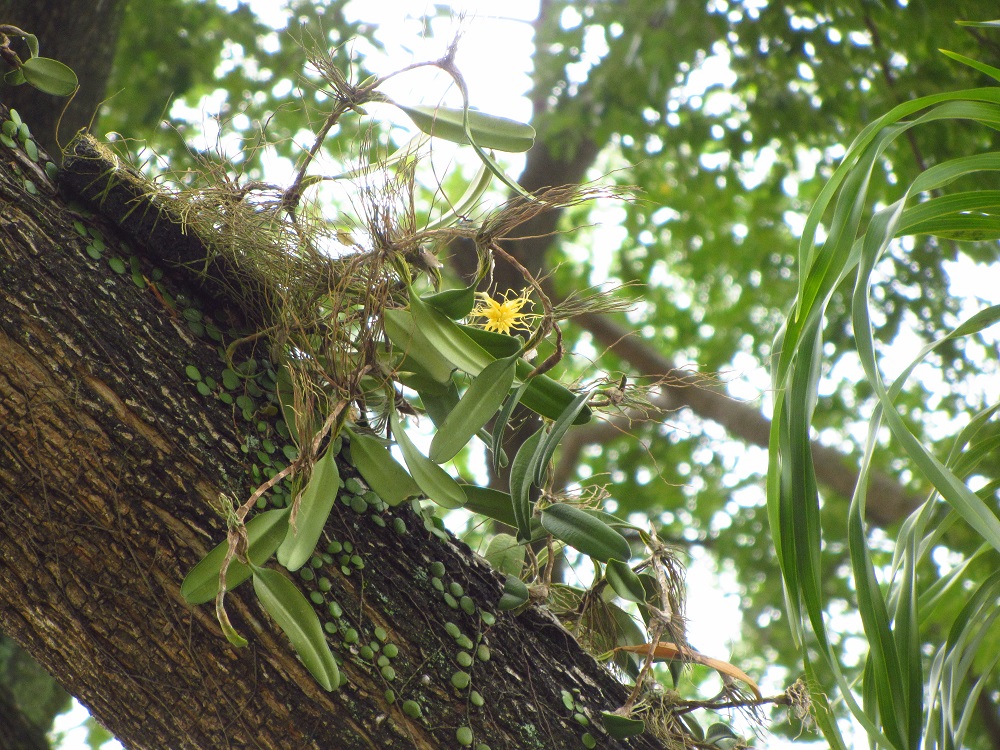 Bulbophyllum medusae (Medusa's Bulbophyllum): Named after Gorgon Medusa of Greek mythology because the long lateral sepals of its flowers resemble the snakes that formed Medusa's hair.

Extinct in Singapore, it bears creamy-yellow flowers; some varieties have purple spots on their floral parts. About 15 flowers are arranged in a fan-shaped whorl, or in a circle, at the tip of the flower stalk. Coelogyne rochusennii: This species was named after J.J. Rochussen, governor-general of the Dutch East Indies in the mid-19th century and has been recently rediscovered in Singapore. The pendulous inflorescences can be as long as 70 cm, and bear about 30 beautiful and scented flowers. It prefers to grow under semi-shade. 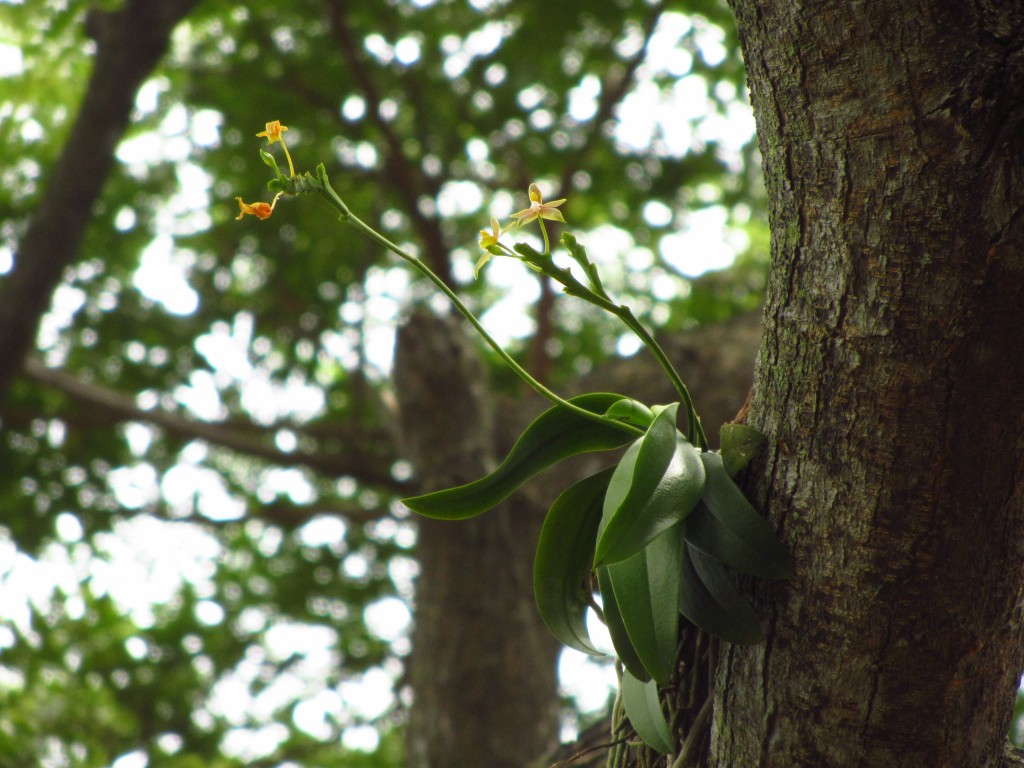 Phalaenopsis cornu-cervi: This attractive species bears many sprays which carry numerous star-shaped, long-lasting flowers which measure 3 cm in diameter.
It grows well under a wide range of conditions and flowers regularly. 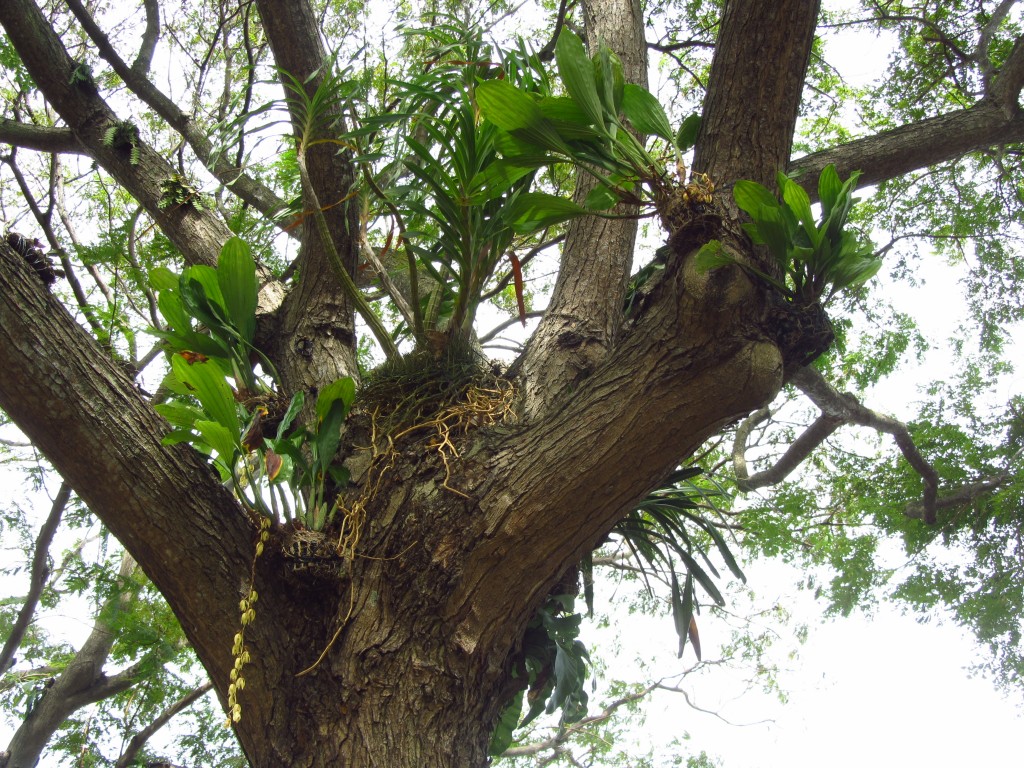 A Rain tree with a variety of orchids planted on it, such as Coelogyne rochusennii, Grammatophyllum speciosum (common name: Tiger Orchid) and Cymbidium finlaysonianum.

Dear "my green space" I would like to buy book "1001 garden plants in singapore" Where can i buy the in singapore? and Have a new edition for the book? For the info i would say thank before. Regard, ilen

Hi ilen, The book "1001 garden plants in Singapore" is available at all major bookstores as well as the retail outlets in Singapore Botanic Gardens - the Library Shop and the Garden Shop. It is not a new edition, as we are in the process of updating it still.