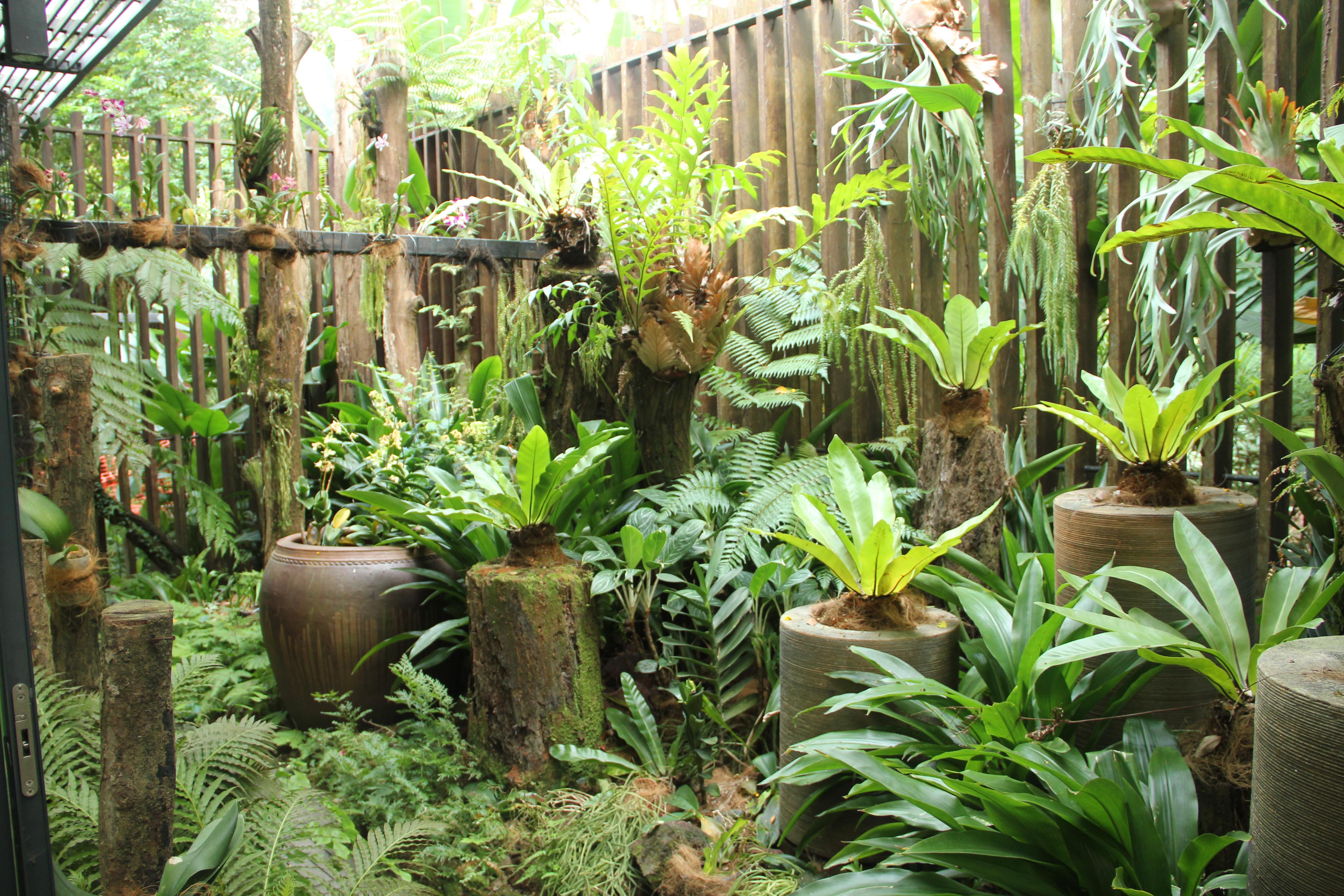 Try mixing different types of ferns in your home display to create a lush soothing landscape.

With their lush green leaves and low maintenance, ferns are popular with people looking for a plant to green up their homes.

Ferns are also suitable for homes because they can survive in shaded areas. However, they reproduce by releasing spores into the air and so they should be grown in areas which are well-ventilated such as the balcony or corridor area, but not too windy and dry as it will dry up the fronds.

Did you know that ferns also have other uses? They have been used for food, medicine, erosion control, and removal of toxic material from contaminated soils.

The distinctive features of ferns are that they reproduce through spores and have neither seeds nor flowers. Leaves of ferns are often referred to as a frond. New fronds are called crozier or fiddlehead, which is a tight spiral that unrolls as it grows. Ferns can be identified by the spore sacs (packed with spores) on the lower surface of fertile fronds. They grow in long lines, in rounded groups or even extend across the entire surface. 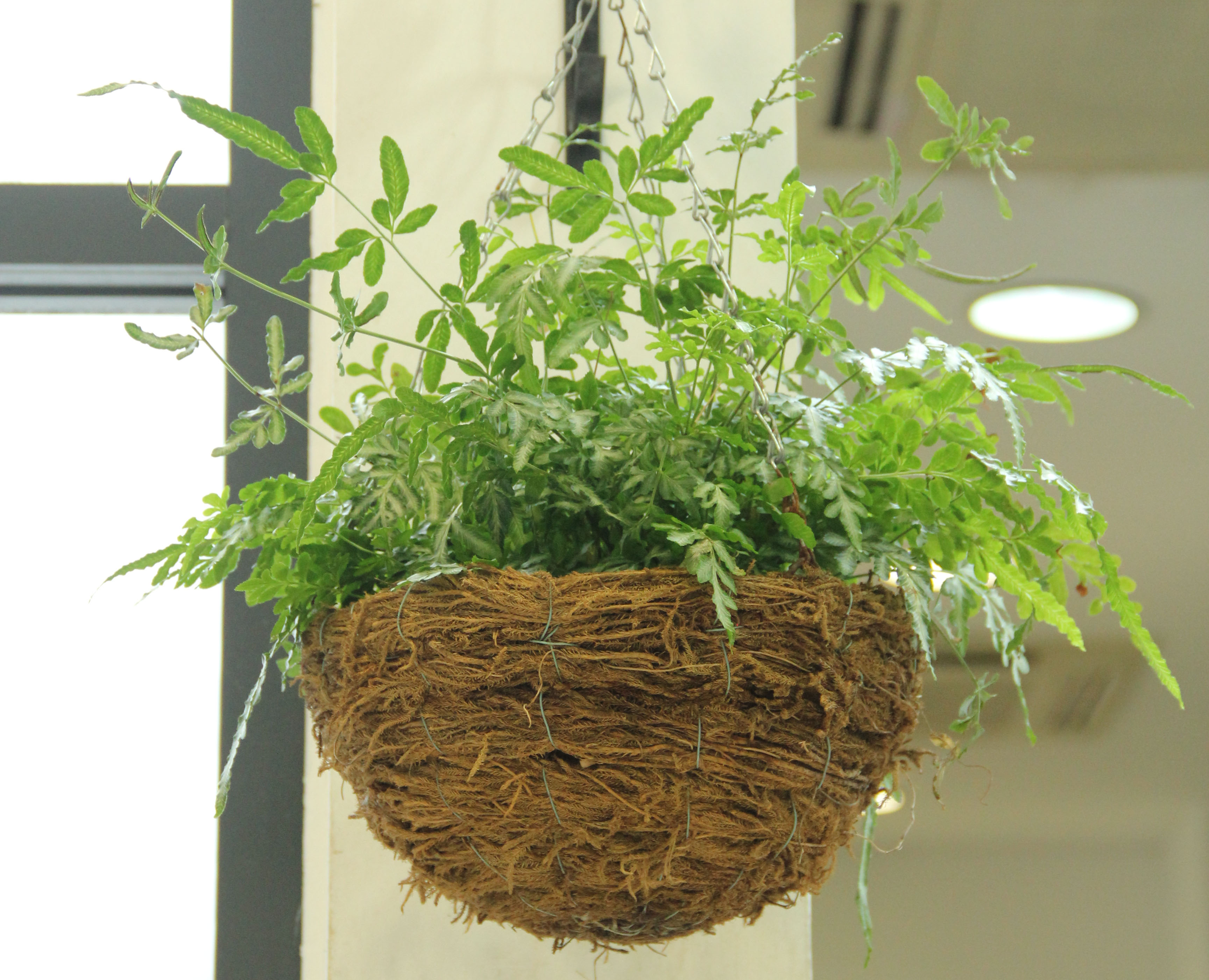 Hang baskets of ferns within your home to add greenery to bare walls and ceilings.

Some ferns can be grown in the ground or in pots, and there are some that grow on branches of trees. These are termed as ‘epiphytic ferns’  they grow on trees for support and they make their own food rather than tapping nutrients from their hosts.

Light:
Depending on the species, most ferns are shade-tolerant and can grow at about 70% shade, while some species grow well in brighter light.

Environment:
A well-ventilated location with high humidity is needed. Humidity can be raised around the ferns by regular misting or spraying of the fronds with water or placing their pots on a tray containing pebbles and a small amount of water. The bottom of the pot should not touch the water in the tray, as otherwise, root rot would develop. In order to prevent mosquito breeding, the water needs to be changed regularly. Ferns are also suitable for terrariums.

Soil:
A soil mix with good drainage and high organic matter content is recommended for ferns.

Watering:
Most indoor ferns die from drowning than from thirst. Allow the soil surface to dry out between watering. However, most ferns will wilt if the soil is completely dried out. Should the soil dry out quickly, it may mean that the fern is getting pot-bound (a situation where the roots have grown so densely that there is no room for further growth) and needs to be re-potted into a larger container. Fronds turning blackat the root tips indicate overwatering. Fertilising: Ferns can be fed with dilute liquid fertiliser of 15–5–15 (15% nitrogen, 5% phosphorous and 15% potassium) at half the manufacturer's recommended strength once a month, as most ferns do not store nutrients well and they grow in soil with good drainage. Reduce the dosage if ferns look 'burnt' or unusual. Alternatively, organic fertilisers could be used.

Propagation:
Ferns can be easily propagated by division.

Trim off all lower and older fronds. Remove the fern from its pot. Using your hands, a pair of secateurs or a thin-blade saw, divide the plant and root ball vertically in halves, thirds or quarters. Put the divided plants in pots just a bit larger than the plant's rootball, and fill spaces with a soil mix that is the same or similar with the one the fern was growing in.

The new plants should not be fertilised until it exhibits new growth (i.e., new fronds). This may take one month or longer.

Ferns can also be propagated by spores.

For more information about these ferns and many other species, please visit NParks Flora & Fauna Web.

Hi Rye, Ferns are a group of plants that do not produce seeds. Instead, they produce very fine, minute spores that are dispersed by wind. These spores are contained in sacs under the fern fronds which split open to release the spores when mature. To collect these spores, a damp tissue may be placed beneath the fronds. However, do note that spores from other fern species already present in the air will also adhere to the damp tissue. It is much easier to purchase these ferns from nurseries than to grow them from spores. A list of nurseries can be found <a href="http://search.insing.com/s/flower%20nurseries%20wholesale" title="here" rel="nofollow">here</a>.

Hi, How can I get these species of ferns?

Hi, How can I get the seeds or seedlings of these ferns