Singapore Botanic Gardens is more than 150 years old. Stashed in its archives are old plans, photographs and maps which document its history and development into the beloved establishment that we enjoy today.

Recent issues of Gardenwise, the magazine of the Gardens, have highlighted some of its early historic features, including one much-loved and another, a nearly-hidden secret.

A new look at a popular feature (adapted from “Uncovering the History of the Bandstand...” by Thereis Choo)

One of the Gardens’ most iconic spots is the area known as “the Bandstand”. It is a favourite of tourists and locals alike as a backdrop for photos. You may be aware that this section of the Gardens is very old; in fact, it was a key feature in the Gardens’ original design (dating to 1860). In its early days, audiences gathered on the lawns to enjoy music performances by military bands. Thinking back to those times, most people probably envision crowds gathered around the iconic structure known as “the Bandstand” that we see today.

However, what most people probably don’t know is that this structure was actually not a part of this early history. The records in the Gardens’ library include a photograph from the 1870s, which shows merely a raised area in the centre of the lawns, instead of the popular wooden structure that we identify with the Bandstand today. 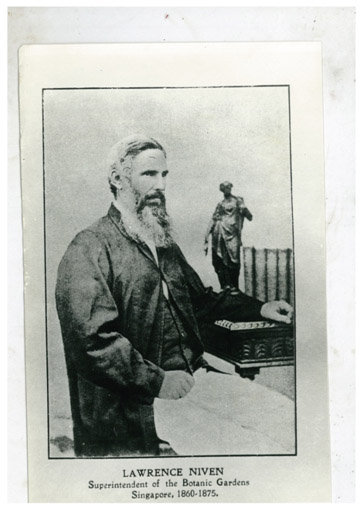 Photograph from the Library’s archives, labelled as “The Bandstand Hill, Singapore Botanic Gardens around 1877”.

By 1925, it was still missing, as documented by a map of the Gardens from that year. It wasn’t until 1930 that the Gardens’ records revealed that the Bandstand was built! So the next time you stroll past the Bandstand, take a moment to appreciate the history of this well-loved spot and how it has changed over time.

A little-known gem is revealed (adapted from “The Dell, a historic feature of the Gardens” by Michele Rodda)

In contrast to the well-known Bandstand, many are probably unaware of the equally historic, but almost-hidden feature known as “the Dell”. Nearly as old as the Bandstand, the Dell dates back to 1882, and was originally designed to cultivate and showcase ferns. Its earliest version featured straight paths and simple mounds to display the ferns, but later, the Dell was modified with concentrically-curved paths and a series of irregular rockeries.

Different types of plants were also added. Despite the changes in its early years, the structure of the Dell has remained pretty much the same since 1927. Today, anyone interested in going “off the beaten path” at the Gardens will be rewarded with shady paths leading through lush vegetation and past interesting water features.

However, should you choose to explore the Dell, you will have to look carefully for the way in – it can be accessed from two almost-hidden paths off of Dell Lane, near Swan Lake, or from Lawn F.

Gardenwise is a bi-annual publication of Singapore Botanic Gardens. For more than 20 years, the magazine has been revealing the work of SBG’s staff and researchers to the public. “Uncovering the history of the Bandstand...” was featured in Volume 39, July 2012, and “The Dell, a historic feature of the Gardens” was included in Volume 40, Feb 2013.

Current and past issues of Gardenwise are available at the Singapore Botanic Gardens retail outlets – the Library Shop and the Garden Shop, and can also be found online.

By Ada Davis
Photos of the Dell by Dr Michele Rodda

Hi Juhari, You can find a Nibong tree at the edge of Eco Lake and there is also a cluster on an island in Swan Lake. We aren't sure which type of mahogany tree you are referring to, but there is a large Senegal Mahogany (<em>Khaya senegalensis</em>) at Lawn B at the Tanglin Core, and a Broad-leafed Majogany (<em>Swietenia macrophylla</em>) near the Nassim Gate roundabout.

Good morning, Like to find out whether nparks has a library and can I asses to look for a book. My home 233 Wolskel Road, once had a pavillion with beautiful exotic orchids and was featured in a book (was told). trying to look and read about it. Can anyone help. Much appreciated. Thanks and have many cool and adventurous weeks ahead. Tina

Hi Tina, You're welcome to visit the Public Reference Library of the Library of Botany and Horticulture at Singapore Botanic Gardens. It's opened Mondays to Fridays from 9am to 5pm. You can also visit the website: <a href="http://http://www.sbg.org.sg/research/herbariumlibrary1.asp" rel="nofollow"></a> for more information.

Is there 'nibong' tree, mahagony tree @ botanical garden here? I ve visited there last Friday. The gardens have improved a lot..