Over the past few months, the Park Connector Network (PCN) team has been busy engaging the local community in two ways:
(i) opening up opportunities for park users to be ‘guided’ along the park connectors; and
(ii) letting the public have a hands-on experience in enhancing our park connectors.

Through these activities, the public not only enjoy themselves but also get to share their feedback or help enhance the PCN.

’PCN Day Out!’ at Ayer Rajah

A brand new elevated bridge over the Ayer Rajah Expressway (AYE) was recently launched and two events were held to introduce the bridge to avid cyclists and residents.

For the longest time, the residents of Pandan Gardens and Teban Gardens were separated from their ’neighbours’ in Clementi and Buona Vista by the AYE. The completion of Singapore’s first elevated park connector has bridged the chasm and now connects Ayer Rajah residents to what used to be an isolated stretch of the Pandan Gardens Park Connector (PC).

In late August, more than 70 PC&Frens, including members of Love Cycling Singapore, test-rode the bridge and most were full of praises:

“A big thank you! I can now cycle to West Coast Park without fearing for my life.”

“Thanks for the effort. This bridge truly bridges people and nearby [park connectors] thus increasing good human traffic, especially bringing more people to the under-utilised Pandan Reservoir and its facilities. Kudos!”

“I saw cyclists speeding very fast on the bridge, especially on the down ramps. With the popularity of the bridge and with increasing usage by cyclists, runners and pedestrians, lane and speed discipline will be increasingly important.”

“[Please have] more painted signage on the PCN, especially at turning points and junctions. This would help to guide people who are new to the route…Sometimes [new visitors] get confused when the PC comes to an end and they don't know where it connects to.” 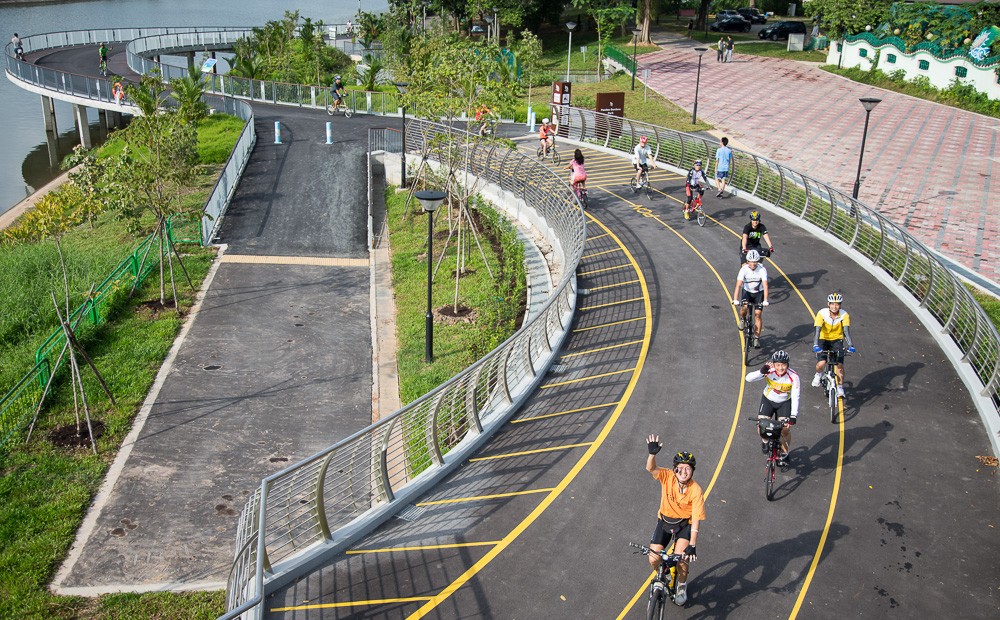 The attractive wave-like design and the fact that it allowed riders to safely cross the AYE made the elevated track a hit with the cyclists.

The very next day, over 500 Ayer Rajah residents celebrated the new linkage by taking a walk along Ulu Pandan PC before traversing the newly constructed elevated park connector, passing Pandan Gardens PC and finishing their exercise at Ayer Rajah Community Centre. The event, graced by Grassroots Advisor and MP for West Coast GRC, Ms Foo Mee Har, was well received, with many of the residents looking forward to jog or ride seamlessly from the Pandan Gardens area to Clementi and vice-versa.

As this is PCN’s first cyclist-friendly bridge, do visit this elevated park connector and share with us your feedback at NPARKS_PCN_friends@nparks.gov.sg.

Getting hands-on along the PCN
On a sunny June morning, six Hewlett Packett (HP) Alumni & Friends, 13 students from Temasek Polytechnic (TP) Adventure Club and nine members of Tampines Cycling Club, together with NParks staff, arrived at Bedok Reservoir Park, all geared up for the paving of two cement footpaths near Bedok North Road.

This was one of two collaborations with HP Alumni & Friends, and it was a unique and meaningful project to facilitate connectivity to various parks within the Eastern Coastal Loop. HP Alumni & Friends have raised some $4,000 via the Garden City Fund to help cover the cost of the project.

Han Jok Kwang, President of HP Alumni explained why this stretch was chosen for the project, “As regular cyclists, we felt that it is important to make this stretch safer, especially when it rains and the place gets muddy [in the process]. This will be good for both cyclists and pedestrians.”

Desmond Lim, President of TP Adventure Club reflected, “At the end of the day, [even though we were ] dirty with cement paste and the sweat from all the hard work, we felt that it was worth it. As the saying goes, 'A small act of kindness goes a long way.’”

The effort expanded also made Desmond and his team appreciate the work done by construction workers even more, “We learnt that [it] is truly not an easy task filling only a small part of the pavement with cement, and this in turn made us realise how fortunate we are to not have to build roads ourselves, and also how much the construction workers ought to be appreciated for their hard work.”

The term ‘gotong royong’, or Malay for communal self-help, summed up the efforts to complete the two footpaths within the morning. A wheelbarrow broke down and many participants chipped in to form a bucket line to pass the cement to the team filling in the paths. All in all, it was a memorable project that brought together the community. A completed portion of the footpath drying in the sun.

The PCN team looks forward to work with anyone willing to contribute, so do drop us a note at NPARKS_PCN_friends@nparks.gov.sg.

HP Alumni and Friends
Back in May 2012, HP Alumni members and avid users of the park connectors – Mina Chan and Han Jok Kwang felt their feedback could be followed-up on in reality and met up with NParks to discuss ways to enhance the PCN user experience. This was how the group started raising funds under the Garden City Fund, a registered charity and IPC established by the National Parks Board.

If you would like to partner us and support our City in a Garden greening efforts, contact Garden City Fund at garden_city_fund@nparks.gov.sg.