The Moths That Make Eyes at You! 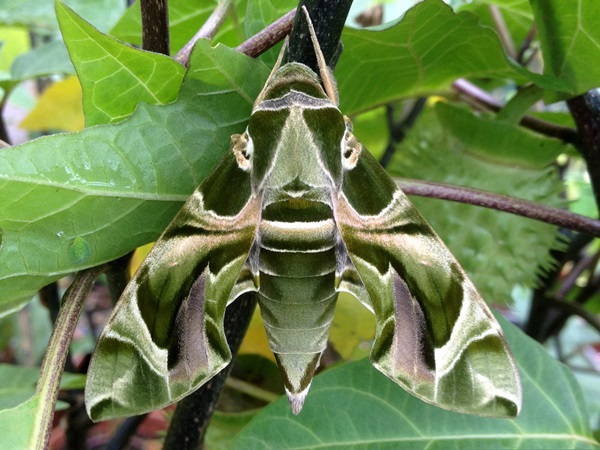 The Oleander Hawk moth, Daphnis nerii is one of the most beautiful adult Sphingids in Singapore. It is also one of the more commonly seen moths in gardens. Its caterpillars feed on plants in the family Apocynaceae, such as Pinwheel Jasmins (Tabernaemontana species), Madagascan Periwinkle (Catheranthus roseus) and Oleander (Nerium oleander).

As dusk falls in Singapore, the sharp-eyed may glimpse the blurred dot-dash flight of a remarkable creature. The aerobatic display belongs to the Hummingbird Hawk moth, Macroglossum stellatarum. Uncannily like its namesake, it is the only day-flying member of a charismatic family that contains some of the fastest flying insects in the world.

Hawk, or sphinx, moths belong to the family Sphingidae, of which around 45 species are resident in Singapore. A number are found only in forest reserves, where their host plants reside, but some are often encountered in parks and gardens, particularly as caterpillars. 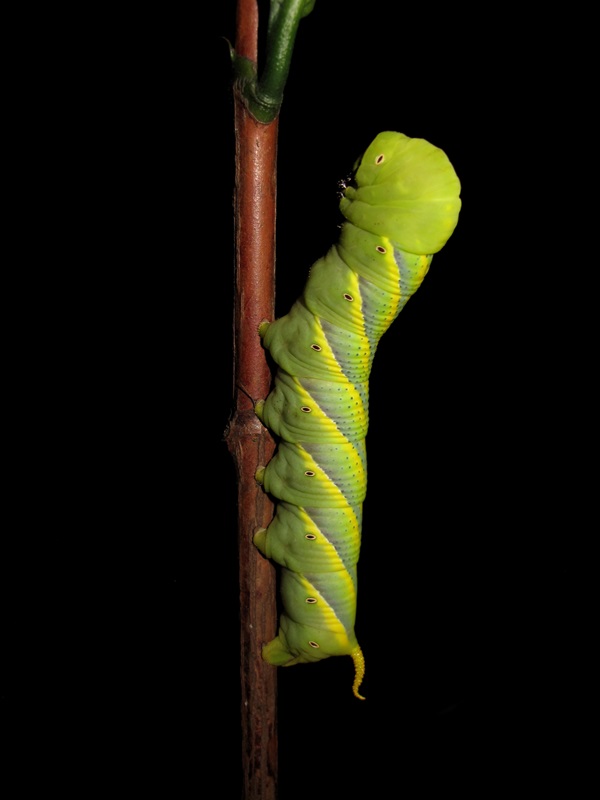 The larvae of the greater Death’s Head Hawk Moth, Acherontia lachesis displays the characteristic sphinx-like posture after which the family is named. Two of the three Acherontia species are found in Singapore, the other is Acherontia styx-medusa. Their larvae are similar and robust, reaching up to 13 cm in length. They have a fairly wide range of host plants, and have often been found on the Clerodendrum and Solanum species in Singapore.

Hawk moth caterpillars are easy to distinguish by their tail like horn, which gives them their common name ‘hornworm’. The name 'sphinx' comes from the larvae’s defensive habit of pulling in their heads and rearing up like the mythical beast. A number of species also appear to have eyes that are accentuated by this posture, giving them a snake-like appearance.

In fact, these are merely spots. Caterpillars can barely see at all, differentiating only between shades of light. The disguise is menacing enough to fool certain birds into putting off a juicy meal at the prospect of becoming a snake’s dinner. Although menacing to birds, the eye spots of some Hawk moth caterpillars may appear rather comical to us.

(Above left) The Dumbo-like caterpillar of Pergesa acteus, is often found feeding on plants in the family Araceae, such as Coco Yams (Colocasia esculenta), Elephant Yams (Amorphophallus species) and Elephant Ears (Alocasia and Calladium species). (Above right) The future’s so bright, I’ve got to wear shades! The caterpillar of Theretra latreillii lucasii, (found feeding on Leea indica var rubra) is a cool customer!

Adversaries
Besides birds (and occasionally irate gardeners), hawk moths have a number of natural predators. Night-flying species have been in an evolutionary war with hungry bats for millennia. A recent study of three species in Borneo revealed a special weapon: in response to bat sonar, they can create ultrasonic signals, seemingly to disrupt their pursuers’ echolocation! Such technology only goes so far, as it has been estimated that only around 6% of Lepidoptera (butterflies & moths) eggs reach maturity.

Certain ants, wasps and spiders count eggs and caterpillars as part of their regular diet. Some foes are more sinister. Parasitoids, particularly Ichneumonid wasps and Tachinid flies, lay their eggs directly into caterpillars, turning them for a short while, into the living dead. 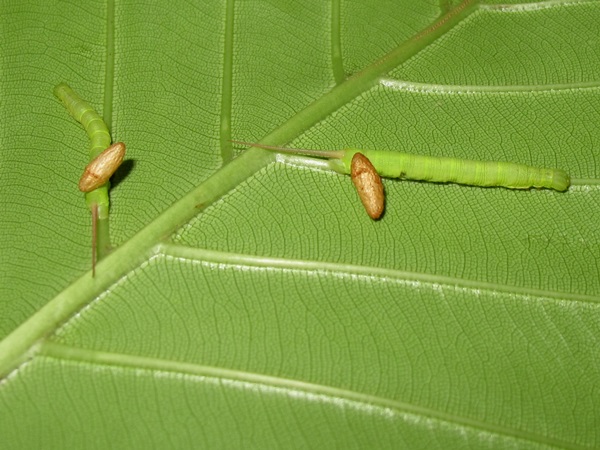 Like all Lepidoptera, the lucky few must shed their skin several times before beginning the change to winged adult. Most will burrow into the soil and excavate a smooth egg-like hollow in which to pupate, but at least one Singapore native weaves a loose cocoon of leaves, as a shelter for its pupa.

Pollination
Those that survive to adulthood may become important pollinators. Pale-coloured, night-scented flowers, such as Hymenocallis are often hawk moth-pollinated and we have them to thank for a continuous supply of papaya fruits. Studies have shown that, although the flowers are also visited by bees, fruit production is dependant on Hawk moths and is much greater in places where there are habitats with host plants for their caterpillars.

There are rogues in most families and the most notable in the Sphingidae are the Death’s Head Hawk moths (Acherontia spp), so called after the skull like mark on their thorax. This gave them a reputation as harbingers of doom in many societies, not helped by the alarming squeak produced when threatened!

In fact, their true skulduggery is directed elsewhere. They have a very short proboscis (tubular mouth), and so rarely feed from flowers. Instead they perform a seemingly suicidal act. A stripy disguise of heavily armoured orange and black scales, an odour that makes worker bees think they are family, and consistent squeaking, supposedly reminiscent of a queen bee’s call, help them slip into hives to steal honey!

A final instar caterpillar of Eupanacra elegantulus sets off in search of one of its last meals. Soon after this it will become much darker in colour and enter a phase of pre-pupation. This species feeds on Aroids (plants in the family Araceae). The toxic calcium oxalate crystals found in the leaves of many members of this family, may make them unpalatable to birds and other large predators.

Two weeks after pupating inside a loose cocoon of dry leaves stitched together with strands of silk, the adult Eupanacra elegantulus eclosed.

So when night falls, remember to keep an eye out for these interesting moths

Photos and text by Craig Williams

Online Resources On Moths
If you want to know more about Sphingidae in Singapore, Leong Tzi Ming’s excellent publications in Nature in Singapore are a good place to start and a poster showing a selection of some native species, including caterpillars and pupae can be found online.

Hi Yvonne Hawkmoth caterpillars are fairly good subjects for rearing. Keeping the caterpillars in a plastic container would work fine, ideally with some ventilation holes poked into the lid. Supply fresh (ie not desiccated) leaves until they reach pupation size and clean out the frass on a regular basis to avoid infection. When they are about to pupate, their bodies will change colour. They will wander around and eventually choose a place to spin a loose shelter amongst leaves. Their bodies then shrink a bit, taking on a kind of Michelin man corrugation and over the course of a day or two, they will change into a pupa. This stage can be a bit upsetting to watch as they don’t look well! It’s a sensitive period, so they should be left alone until the pupa is fully hardened (best is not to touch for a day or two). After that, the pupa can be handled gently but beware that it is fragile and will probably twitch, sometimes quite vigorously! Pupation lasts around 10-14days. The pupa changes colour around a day before the moth is ready to eclose. At this stage it is vital that they adult has something to climb up and hang its wings out to expand. This may be in the form of some twigs or upright newspaper ( a roll around the edge of a tall jar works well) or even a fine mesh like the kind some laundry bags are made of. They are exceptionally fragile when they first come out but once they look like a proper moth, there is a while (sometimes this may even last for a few hours but if they are alarmed it will be much shorter) before they are ready to fly when photographs may be easily taken and they may willingly crawl onto a finger-tip. Beware though that they will eject a few drops of fluid as they prepare for their first flight, something that is sometimes seems to be stimulated by sense of urgency to get away! They vibrate their wings very fast for a while to warm up and then they’ll be off like a rocket.

Dear sir/Mdm I found 4 orleando hawk moth caterpillars in my garden this morning. I have transferred them to 2 plastic containers. Ok to keep them till adulthood?