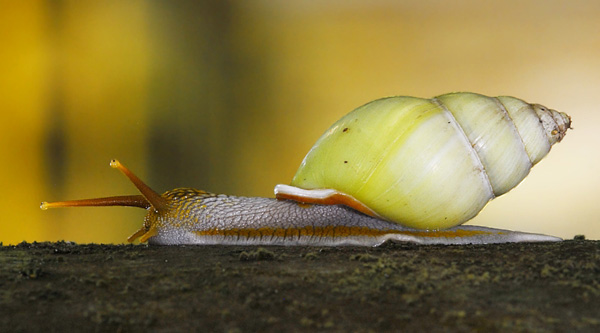 You probably have encountered snails in our parks, gardens, and even in the grass patches around your home. However, did you know that there are also many species of snails that live in our forests and other nature areas?

A denizen of the canopy
The Singapore Green Tree Snail has long been confused with another subspecies Amphidromous atricallosus perakensis which is widely distributed in Peninsular Malaysia. It was only in 2011 that the Singapore Green Tree Snail was recognised as a different subspecies by Mr Tan Siong Kiat, the curator for malacofauna at the Lee Kong Chian Natural History Museum and two of his colleagues. 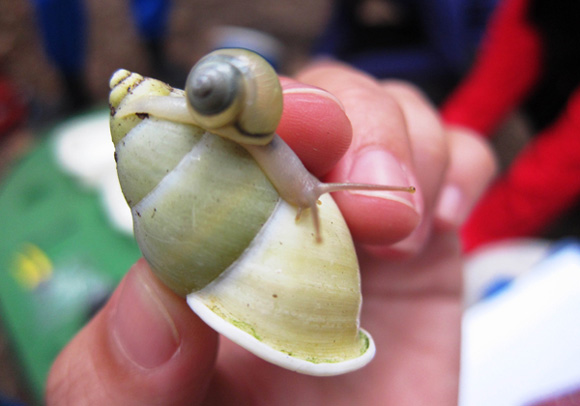 The Singapore Green Tree Snail can be easily recognised by its very distinct jade green shell and pale body. The green shell is very effective in camouflaging and to spot one of them in the forest requires very good eyesight and a tremendous amount of patience! It also prefers to live within the tree canopy and rarely comes down to the ground.

Its diet remains a mystery but many researchers speculate that it may feed mainly on fungi, lichens and detritus. Singapore Green Tree Snails are also known to be hermaphroditic, which means that a single individual possesses both male and female reproductive organs! However, they still need to find another snail to mate.

Threats faced
Over the years, due to rapid urbanisation, loss of habitat and exploitation by shell collectors, the population of the Singapore Green Tree Snail has declined to a point where it is now listed in the Singapore Red Data Book as an endangered species. Its population is now restricted to certain parts of the Central Catchment Nature Reserve and some of the offshore islands. 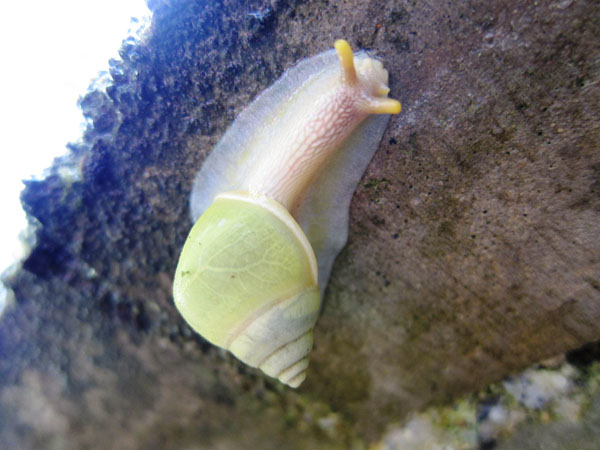 The Singapore Green Tree Snail is an important natural heritage, and we should protect it for our future generations to appreciate. We can all do our part by preserving its natural habitat and refrain from collecting its beautiful shell.

Glossary:
Malacofauna: Invertebrate animal belonging to a group (phylum) known as Mollusca. It refers to animal such as snail, clam, octopus and many more.

Hi Angie, The snail you spotted along Cluny Road is probably not the Singapore Green Tree Snail, Amphidromus atricallosus temasek, but a Brown Tree Snail, Amphidromus inversus. It belongs to the same family as the Singapore Green Tree snail and in Singapore, is considered an endangered species. The Brown Tree Snail is found only within the rainforest of Singapore Botanic Gardens. A few years ago, NParks conducted a 'mark and recapture' survey to study its population size. By marking the snails, researchers could estimate the numbers of snails that exist in the forest.

I came across a Green Tree Snail on 23.11.2015 crossing the tarmac road leading to the Wallace Education Center at Dairy Farm Road. The photos are posted in the NSS fb page.

Is this the same as the snails which were seen climbing the trunk of the tree along Cluny Road near the "Cheng T'ng" tree? I had noticed those snails were marked; someone must have been conducting a research on them. That was some few years ago. Thanks.