The latest issue ofGardenwise magazine features an article written by the Gardens’ director, Dr Nigel P. Taylor, which highlights two incidents involving Gardens’ staff in the course of its long history. In 1875, at the age of only 22 years, James Murton became the Gardens’ first Superintendent.

Two years after taking up the post, in September 1877, Murton became embroiled in a staff dispute that nearly cost him his life. Dr Taylor’s telling of this incident comes from an account published in The Straits Times then.

Apparently, some of Murton’s possessions had been disappearing from his office. Suspecting the Javanese garden workers to be responsible, he withheld their wages to induce them to return his items. This led to an altercation between him and the Javanese foreman, during which the foreman drew a stick to hit Murton, who in turn caught the stick and broke it. This further provoked the foreman to draw his parang and chase Murton around the Gardens’ Monkey House! Murton managed to escape to his residence (Burkill Hall) only to be later confronted by 30 armed workers, led by the foreman. He drew a revolver and fired shots into the air, but the workers didn’t back down and Murton locked himself in the bathroom until the group left.

A warrant was later granted to Murton against the ringleader of the disturbance. No records could be found of what subsequently happened to the Javanese foreman; Murton remained in his post for another three years. 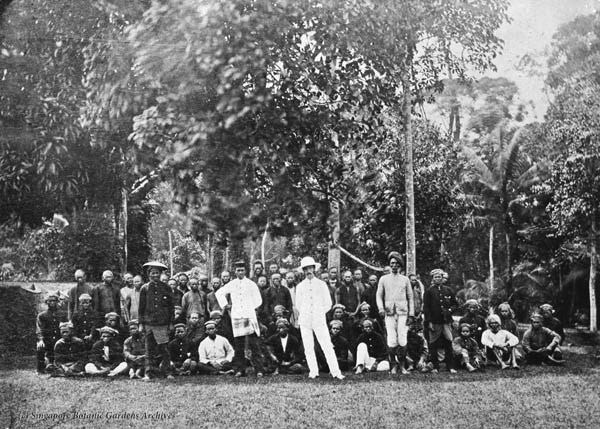 Murton with his staff in 1877. Murton is the centre, and the man to his left is the Javanese foreman.

Following the story of the debacle between Murton and his staff, Dr Taylor goes on to relate how a mysterious amphibian almost ruined an important occasion involving H.M. Burkill (the Gardens’ director from 1957 to 1969) and his staff. The Gardens used to be responsible for providing horticultural displays for official events held outside of the Gardens.

In 1967, the Gardens staff prepared a display at the Istana, which was to be used the following evening as a backdrop for a banquet during a state visit from the Prime Minister of Japan.

As the staff were completing the display, they heard a bullfrog croaking, which Burkill, in his annual report, described as “small in body but very loud in voice.” Afraid that the bullfrog would croak and disrupt the event, the display was taken apart in search of the animal. However, all this work was for naught as the bullfrog was never found! Without any other options, the team rebuilt the display, and the catering staff was instructed to be on guard the following evening, in case the frog made an appearance. Luckily, not a single croak was heard during the event. 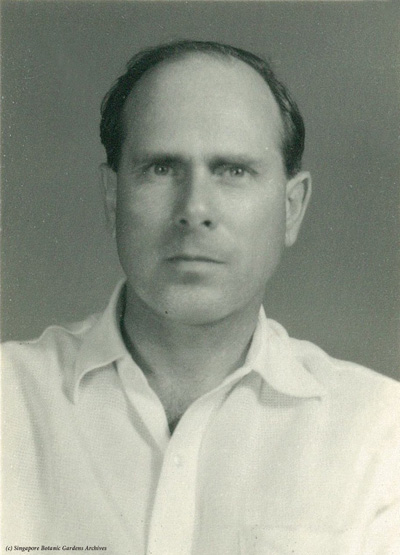 An image of the former director of the Gardens, H.M. Burkill.

This article was adapted from “The challenges of working for the Botanic Gardens”, written by Dr Nigel P. Taylor and featured in Volume 43, August 2014

Current and past issues of Gardenwise are available at the Singapore Botanic Gardens retail outlets – the Library Shop and the Gardens Shops, and can also be found online.