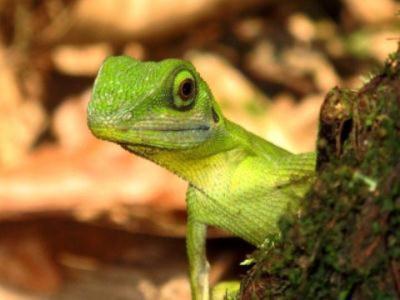 The striking Green Crested Lizard (Bronchocela cristatella) is native to Singapore, and was commonly seen in the past. However, its numbers have declined over time due to the introduction of the more aggressive Changeable Lizard (Calotes versicolor), which was first seen in Singapore in the 1980s. The Changeable Lizard is now abundant in many of the managed parks and gardens, while the Green Crested Lizard can be found mostly in primary and secondary forests only. Learn more about this lizard here.