Nestled within the Seafood Centre at East Coast Park, Blue Pier may have a hipster café-like name, but it is a true blue local seafood restaurant, with a delicious offering of fresh seafood dishes and local delights. I visited the eatery with a group of four friends on a Friday night, and business was brisk. We were pleasantly surprised that a wait staff was stationed at the door who politely invited us into the restaurant. This is a far cry from the “chaos” I often experience in other seafood restaurants.

There are both indoor and outdoor seating options, and we chose the latter to enjoy the experience of eating by the beach. Even before we could order, we were promptly served iced water, which was a welcome respite from the heat of the night.

The menu has a good array of local dishes and seafood choices, ranging from lobsters, crabs and shellfish, as well as barbequed skewers. We decided on the local favourites, ordering the Sweet Potato Leaves fried with garlic, Spiced Prawn Sausage Roll, Braised Seafood with Beancurd in Claypot, Wok Fried Boneless Chicken with Taiwanese “San-Bei” Sauce, and of course, the Signature Singapore Chilli Crab.

It was a busy night at the restaurant, and understandably, the food took a while to be served.

A Feast of Textures

First up was the Sweet Potato Leaves fried with garlic: the vegetables were fresh and flavourful, and most importantly, they were tender. For fans of the sweet potato leaves, you would know that it is not always easy to get tender versions of this vegetable, and it was a great start to dinner, knowing that the leaves were well selected for their texture! 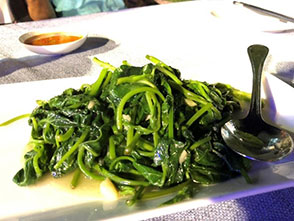 A good start to the meal with tender Sweet Potato Leaves fragrantly fried with garlic.

Next came the dish of the Spiced Prawn Sausage Roll. They too did not disappoint. I particularly liked that the skin was well-fried and crispy. The stuffing did not contain any hints of flour, but were instead full of meat and prawns, meaning that we were getting the real deal of genuine ingredients. 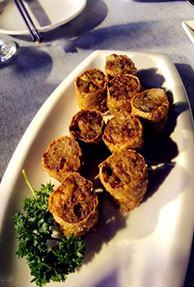 The Spiced Prawn Sausage Rolls were crispy on the outside and juicy on the inside.

Finally, the star dish of the day was served – the Signature Singapore Chilli Crab. It was a large crab, enough to feed us five. First, the gravy was thick with a good kick of spiciness. It was also savoury which I like, rather than some other variants which tend to have a sweeter taste. The crab’s meat was fresh, succulent and sweet, without the delectable gravy overpowering its natural taste. 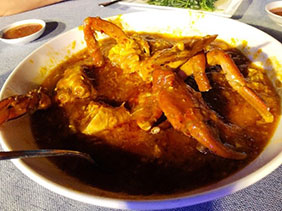 The star Signature Singapore Chili Crab dish of delicious gravy with a fresh, meaty crab did not disappoint.

Arriving at the same time to complete the meal were the Braised Seafood with Beancurd in Claypot and the Wok Fried Boneless Chicken with Taiwanese “San-Bei” Sauce.

The silky-smooth beancurd was served in a claypot choked full of ingredients such as prawns, mushrooms and squid. The tofu was also coated with seaweed, which further enhanced its flavor. As for the chicken dish, I liked that it was fragrant and not overly oily. The large chunks of juicy meat were also well-coated with the tasty “San-Bei” sauce.

(Left) The soft beancurd was served with generous portions of vegetables, mushrooms and prawns while (right) the juicy chunks of chicken were well cooked and coated with tasty “San-Bei” sauce.

My verdict? The dishes were flavorsome, and definitely served in generous portions. It fed five adults adequately, and none of us left the table feeling hungry or dissatisfied. My friends also liked the restaurant for its good food and prompt service.

Being by the beach, we enjoyed the light breeze while seated outdoors, and took in the views of the sea and the occasional airplane landing at the nearby Changi Airport. After our feast, we were also happy to be able to walk off some of the calories along the beach!

I definitely recommend this place for casual family gatherings, or maybe even for your upcoming Chinese New Year reunion dinner!