Raffles Building, opened as Raffles Hall in 1958, is today used as offices for NParks staff. Visitors to this part of the Singapore Botanic Gardens are welcomed by a row of shady Rain Trees.

Regular visitors of the Singapore Botanic Gardens are likely to be familiar with its popular sights and have admired its many beautiful trees. But not many may have ventured to the area around Raffles Building to explore its surroundings.

Students of the National University of Singapore in the mid-1980s may remember this structure as Raffles Hall, a living quarters on the periphery of the campus. This hostel, which was officially opened in 1958, has since been relocated to Kent Ridge. In the mid-1990s, the building served as the School of Arts of the National Institute of Education. Currently, staff of the National Parks Board occupy the building, enjoying its quaint architecture and shady surroundings as part of their office space.

While Raffles Building is not open to general visitors to the Gardens, everyone can explore the green area around it. We picked five impressive trees for you to discover while you are there. 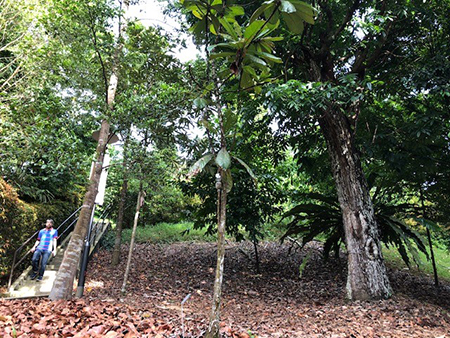 The timber of the Broad-leaf Mahogany (extreme right) is used to make high-end furniture.

Start your journey of discovery by going to the back of Raffles Building. Facing the building, on its extreme left is a small slip road that slopes up. As you go up the incline, there is a flight of stairs ahead that leads to the Healing Garden.

Found at the right of the foot of the stairs is a Broad-leafed Mahogany, a deciduous tree that can grow to heights of around 50 m. It produces small, yellow-green flowers, blossoming on the crown. When the flowers fall and litter the ground under the tree, they emit a honey-like scent.

When the tree sheds its leaves, young shoots with pink leaves appear. Its timber is used for high-end furniture and cabinet work across the world. In Singapore, its seeds were once collected as folk medicine, said to treat diabetes and high-blood pressure. These seeds can grow to about 9 cm in length, but only their bottom third comprises the embryo. The top two-thirds is the wing, enabling the seed to ‘rotate’ like a helicopter blade when falling.

According to researchers, the tree was introduced to Singapore in 1876, and was a popular roadside tree. Today, you can admire avenues of the Mahogany along Bukit Timah Road and Dunearn Road. 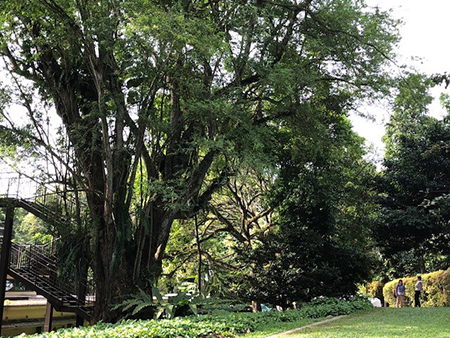 The Madras Thorn has a broad and relatively low crown, with branches that grow fairly low on the trunk.

Turn around to face the back of Raffles Building. To your left, just behind the building, you can find the Madras Thorn. Considered a medium-sized evergreen tree, it can grow to about 15 m in height. It has a broad and relatively low crown, the result of branches that grow fairly low on the trunk.

Native to Tropical America, it is believed that the tree was introduced to this region by the Spanish and Portuguese. The Madras Thorn produces white flowers, with conspicuous stamens, while its fruits are coiled pods that split to expose a thick white pulp surrounded by shiny black seeds. Its wood can be used in construction or as firewood.

In the 1960s, this was a popular tree in Singapore but its numbers were reduced due to infestations by caterpillars subsequently. You can find a few impressive Madras Thorn in Fort Canning Park. Like the White Gutta, researchers believe that this tree was planted before or around the time Raffles Building was constructed. 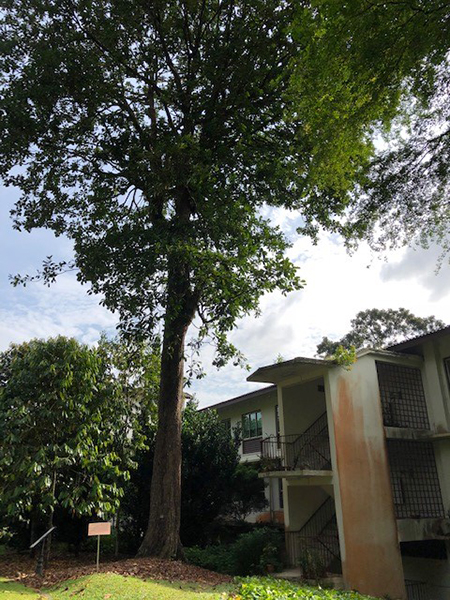 The large White Gutta growing behind Raffles Building is a Heritage Tree and believed to be more than 60 years old.

A few metres on the left is a large tree of over 30 m in height. This is the White Gutta, easily identified growing behind Raffles Building. It has greyish-brown bark with irregular fissured patterns and distinctive coloured leaves – when they fall to the ground, they are reddish brown above and greyish brown above. These leaves often exceed 20 cm in length.

The tree produces small brown seeds – described as shiny brown on the rounded end and a more dull brown on the flatter side, almost like chocolate-covered candies. In the past, its white sap was used to insulate cable and telegraph wires, leading to a boom in its production about 100 years ago. Demand has since fallen with the availability of cheaper alternatives. However, dentists still use products which contain latex derived from the tree for root canal fillings.

This Heritage Tree has a girth of about 1.5 m and is found on the site of the former Economic Gardens. It is believed that a plantation was created here in the late 1890s, in response to the loss of wild trees that were exploited for their latex. There are a few large White Guttas found in other parts of the Singapore Botanic Gardens, notably one just outside the Evolution Garden. 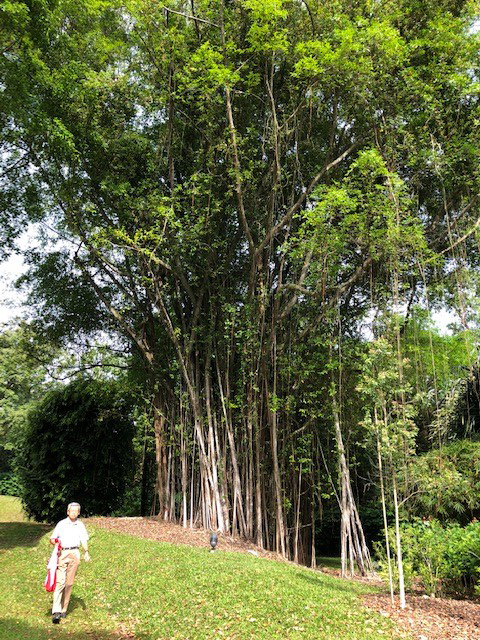 The Malayan Banyan, found next to the entrance of the Healing Garden, is characterised by its many dangling aerial roots.

Now, proceed to the front of the building. As you walk along the road, you will see a row of stately and shady Rain Trees. Continue past the food hall to the t-junction where the road leads out of the compound. Here you cannot miss a large tree characterised by its many dangling aerial roots that become pillar-like trunks after making contact with the ground.

The Malayan Banyan is a strangling fig, beginning its life on the branch of another tree. Upon germination, the seedling produces a small root that follows the trunk of the host tree to the ground. Once it gets a reliable source of water and minerals through its roots, the banyan may grow quickly and in the process, outgrow its host.

Some cultures believe that the young aerial roots of this species have medicinal properties – relieving wounds, bruises and even toothaches! In Singapore, you may find altars placed among the prop roots of the banyan, while in the past, some trees were seen adorned with sashes. This is because some people believe the banyan has some spiritual significance. 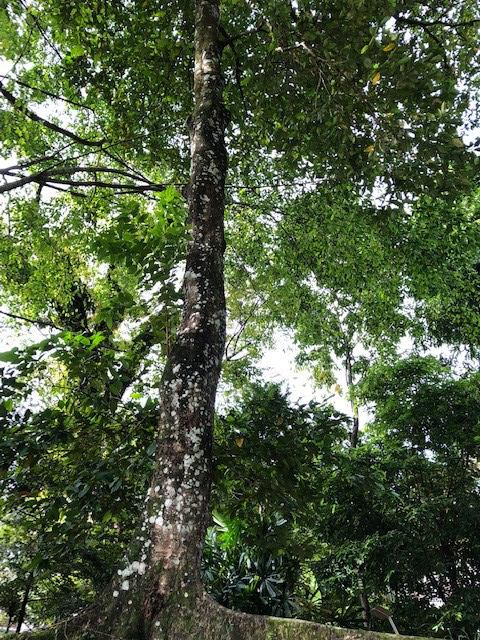 The Salam is a native tree that typically flowers in June to September.

Just across from the Banyan, a few steps up the incline is the Salam tree. A medium-sized tree that can grow up to 25 m in height, it has a cylindrical, open crown. Its leaves are oblong-shaped and dull green in colour, while it bears faintly fragrant white flowers with pinkish cups (the part where the sepals join together) that turn reddish as the flowers age.

A native tree, it typically flowers in June to September. It bears round-shaped fruit about 7 to 10 mm wide that ripen from red to a dark purple. These fruits can stain vehicles parked under the tree, but are enjoyed by many birds. Oils from its leaves have been used to flavour rice while some cultures believe the bark extract has medicinal uses to treat stomach aches.

More to Discover
You are welcome to explore the Healing Garden; its entrance lies to the right of the Malayan Banyan. Here, you can find over 400 varieties of plants used medicinally. Spread over 2.5 hectares, the garden is laid out thematically according to the parts of our bodies such as head, respiratory and reproductive systems.

Text and photos by Felix Siew