Did you know that fraudulence is a necessity for certain animals and plants to survive in the natural world?

Over time, plants and animals have evolved to have biological adaptations so as to survive in nature. Deception is often used as a strategy in their fight to survive — to find food or avoid being eaten. This deceit goes beyond sight, and can manifest itself in terms of sound, smell and even behavior! Such adaptations are important for the eco-system as it increases an organism’s chances of survival, by hiding them from their predators or prey.

The two main forms of deceit are camouflage and mimicry. Camouflage is the visual technique of blending into the environment. Mimicry is a form of adaption that goes one step further by imitating one or more traits from another object or organism to obtain some benefit.

Read on to learn about 12 plants and animals found in Singapore that employ such duplicitous strategies. Deceit form: Camouflage
With dorsal grey to brown skin that is textured to look like the dried leaves, the Malayan Horned Frog (Megophrys nasuta) is difficult to spot on forest floors. This native amphibian also has horn-like skin flaps present above its eyes, adding to the “disbe-leaf”. This allows the voracious predator to ambush and feed on unsuspecting prey such as large insects, snails and other frogs. 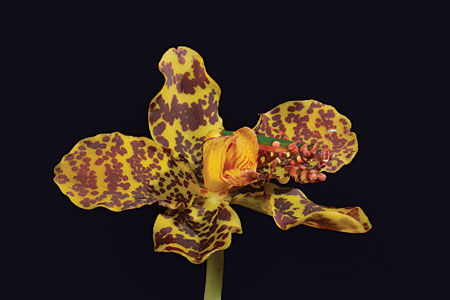 Deceit form: Camouflage
Disruptive colouration is a type of camouflage where specific patterns and colours are used to break up the outline of the animal to allow it to blend into the environment. The spotted body of the Banded Flower Mantis (Theopropus elegans) allows it to camouflage seamlessly with the Tiger Orchid (Grammatophyllum speciosum). In this case, the mantis makes use of the orchid to attract unsuspecting prey and feeds on the insects that come to pollinate the flower. 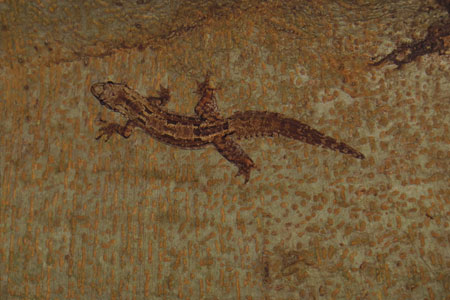 Deceit form: Camouflage
Compared to other geckos, the Frilly Gecko (Cosymbotes craspedotus) is at a disadvantage when it comes to speed and agility. The skin frills on the side of its body make it harder for the native amphibian to glide efficiently, but they serve an important self-preservation purpose! They help obliterate its shadows, and along with its brownish-grey mottled skin, this Critically Endangered gecko can easily blend into the surroundings!

Deceit form: Camouflage
The Saturn Butterfly (Zeuxidia amethystus amethytus) can often be found feeding on overripe fallen fruits on the forest floor. In order to enjoy an undisturbed feast and hide from its predators, the underside wings of the butterfly look exactly like a dead leaf! The leaf-like appearance with cryptic markings on the underside of its wings allow the butterfly to camouflage very well amongst dead leaves and twigs. 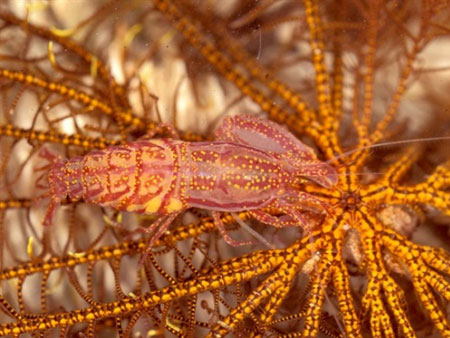 Deceit form: Camouflage
If you ever happen to come across a feather star, chances are that there are Crinoid Shrimps  hiding somewhere in there as well, such as this Crinoid Shrimp Snapping Shrimp (Synalpheus stimpsoni)! These shrimps employ disruptive colouring as a tactic by matching the distinctive colour and pattern to that of its host, allowing them to camouflage remarkably well on the feather star. The symbiotic relationship between these marine animals is well known, and its presence is often an indicator of the reef’s health. Did you know this shrimp is native to Singapore as well?

Deceit form: Camouflage
With a brown body that is heavily mottled with black, this slow-moving Sunda Leaf Fish (Nandus nebulosus) is often mistaken as a dead leaf in the water. The cryptic colouration on its laterally compressed, oval-shaped body allows it to sneak up on small fishes and prawns upon which it preys in shaded forest streams. The freshwater animal is Critically Endangered and native to Singapore. 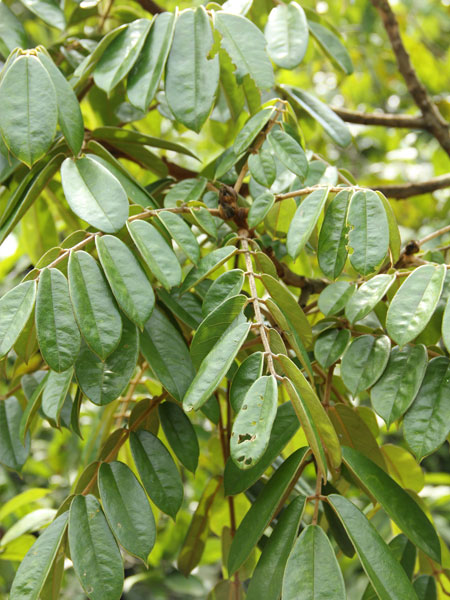 Deceit form: Mimicry
Who said only animals were capable of mimicry? The Saga Hutan (Ormosia sumatrana (Miq.) Prain) produces oblong, greyish-black seeded pods that contain bright red seeds. These inedible red seeds are thought to be dispersed by birds who mistake them for juicy red fruits! 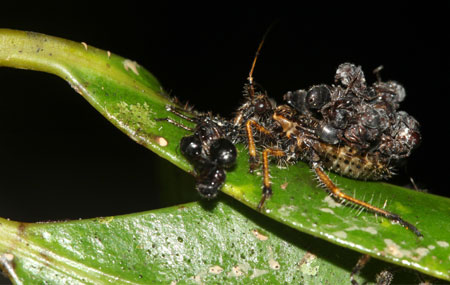 Deceit form: Mimicry
The Ant-snatching assassin bug (Acanthaspis petax) uses a more macabre mimicry tactic to survive. In order to camouflage itself and mask its natural scent, it sticks the corpses of its devoured preys (ants) onto its back. This disguise also allows the assassin bug to infiltrate ant colonies while posing as one of their own! Talk about smart mimicry! 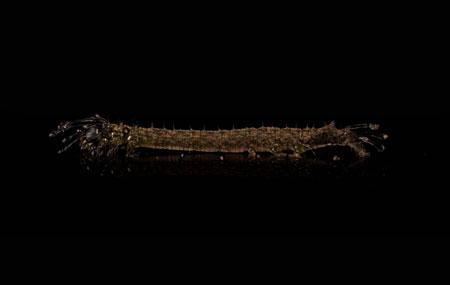 Deceit form: Mimicry
This Ant-mimicking Caterpillar of this Semi-looper Moth (Homodes bracteigutta) is the living representation of the phrase: Keep your friends close and your enemies closer. The Weaver ant (Oecophylla smaragdina) is capable of a painful bite owing to its acidic secretions, so much so that even predators avoid them. However, this caterpillar has learnt to take advantage of the ants’ reputation by evolving to look just like them! The fiery red ants are too busy to notice the difference, and the mimic caterpillar can comfortably feast while enjoying high-security protection against would-be predators, provided by the busy ants! Deceit form: Mimicry
The native Slender Pitcher Plant (Nepenthes gracilis Korth.) deceives with smell, mimicking flowers biochemically by producing a sweet-smelling liquid at the bottom of its ‘cup’ structure. Fooled by the sweet nectar scent, the insect prey falls in and is unable to climb out of the slippery inner walls of the plant. Enzymes secreted by a special gland quickly digest the fallen insect and the nutrients are absorbed by the plant’s walls. 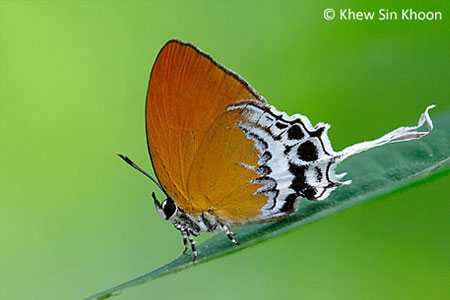 Deceit form: Mimicry
The Branded Imperial (Eooxylides tharis distanti) is the best ‘bluff’ when it comes to visual mimicry and deceptive behaviour! It has a ‘fake head’ at its hindwing to fool predators. The prominent spots and tails distract predators and trick them into attacking the less vital parts of the butterfly, giving it a chance to escape and survive. The white filamentous tails of the butterfly are highlighted as it flutters in the wind in contrast to its bright orange body. This makes it more obvious and calls attention to the wrong side of its body to the would-be predator. Deceit form: Mimicry
You may know the Asian Koel (Eudynamys scolopacea) for its call, but a lesser known fact is that it is excellent at egg mimicry and is a brood parasite. This means it will lay its eggs in an unattended nest of another bird species and rely on the host to raise its young until the young Koel is ready to fly. In Singapore, the host is predominantly the House Crow (Corvus splendens).

In addition, the Koel brood paratism reduces the crow’s reproduction success and keeps its population in check. When the Asian Koel deposits its eggs in the unattended nest of a House Crow, it sometimes removes one of the host’s eggs in the process. And when the Koel chick hatches first, it may force the host’s eggs or chicks out of the nest!

Learning more
If you are interested to learn more about the fascinating adaptations of our local flora and fauna, discover more information using Flora&FaunaWeb! The user-friendly portal allows you to search for information on flora and fauna from this region, and that can be found in Singapore. It has detailed information, accompanied with pictures, for all who are interested in plants and animals.

Prefer a more hands-on approach? Join our Citizen Science programmes or our nationwide Biodiversity Week activities! These projects are where community citizen scientists help to collect data during research endeavours. The data derived from these projects is highly important, helping inform decision makers about our biodiversity and helping to formulate conservation strategies. Let us all play a part in protecting our local biodiversity together!

Lynn Chan is a Third Year Mass Communications student of Nanyang Technological University (NTU). As part of her school’s professional internship programme, she is working in NPark’s Communications and Community Engagement department for six months. During this time, she created posts for NParks' social media platforms, wrote articles for My Green Space, assisted with media queries and was involved in the preparation of media materials for events such as the Festival at the Fort and the opening of Jurong Lake Gardens.