Munias are small (10 to 12 cm) finch-like birds from the family Estrildidae. Around 20 species can be found in Southeast Asia. They inhabit open country and forest edges, and are particularly conspicuous in extensive areas of grassland.

Munias are generally found in small flocks. However  they congregate in large flocks when roosting and when large areas of grassland are seeding. These birds have predominantly brown plumage and a distinctive robust bill adapted to cracking the hard outer shells of seeds.

They build spherical nests with a side entrance. For protection, the nests are well-hidden amongst dense vegetation. There are five species of munias regularly seen in our parks and nature reserves. Learn more about these commonly seen munia species in Singapore. 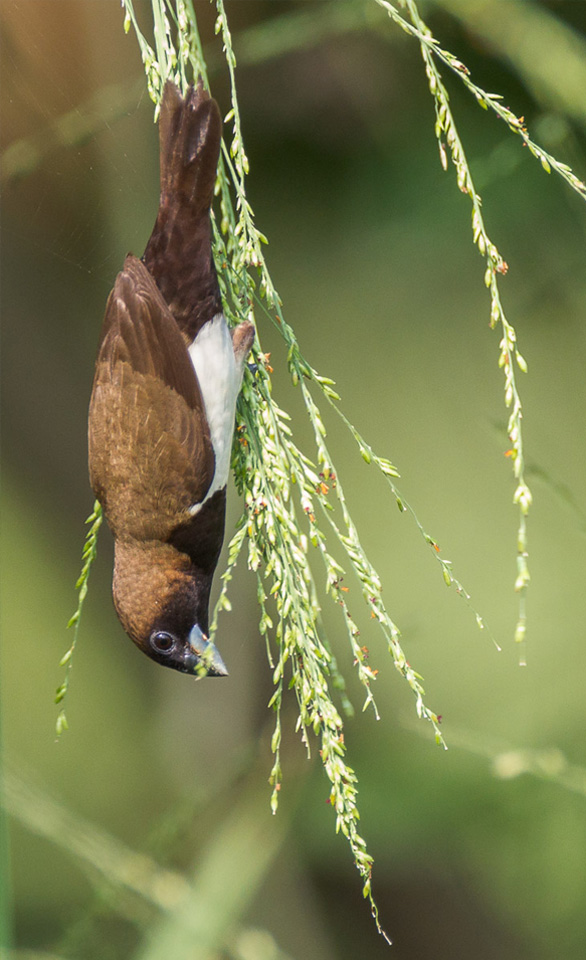 Originally found in South Sumatra, Java, Bali and Lombok, the Javan Munia (Lonchura leucogastroides) was introduced to Singapore in the 1920s. It is now an uncommon resident throughout the island.

It has a black face and breast, with a white belly and flanks. It prefers more wooded environments compared to other munias. You may be able to spot it at Sungei Buloh Wetland Reserve or Kranji Marshes. 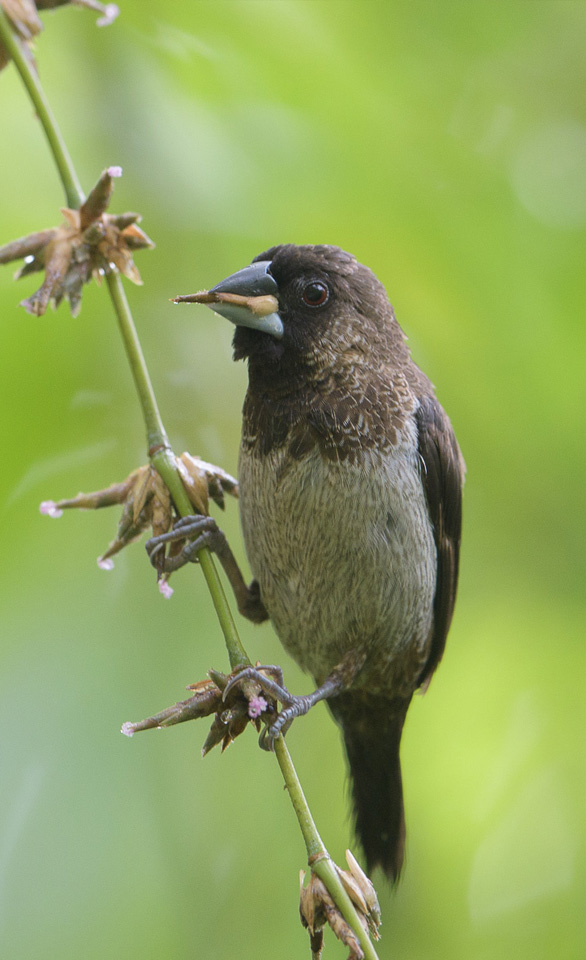 The White-rumped Munia (Lonchura striata) is the most rarely encountered of the five munia species showcased here. Like the Javan Munia, it prefers wooded areas and is generally not found in open country habitats.

This species looks similar to the Javan Munia but is best distinguished by a prominent white rump and white streaking on its upper parts, throat and breast. It usually forages in small flocks in forest clearings and may be observed at Pulau Ubin and the Singapore Botanic Gardens.

The Scaly-breasted Munia (Lonchura punctulata), or Nutmeg Mannikin, is the most commonly encountered munia in Singapore. Its name comes from the scale-like markings on its breast and belly.

The adult is brown with a distinctive chestnut head, back and wings, that contrast with its white breast and flanks strongly scalloped with black. The juvenile is uniformly brown, and lacks the chestnut head and underpart scaling present in adults.

Highly gregarious, it forages in flocks of as many as 100 birds, sometimes with other munia species. It is common and widespread throughout Singapore, and is regularly recorded in urban parks.

The Chestnut Munia (Lonchura atricapilla), also known as the Black-headed Munia, is a uncommon resident found in open country habitats.

The adult’s head and throat are entirely black, contrasting strongly with its bright rufous  body, wings and tail. The juveniles of this species are very difficult to distinguish from the Scaly-breasted Munia as they are uniformly brown as well.

Chestnut Munias often travel in pairs or small flocks and may be observed at Kranji Marshes, Gardens by the Bay and Coney Island. 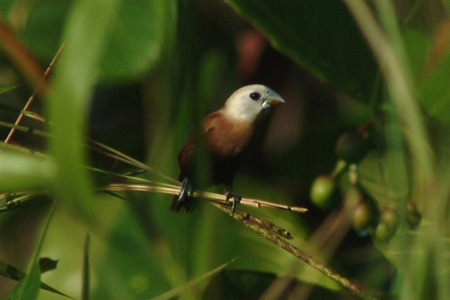 The White-headed Munia (Lonchura maja) is another uncommon munia found in open country habitats. Adults have a distinctive white head and throat that contrasts with a chocolate brown body. They also have a black patch on the belly.

This species is highly gregarious and often forms mixed foraging flocks with other munia species in the grasslands. You may be able to spot this species at Lorong Halus Wetlands, Kranji Marshes as well as grasslands around Tuas and Changi.

For more information
Love to bird-watch, or want to learn more on identifying garden birds? Join us for Garden Bird Watch, that runs twice a year as part of the NParks Community in Nature Biodiversity Watch series.