The appeal of Tillandsia, or air plants, is easy to see – they require minimal care, can survive well in harsh environments, and make unique and exotic accessories for any indoor space. But what makes these plants so special?

Air plants get their name from how they do not require soil to grow. These plants get their water and other nutrients through their leaves instead of their roots. Found naturally in dense tropical climates in the Neotropical region, Tillandsia has adapted to cope with the fierce competition for light, water and space by taking in water through their leaves, while their roots serve as an anchor for latching onto tree trunks and branches.

They are especially popular among plant owners with busy schedules, and for parents looking for a resistant plant that their kids can learn to take care of. Here are eight common air plants that you can easily grow at home and in the office. 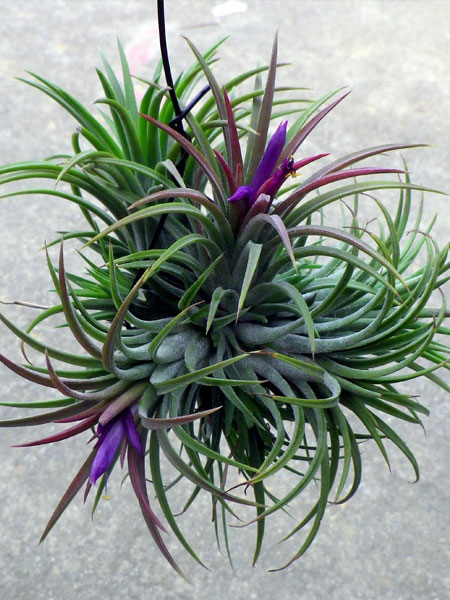 Affectionately known as the Blushing Bride, this small air plant features layers on layers of narrow silvery leaves that curl outwards like a blooming flower. When the plant flowers, the innermost leaves turn bright red, while its flower protrudes from the centre of the rosette, ranging from a deep red to violet in colour.

TheTillandsia ionantha is a variable species with several recognised cultivars, and its cultivars are highly sought after by plant enthusiasts. It thrives in indirect sunlight and only requires misting every three to four days. 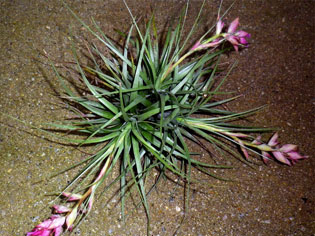 This air plant is popular among new plant owners as it can survive in a variety of harsh environments and is still easy to cultivate. It grows in rosettes of greyish-green leaves, producing blue to purple flowers. While its flowers last only a day, the plant’s leaves will remain green throughout the year.

This plant grows best indoors, so be creative with how you want to display it. Remember that air plants take in water through their leaves and not their roots, so a good way to ensure it stays healthy is to soak the entire plant in water for 30 minutes once or twice a week. Most importantly, gently shake off any excess water after soaking to avoid leaf rot. Avoid soaking the flowers as water may cause the flowers to dissolve. 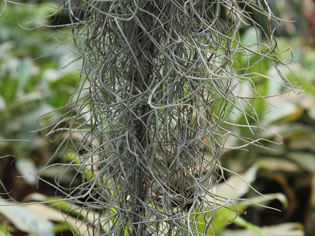 Commonly known as Spanish Moss, this air plant is unusual compared to other common Tillandsia varieties because it does not have roots. Able to reach lengths of 15 to 25 m, it instead produces long, slender stems that grow clusters of thin curly leaves giving the plant a chain-like appearance.

In the wild, it is commonly found hanging from the branches of oak trees. Indoors, it makes a beautiful decoration for any wall and is extremely easy to maintain as well. Simply hang it in partial shade and mist it regularly to keep it thriving. 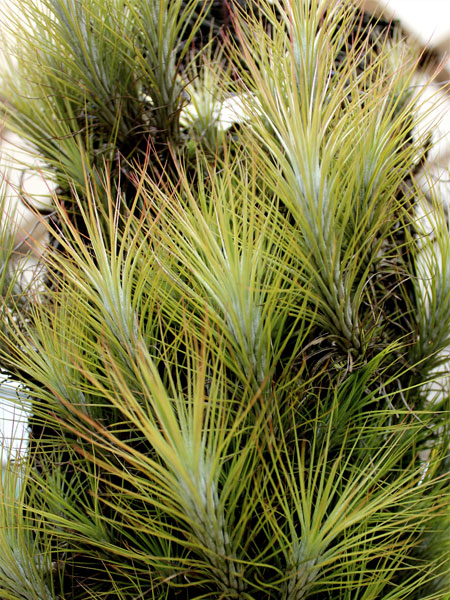 Tillandsia funckiana is an easy-to-maintain plant suitable for novice air plant owners. It is a small plant that consists of silvery green needle-like leaves growing along a stem. While often sold as a single graceful stem, it looks equally remarkable when grown long enough to develop into a clump.

When in bloom, each Tillandsia funckiana stem produces a single tubular red flower. Keep this air plant well-ventilated and mist it around three times a week. Soaking this plant is not recommended as water can become easily trapped between its leaves. However, if you decide to give your Tillandsia funckiana the occasional soak, make sure that it dries completely after. 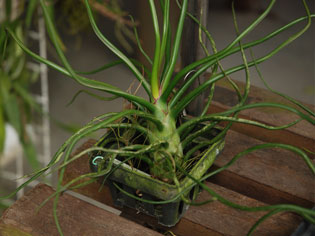 This plant has leaf sheaths that are spirally arranged to form a pseudo bulb. These leaf sheaths extend into smooth, dark green tendrils that appear to be “waving”. When flowering, it produces a spike with red bracts and purple petals, with protruding stamens.

The Tillandsia bulbosa is very suitable for the office and home as it prefers low-light conditions and indirect sunlight. Avoid soaking this plant as the compact leaf sheaths trap water easily. It is recommended that you mist it two to three times a week instead. 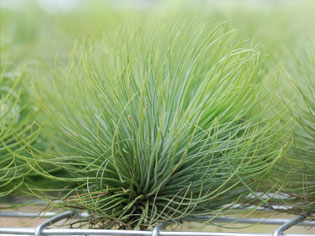 Photo credit: Charis Chiang
The Tillandsia andreana is an eye-catching, beautiful plant due to its spherical shape and thin, linear leaves. It grows well in partial sun and should be watered regularly by spraying. It often produces one to two flowers at a time.

The most common way to display it is by mounting it on a rock or piece of wood, allowing the plant’s roots to wrap around the base naturally.
7. Tillandsia cyanea The Tillandsia cyanea is an unusual air plant because it can also grow in well-drained soil. It is famously known as the Pink Quill because of its conspicuously large bloom, compared to the rest of the plant. The “pink quill” on the plant is not actually its flower, but the inflorescence that the flowers grow on. The flowers are purple in colour when they bloom.

A tough houseplant, the Tillandsia cyanea grows well in bright indirect sunlight and requires very little water to thrive. Spray-watering it once a week is enough to keep it healthy and happy. 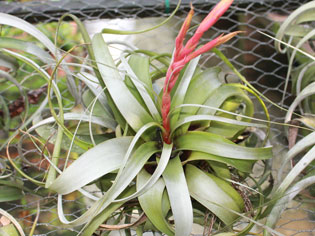 The Tillandsia xerographica is known as Giant Tillandsia as this species can grow up to 60 cm in width. It is a naturally stunning plant that is loved by air plant enthusiasts for its tapered silver-green leaves that spiral downwards and curl into themselves, forming a rosette.

It is one of the few air plants that thrives in both direct and indirect sunlight. Tillandsias grow at a slow rate, so be patient with your Tillandsia xerographica and shower it with love and care for it to grow into the large beauty it can become.

Learning More
If you think you are ready for an air plant of your own, or just want to learn more about caring for one, come down to our monthly Gardeners’ Day Out for all your air plant needs. There will be booths from various nurseries selling air plants and air plants accessories, as well as various talks about caring for plants and gardens. Remember to bring your own bag to place your purchases in.

Have gardening tips and expertise to share? Join our Community in Bloom programme to meet other horticulture enthusiasts and contribute to Singapore’s green spaces.

To learn more about the these and other interesting plants, check out NParks Flora&FaunaWeb, which features cultivated and native plants, as well as a variety of animal life sighted in our parks and nature spaces.

About the writer
Tammy Lee is a Third Year English Language major from the National University of Singapore (NUS). As part of her school’s Arts and Social Sciences internship programme, she worked with NParks’ Communications and Community Engagement department for three months. During her time with NParks, she contributed articles for My Green Space, created content for its social media platforms and participated in events like Ubin Day 2019 and Singapore Botanic Gardens Heritage Festival.