Look up to the sky! It is not a plane and it certainly isn’t Superman… so it has got to be a bird! But with over 400 species of birds in Singapore, what type of bird, exactly, is it?

In addition to pigeons, we come across many darkly coloured medium-sized birds almost daily. These ‘black birds’ share our living spaces throughout Singapore, flying overhead or hopping around on pavements.

But despite their omnipresence and proximity to us, can you correctly identify these birds? Learn more about eight of the most common ‘black birds’ in Singapore that are often mis-identified. Previously endemic to the Indonesian islands of Java and Bali, the Javan Myna (Acridotheres javanicus) was reportedly introduced to Singapore in the 1920s through the caged bird trade.

It is primarily grey with a yellow bill and eyes, and two distinct white patches that can clearly be seen on the underside of its wings in flight. Since becoming established in Singapore, this invasive species has flourished and is now the most commonly found bird in the country. 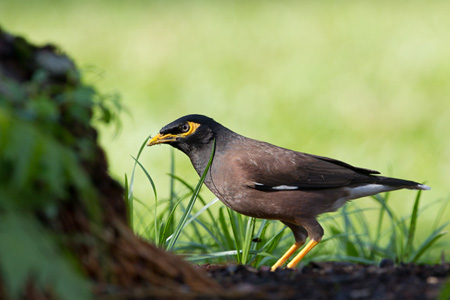 Once a commonly found bird in Singapore, the Common Myna (Acridotheres tristis) is a native species that has declined due to competition with the introduced Javan Myna.
It can be distinguished from the Javan Myna by the yellow skin around its eyes and brown body. 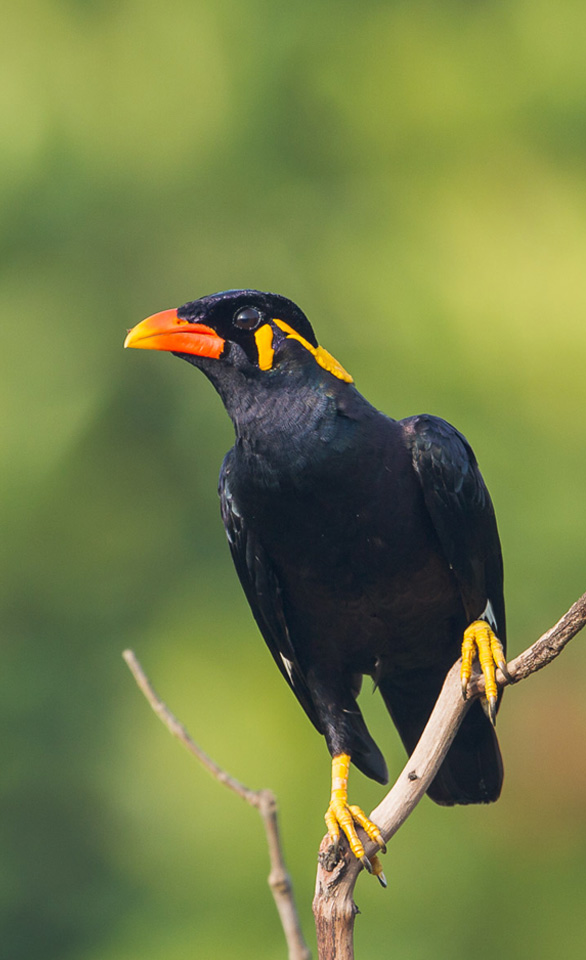 Rarer than the other myna species in Singapore, the Hill Myna (Gracula religiosa) is also the most unique-looking with yellow facial wattles and an orange bill that has a yellow tip.

This species is popular in the pet trade due to its ability to mimic everyday sounds including human speech. In Singapore, it is largely confined to forested areas and does not associate with people. 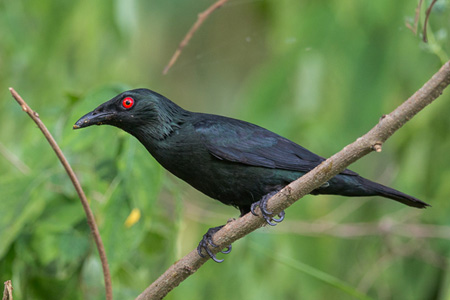 The Asian Glossy Starling (Aplonis panayensis) is one of Singapore’s most abundant birds and occurs in a wide range of habitats. Adult birds have a glossy green plumage that appears black in poor light. It also has a black bill and bright red eyes. The Asian Glossy Starling is highly gregarious and large flocks can be observed at fruiting trees and roosting sites. 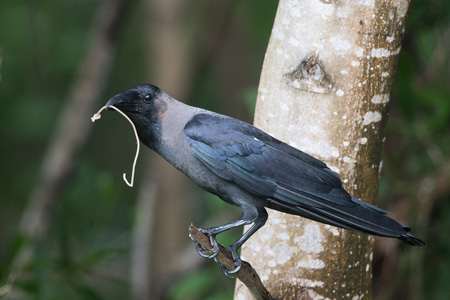 The House Crow (Corvus splendens) is native to the Indian Subcontinent but has been introduced to various countries including Singapore. Although it is usually described as an entirely black bird, it has a greyish collar. These birds are often observed in flocks around urban areas. 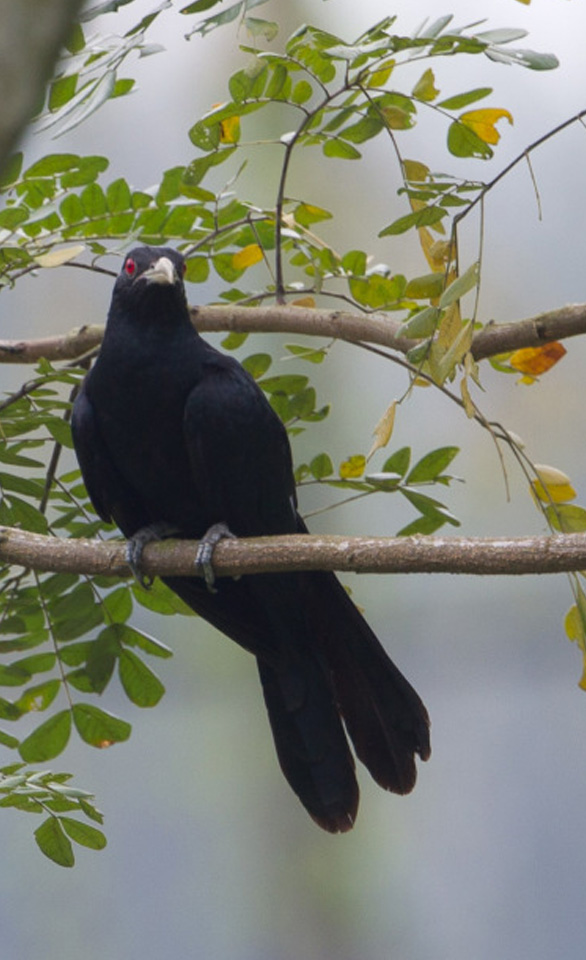 The Asian Koel (Eudynamys scolopaceus) Is a large cuckoo native to Singapore. It is more often heard than seen, with its distinctive call awakening people in the early morning. The male Asian Koel is almost entirely black, aside from its red eyes. The female has the same red eyes, but has a dark brown plumage that is heavily spotted.

This species is a brood parasite, depositing its eggs in the unattended nest of a host bird — usually a House Crow! The Asian Koel chick hatches before the host’s chicks and forces the remaining eggs out of the nest. This brood parasitism actually reduces the crow’s reproductive success and keeps its population in check. 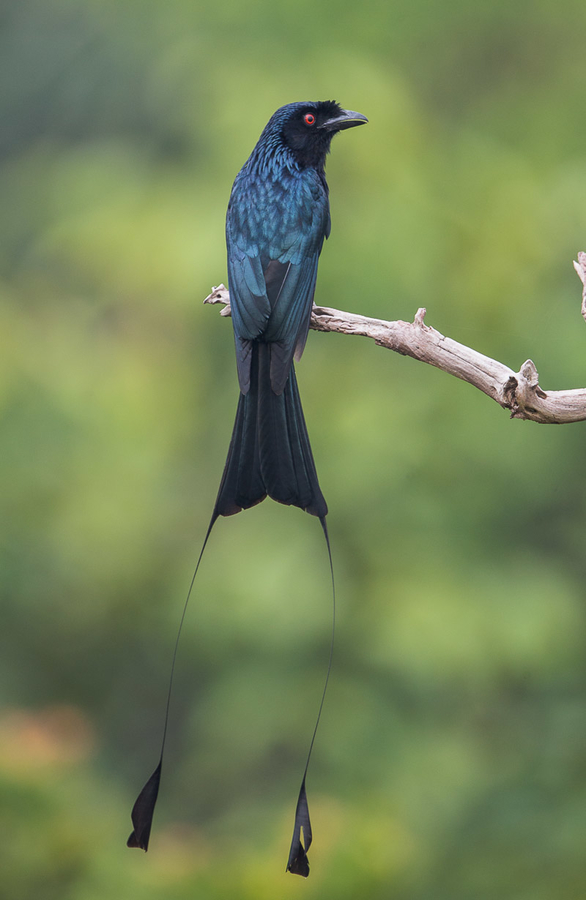 While the Greater Racket-tailed Drongo (Dicrurus paradiseus) may resemble the male Asian Koel with its similar black plumage and red eyes, its has two distinctive, modified outer-tail feathers that have rackets at the tip, hence its name.

This native forest bird is commonly observed in forested areas throughout the country. It is a proficient imitator of the calls made by other birds. 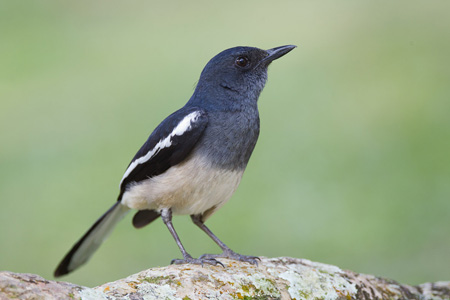 At about 20 cm, the smallest of the species on this list is the native Oriental Magpie Robin (Copsychus saularis) that was formerly widespread in Singapore. However, its population underwent a period of decline, likely due to a combination of habitat loss, poaching and competition from other birds such as the Javan Myna. Thankfully, its population appears to be recovering and it can be observed in many parks around Singapore.

It is an excellent songster that is often detected by its melodious song. Males have distinctive black upperparts and white underparts, while in females their upperparts are grey instead.

Want to learn more on identifying garden birds? During this stay at home period, you can do so even without leaving your house! Learn more about our common birds through our interactive e-learning module, accessible via Internet Explorer or Mozilla Firefox browser.

Bryan Wu is a third year journalism student from Nanyang Technological University’s Wee Kim Wee School of Communications and Information. As part of his school’s professional internship programme he chose to intern at NParks’ Communications and Community Engagement department. In this time, he has created posts for NParks' social media platforms, written articles for My Green Space and worked on producing videos to inform the community on the work NParks does.