Singapore’s marina seabed is made up of soft sediment and sand at the ocean floor, and is mostly hidden from plain sight, giving the impression that it is devoid of life. However, you just have to examine it more clearly to find that it is home to many small invertebrates such as worms, echinoderms, molluscs and crustaceans. The marinas are considered modified marine environments, providing shelter and refuge to many marine organisms.

These organisms are vital to the marine ecosystem, providing ecosystem services such as nutrient cycling, a process when nutrients such as Nitrogen or Carbon are used, stored, recycled and transformed in the environment for the benefit of other marine organisms.

Some species are also more sensitive to pollutants, and the abundance of such species found in the marinas can be used to gauge the marinas’ water quality.

Here are some unique organisms that can be found in the seabed of Singapore’s marinas. 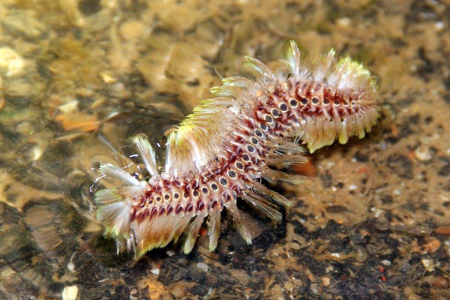 Polychaetes are an immensely diverse group of organisms that dominate the seabed of Singapore’s marinas. Apart from being a major food source for many marine organisms, these worms have multiple ways of feeding. Some use their powerful jaws to eat smaller invertebrates, while others use tentacles to gather organic particles in the sediment.

One of these species of worms, the Golden Fireworm (Chloeia flava), is a beautifully large polychaete that can grow up to 10 cm long and 2.5 cm wide, with mesmerising and elaborate patterns. It is carnivorous, feeding on coral polyps, sponges and sea anemones and is most active at dawn and dusk.

As a defense mechanism against predators, this worm has fine bristles that break off easily upon contact and can cause pain and itchiness. 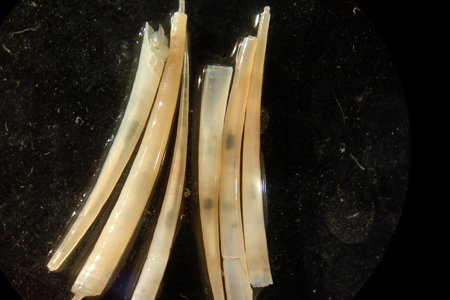 If you go trawling through the seabed, you might find peculiar shells that resemble the elongated teeth of elephants. Tusk shells or scaphopods are a type of mollusc that live in the soft bottom sediment. They are vary in lengths, from 0.5 cm to 15 cm.

They burrow in the seabed using a muscular foot that extends from the larger end of the ‘tusk’. They feed on microscopic organisms, some substituting this with vegetable matter, and expel waste from the narrow end of their shell. 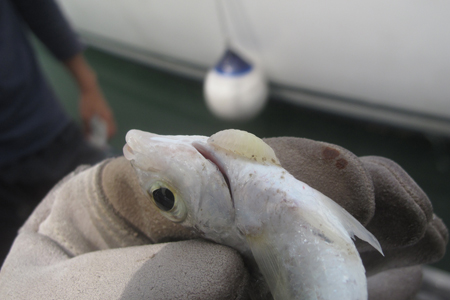 Isopods are small, a few millimetre-long crustaceans that form part of the basis of food webs for an immense variety of marine organisms. Physically, they are flattened dorsoventrally (this means its body is flat on both top and bottom surfaces) and can be scavengers or blood-sucking parasites.

The Tongue-eating Louse (Cymothoa exigua) even attaches itself onto the tongue of fish and its own body eventually replaces the organ. The larvae enters through the gills of the fish and using its clawed legs, the Louse stretches and attaches itself to the base of the tongue of its victim. The isopod would remain there for years, sucking the blood out of the fish’s tongue until it withers and eventually, this parasite would permanently replace the tongue. 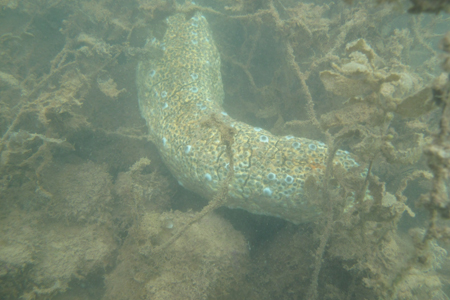 Sea cucumbers of the order Holothuroidea resembles the cucumber fruit, but in fact are animals that move about on the seabed. They gather sediment with their leaf-like feeding tentacles to extract the decaying organic material within for food.

They play an important role in the recycling of nutrients in marine ecosystems. Some sea cucumbers provide a home for small fishes and shrimps. They defend themselves by ejecting sticky threads to distract predators. In Asia, some species are prized as a delicacy and used in traditional medicine. 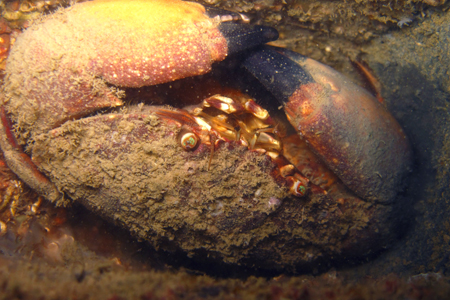 The Stone Crab (Myomenippe hardwickii) is one of Singapore’s most common crabs. This large brown species can be found nestled among rocks or gaps in the seawalls of the marinas. Its tooth-like structure at the top finger of each muscular pincer allows it to easily crush the shells of molluscs for food.

It pushes its arms and body against the wall of its crevice to avoid being dislodged from its hideout. But when caught, it will remain completely still, as if it was dead. The Stone Crab is also known by fishermen as the Thunder Crab. This name is derived from the belief that once pinched, only thunder can release the crab’s tight grip. This is a fallacy and the best way to release its grip is to let the crab touch the ground to escape. 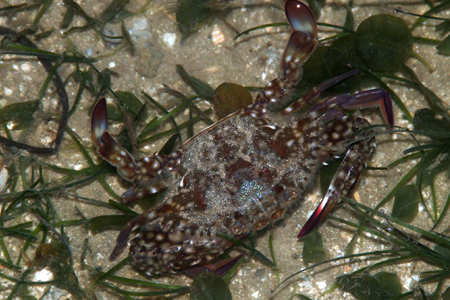 Found buried in our seabed under sand or mud is one of Singapore’s favourite types of seafood, the Flower Crab (Portunus sp.). It belongs to the family of swimming crabs (Portunidae) whose hindmost pair of legs are shaped like paddles.

The Flower Crab comes out to feed during high tide on various organisms such as bivalves, fish and, occasionally, macroalgae. Its specially adapted paddle-like legs enable it to swim through the water with amazing speed and snap at prey and predators alike with its long sharp pincers. However, it is unable to survive for long periods out of the water.

Can’t get enough? Watch this clip to experience and observe the many critters that call our marinas home. The enhancement of such ecosystems and conservation of our marine species contribute towards efforts to transform Singapore into our City in Nature.

Learning More
Learn more about our Nature Conservation Masterplan, particularly the Marine Conservation Action Plan that aims to safeguard marine life and environment.  You can also read more about out coastal and marine ecosystem here as well as how you can help out in conservation efforts.

You can contribute by participating in the Plant-A-Coral, Seed-A-Reef Programme, a platform for organisations and individuals to support habitat enhancement efforts at the Sisters’ Islands Marine Park. Visit the Garden City Fund here for more information.

Certain parts of this article are adapted from Hidden Havens: Exploring Marine Life in Singapore’s Marinas.

A collaboration between NParks and partners at the National Univeristy of Singapore, this book brings readers into the hidden world under the sea. Admire the colourful and fascinating creatures showcased and learn about where they can be found. Follow the journey from the submerged surfaces of floating pontoons in marinas, through the water column and to the seafloor. Download the book here www.go.gov.sg/hiddenhavensbook.

Bryan Wu is a third year Journalism student from Nanyang Technological University’s Wee Kim Wee School of Communications and Information. As part of his school’s professional internship programme he chose to intern at NParks’ Communications and Community Engagement department. In this time, he has created posts for NParks’ social media platforms, assisted with NParks video productions and written articles for My Green Space.

Margarette Chang currently works in the Coastal & Marine branch at the National Biodiversity Centre of NParks. She is involved in managing Intertidal Watch, a citizen science programme where ordinary residents can learn to become citizen scientists. This involved analysing data analysis and facilitating intertidal surveys. A fresh graduate, her love for nature and marine biology has inspired her to seek a career in marine conservation.