Born and Bred in Singapore

Despite our small size, Singapore is actually home to a significant array of native animal and plant species.

Our native animals range from amphibians to reptiles to mammals. They are mostly residents of forested areas on the island, making them extremely uncommon to encounter. On the contrary, some of the plant species can be found in our parks and gardens. Some of the native plants can even be used as herbs and medicine.

Due to urbanisation and development over the years, some of these species are endangered due to habitat loss. This makes our conservation efforts even more important, for us to ensure these natives of our land continue to survive and thrive as part of the living legacy we leave for future generations of human Singaporeans.

Here are seven species that are native to Singapore. 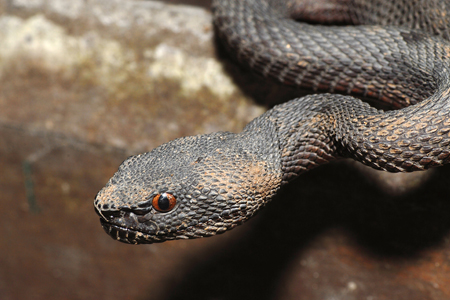 The Mangrove Pit-viper (Cryptelytrops purpureomaculatus) is an endangered native reptile species. It is a shy snake that has a purplish-brown body, making it camouflage with the branches of mangrove trees where it usually coils around. It is more active at night.

Measuring at approximately 1 m long, this snake has a broad triangular head – a distinct feature when compared to its relatively stout body that is covered in keeled scales. It has a narrow white stripe along each side of the ventrum and its hatchlings have dark brown saddle bars along their backs.

Distributed along the coasts of the Malay Peninsula and Sumatra, the venomous snake has also been sighted at the Sungei Buloh Wetland Reserve, Pulau Ubin, and Pasir Ris Nature Area. It feeds primarily on lizards, frogs and other small animals.

Interestingly, it bears live young! This means the baby snakes develop inside their mother. 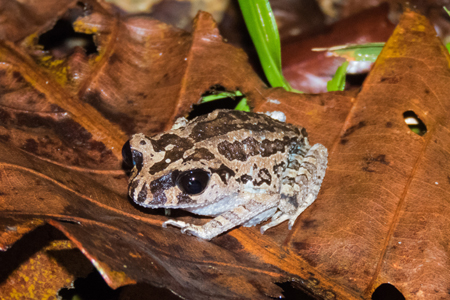 The Black-eyed Litter Frog (Leptobrachium nigrops) belongs to the family of Amphibians. Identified by its irregular blotches on its grey or brown body, the frog’s other prominent features also include its white underside with blackish specks and its short, slender limbs.

Measuring at only about 4 cm, this small creature is nocturnal and insectivorous. It lives among leaf litter on forest floors and is confined to the Central Catchment Nature Reserve.

Its call is a loud, machine gun-like rattle and when disturbed, it will assume a low crouch position. The species breeds in shallow forest streams and its tadpoles are almost entirely black. 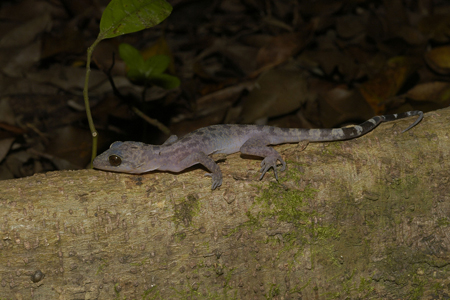 The Singapore Bent-toed Gecko (Cyrtodactylus majulah) is an uncommon native reptile species that measures about 68 cm. It has a pinkish grey body with black blotches down its back and a blackish tail with pale bands. Its eyes are in dark red, making it extremely alluring.

This species is nocturnal and arboreal. It feeds mainly on insects and inhabits forests, as well as freshwater swamp forests. It also frequents tree trunks, leaves and low shrubs. While it is a native of Singapore and is confined to the Central Catchment Nature Reserve and Pulau Tekong, the Singapore Bent-toed Gecko has also been found in Pulau Bintan of the Riau Archipelago of Indonesia. 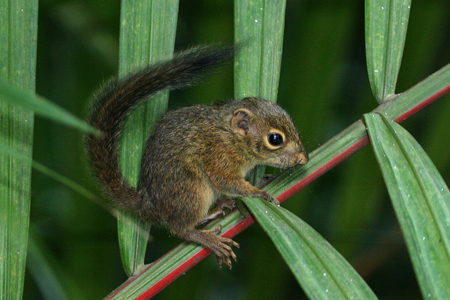 The Slender Squirrel (Sundasciurus tenuis) is an agile creature that is highly active during both day and night. It has an olive brown, slender tail and body and also a blunt snout. There is a pale orange-brown ring around its eyes.

Measuring about 15 cm, the squirrel is a small species that occurs in primary and secondary forests and is usually found on trees. It feeds on soft tree barks, fruits, insects and small vertebrates, such as geckos. Occasionally, it may make its way to the ground if it can find food there.

In Singapore, you may be able to spot the Slender Squirrel in the Central Catchment Nature Reserve, Bukit Batok Nature Park and Singapore Botanic Gardens. 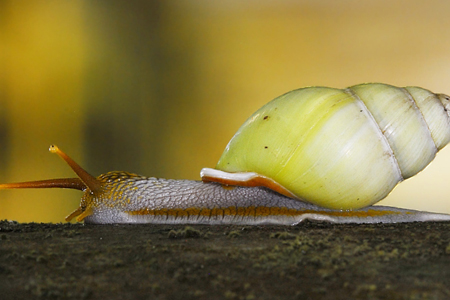 The Green Tree Snail (Amphidromus atricallosus temasek) is a robust, yellowish green shelled snail, with its shell in a left-handed coil. It has a creamy white body, a reflexed lip and a black mark at the aperture. It measures around 30 to 50 mm and is largely arboreal.

This species feeds mainly on the algae and other material found on leaves and tree barks. It is likely to occur at very low densities in forested, terrestrial areas. In addition to Singapore, it can also be found throughout Peninsular Malaysia.

The Green Tree Snail is popular amongst shell collectors, and is now endangered in Singapore. 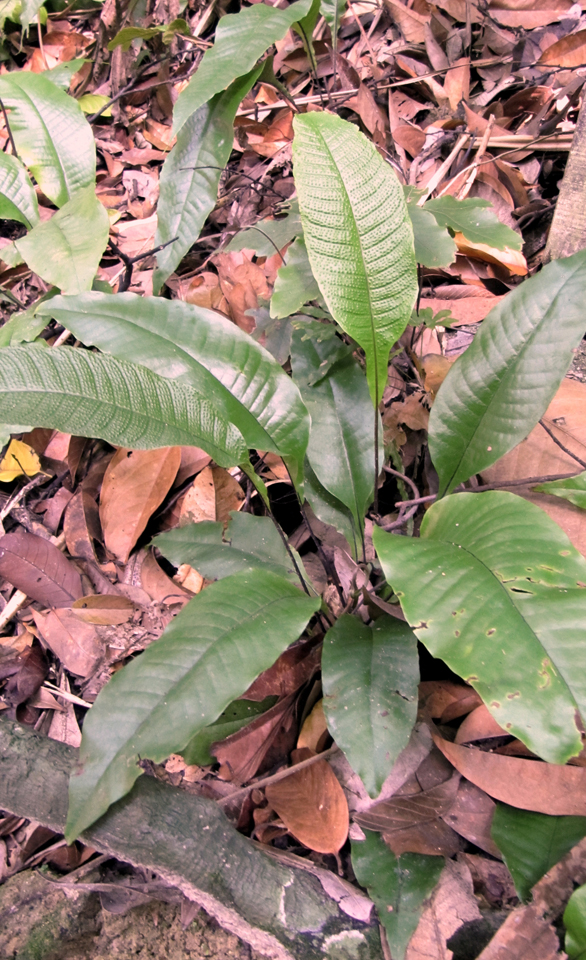 The Monitor Lizard Fern (Tectaria singaporiana) is a native fern species. Standing at about 85 cm tall, it has erected fronds with a reddish-brown stalk. The stalk is scaly at the base and has hairs pressed against the surface towards the top.

It grows in lowland forests and in damp, shaded places often near streams. It has been sighted in Bukit Timah Nature Reserve and Central Catchment Nature Reserve. It is relatively easy to cultivate the fern and it is now commonly grown in parks, gardens, indoor planting, container planting and even terrariums.

This is a medicinal plant that can be used to cure fever and as a post-natal tonic in Malay folk medicine. 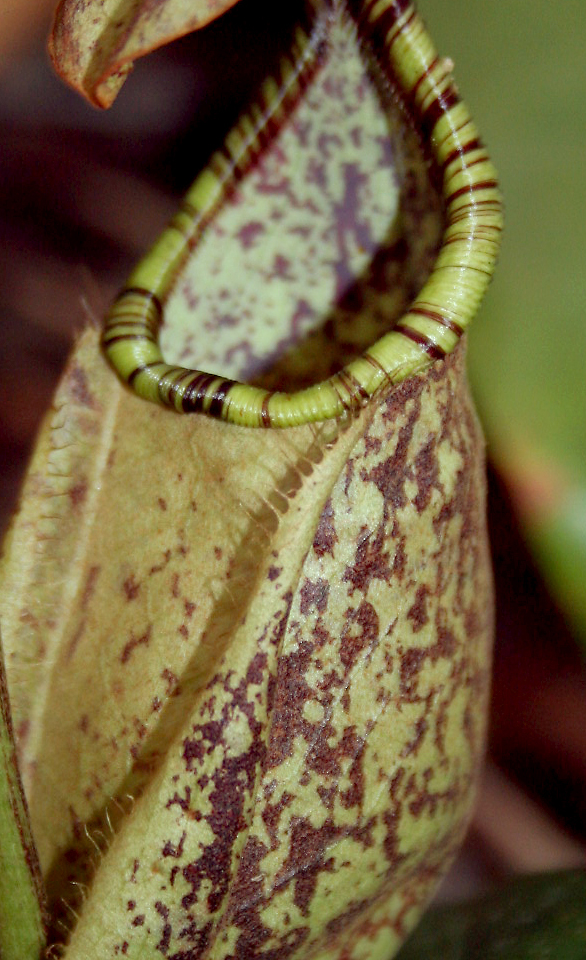 The Raffles Pitcher Plant (Nepenthes rafflesiana) takes on a vine-like growth and has the ability to climb up to 15 m or higher, with tendrils reaching over 1.1 m in length. It is a native species that is currently vulnerable, threatened with habitat loss.

It does not have a stalk and its leaves have a leathery texture. The leaf tips terminate in coiling tendrils, which under ideal conditions are modified into prey-catching pitchers. These pitchers are partially filled with rainwater and enriched with digestive enzymes secreted by glands on its waxy internal walls.

The plant is dioecious, with the male and female flowers found on separate plants. Blooming only occurs once or twice a year and pollination is aided by nocturnal flies and moths. The fruits of the plant come in the form of clusters of explosive capsules that mature from green to brown. They are lightweight, threadlike and have wind-dispersed seeds.

The Raffles Pitcher Plant can be used as an a herb and spice. In Malaysia, its roots are boiled and made into poultice to treat stomach-aches and dysentery. Stem decoction can also be drunk to relieve fever and cough. In Borneo, the pitcher fluid has been used to moisturise skin, soothe burns, treat eye inflammation and as a laxative.

Learning More
Singapore is home to an incredibly wide range of biodiversity. Our four nature reserves as well as the Sisters’ Islands Marine Park, are core habitats for our native biodiversity. Find out more about our City in Nature.

Please email wong_yeang_cherng@nparks.gov.sg for more information on our internship