Frogs are amphibians meaning they live on land and in water. There are over 7,000 frog species all over the world and in Singapore, we have about 30 species.


Check out six native frog species here on our island! 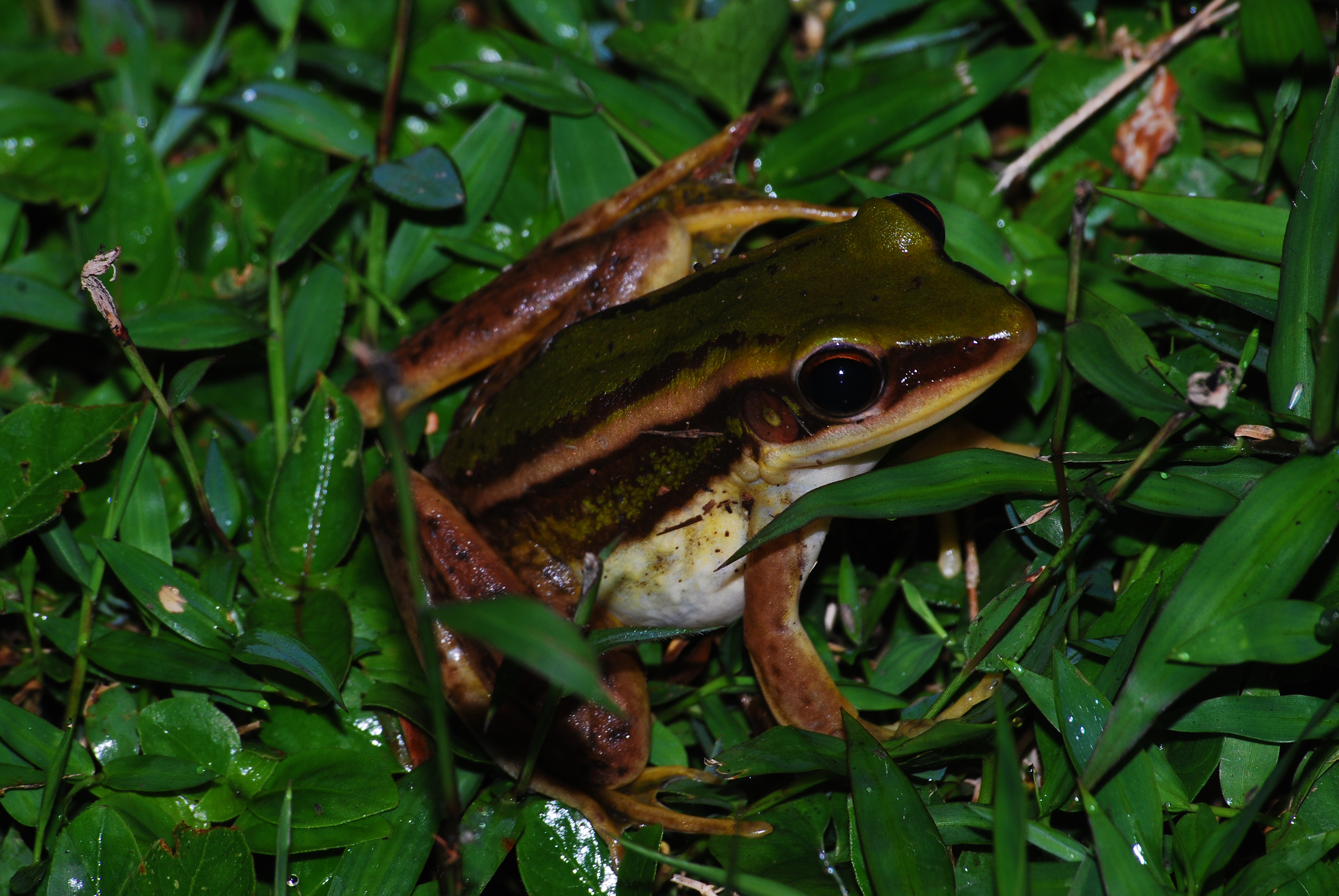 The Green Paddy Frog (Hylarana erythraea), also known as the Common Greenback, can grow up to 4.5 cm for males and 7.5 cm for females. It has a distinctive white band that runs along each side of its green body. It also spots a white upper lip.


This nocturnal frog’s main diet consists of small invertebrates including insects. Amphibians like the Green Paddy Frog thrive in a clean aquatic environment, thus making them a natural biological indicator of the health of the particular ecosystem. 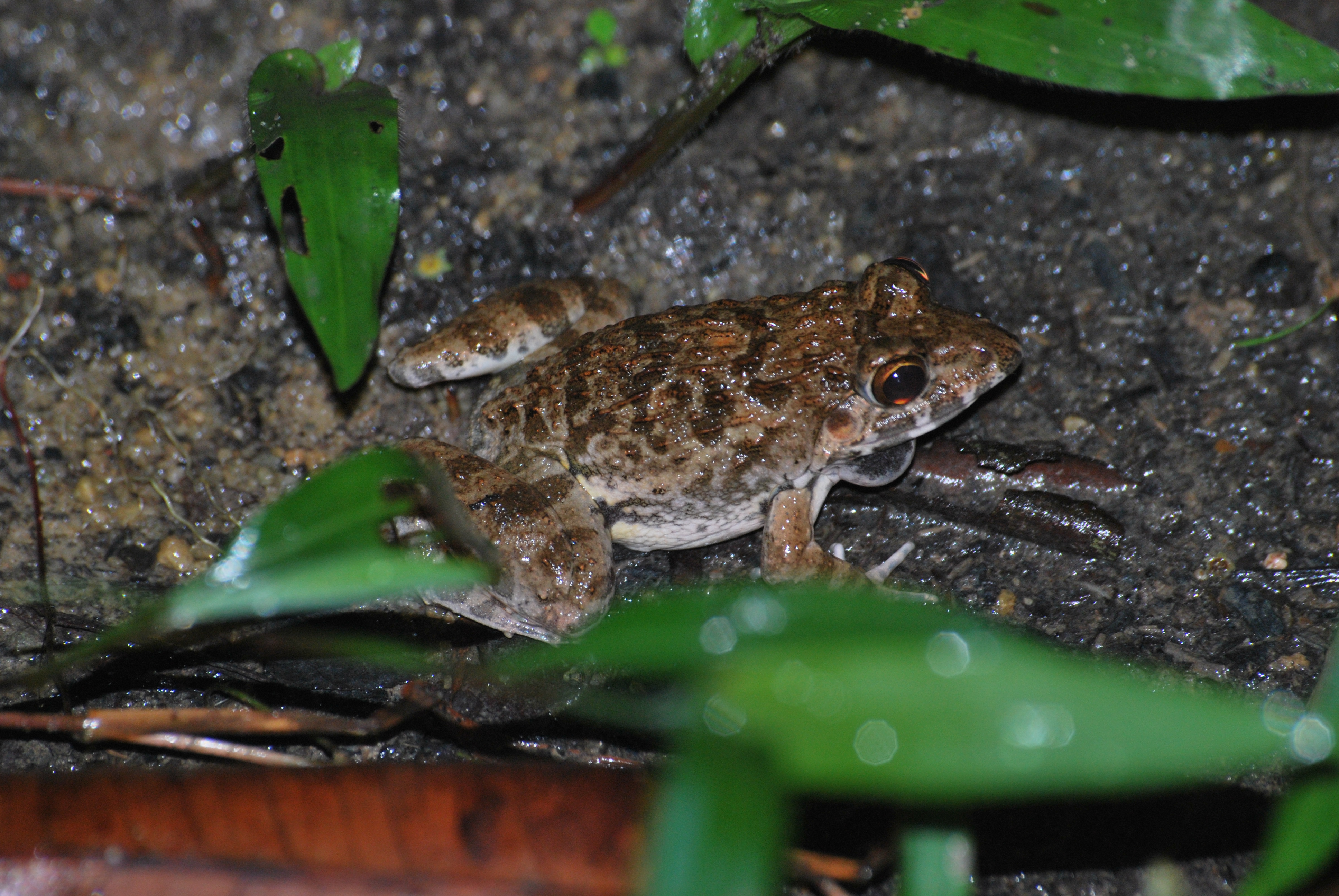 The Field Frog (Fejervarya limnocharis) has a colour that is more toad-like with its largely brown skin and irregular dark blotches. This frog usually grows up to 6 cm and has very muscular hind legs with half-webbed hind feet.


Nocturnal, it feeds on small invertebrates including insects and the female usually lays its eggs in large clutches in stagnant water. This frog makes its home in built-up urban areas and gardens like Jurong Lake Gardens. 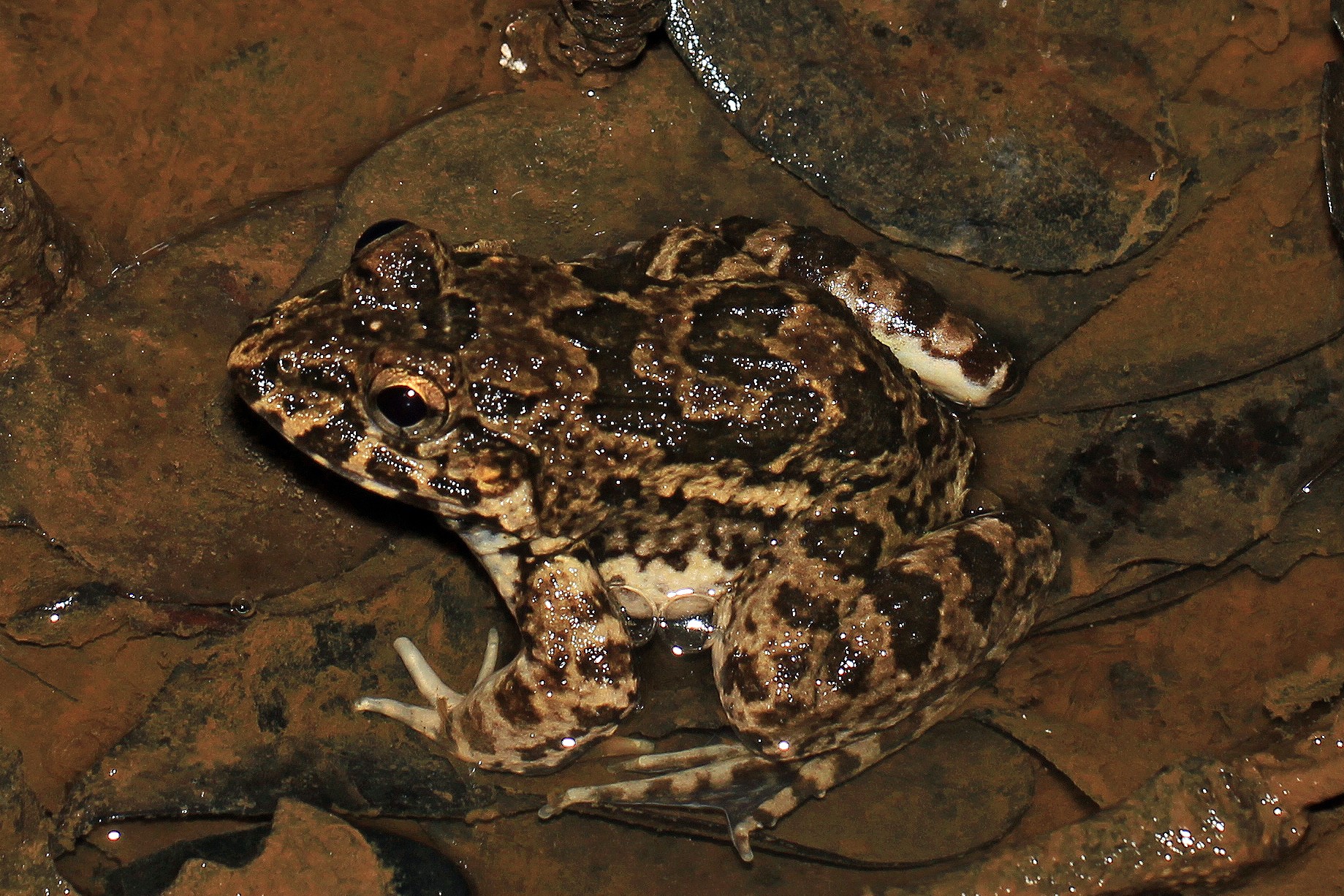 The Crab-Eating Frog (Fejervarya cancrivora) has similar markings on its body as the Field Frog, but it grows much larger (up to 8 cm for males and 10 cm for females). Another feature of this frog is that its hind limbs are extensively webbed.


Despite its name, this frog’s diet mainly consists of small invertebrates including insects. However, it can consume tree-climbing crabs if the opportunity arises. The Crab-Eating Frog also has a unique call which sounds like gargling. It is able to live in freshwater and can tolerate seawater as it can control the urea concentration in its body, so that it does not lose water to its surroundings via osmosis. 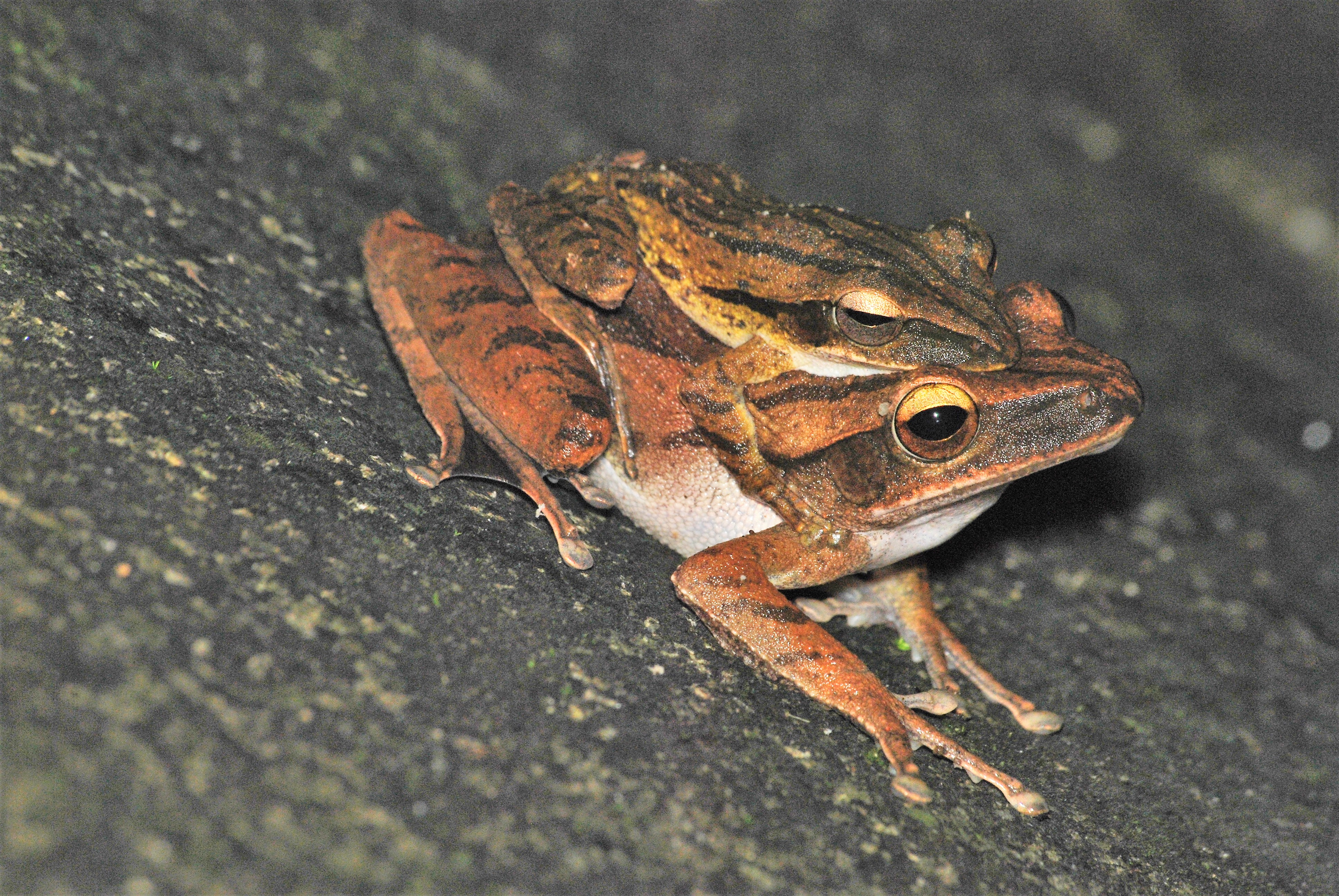 The Four-Lined or Common Tree Frog (Polypedates leucomystax) usually has a series of dark stripes on its upper body. Males grow up to 5.5 cm and females, up to 7.5 cm. This frog has a pointed snout and only its hind feet are webbed.


It is most recognisable by its call which sounds like a loud, nasally quack and is often heard during rainstorms. It feeds mainly on insects and lives on plants. When the female lays eggs, it builds a nest made of foam on plants or rocks. This acts as a form of protection for the eggs. The Dark-Sided Chorus Frog (Microhyla heymonsi) is a tiny frog measuring up to 2.5 cm. It is yellowish-brown, has a thin white stripe along its back, a white belly and distinctive black bands that run along its sides.


Despite being extremely small in size, it produces an extremely loud kriiiiiiik sound. It usually feeds on small invertebrates including insects and like many other species on this list, it is nocturnal. You can usually find the Dark-Sided Chorus Frog near small puddles and ponds in many of our parks. 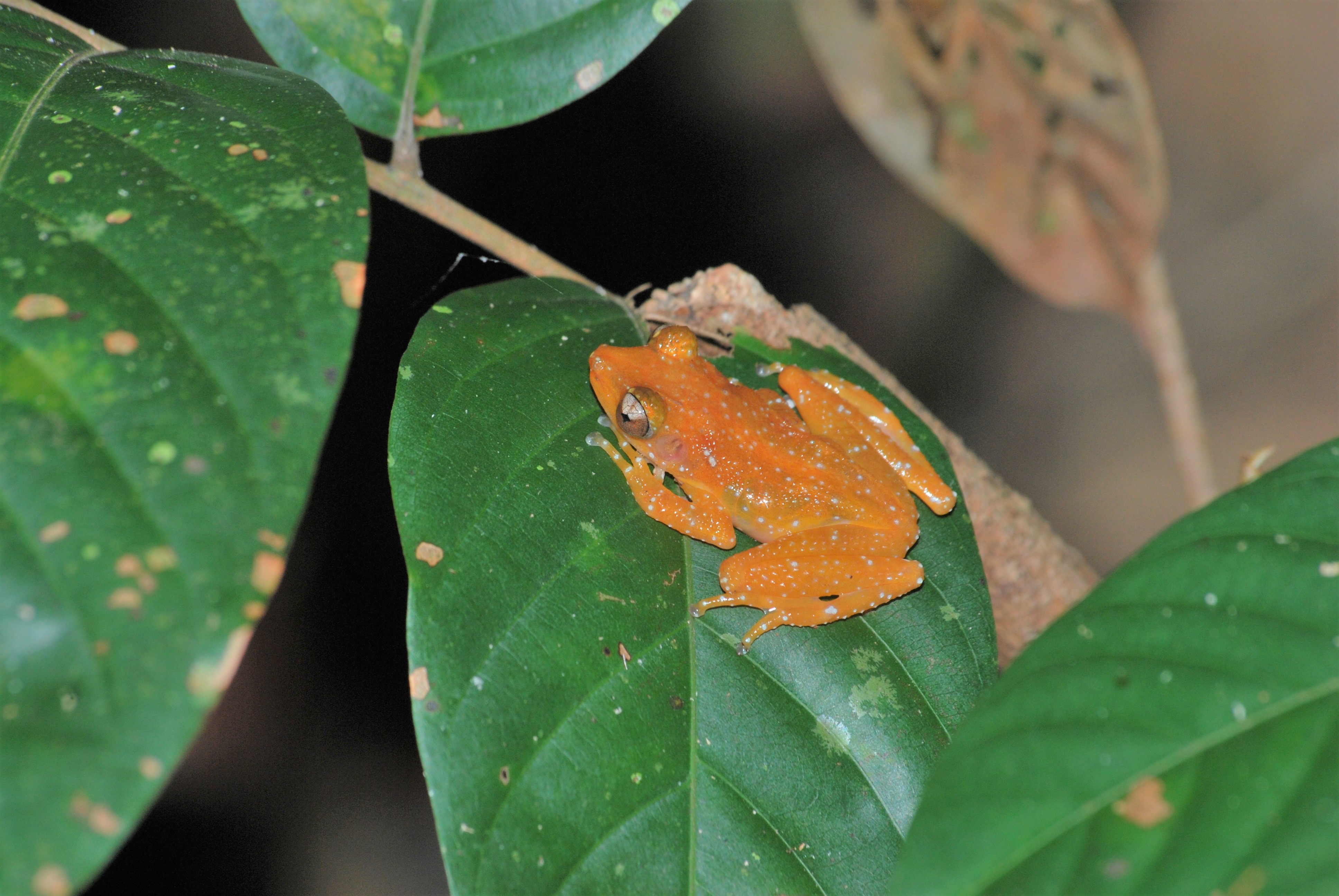 The Cinnamon Bush Frog (Nyctixalus pictus) is a distinctive frog with slender, long limbs. The tips of its feet are flattened to its digits and its body is usually brown or reddish brown with either white or yellowish spots. This frog often lays its eggs in tree cavities. The males make soft “poop” sounds usually in the evening. The Cinnamon Bush Frog can be found at Bukit Timah and Central Catchment Nature Reserves.

Prior research has shown that as a substitute for tree cavities, this species will also breed in artificial containers. NParks has translocated this species to suitable sites in order to expand their distribution and is currently monitoring them.

To ensure the well-being of our biodiversity, visitors to our nature parks and reserves should adhere strictly to the opening hours of 7 am to 7 pm. Disturbances to the nocturnal animals’ activities could mean disruptions to their natural behaviour, which can include them venturing outside the nature parks and reserves. This will endanger both their own safety and that of the general public.

Learn how to enjoy nature responsibly by observing some simple practices. In addition to the wildlife in Singapore, learn more about our Urban Biodiversity.

If you are heading to our green spaces, do the right thing and be socially responsible. Maintain a safe distance from other park goers and keep to not more than five persons in a group, with no intermixing between groups. Always wear a mask except when you are engaged in strenuous exercise or when consuming food, drink or medication.