With over 500 species of birds in Singapore, parrots still reign high on the list of favourites for many bird lovers. And it is easy to see why, with their beautifully coloured feathers and sociable nature.

Let’s celebrate parrots on May 31, also known as World Parrot Day. And for those who cannot get enough of them, here are some species of parrots and flora which are related to parrots, that can be found in our green spaces. Some of the flora have earned their parrot-related names from sharing similar characteristics while others get their names from resembling certain parts of the bird. 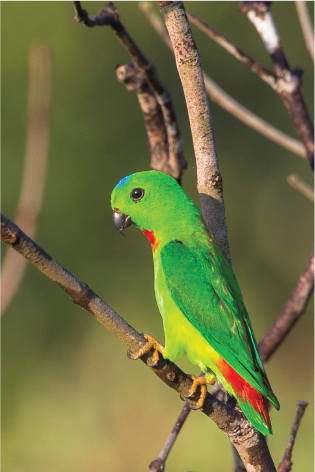 The Blue-Crowned Hanging Parrot (Loriculus galgulus) is a small bird of about 14 cm with a stubby tail. The male of this species is mostly green with tiny red patches on its breast and rump. The female is also green, but it does not have any red patches, instead, it has a blue crown, and thus its name.

This species is native to Singapore, but many of the birds of this species have also been brought in as cage birds, imported from neighbouring countries. This makes it hard to determine this endangered bird’s true population level here in Singapore. Based on estimations, there are only about 50 to 100 birds currently found locally. If you are lucky, you may see one feeding on flowers in the forest canopy or in areas like the Singapore Botanic Gardens, Sungei Buloh Wetland Reserve and on Pulau Ubin. 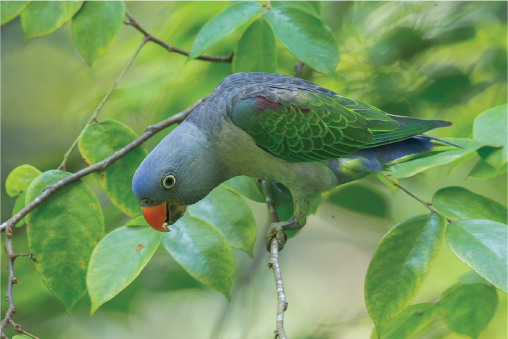 Another parrot species that can be found locally is the Blue Rumped Parrot (Psittinus cyanurus). The males of this species have red bills with a brown lower jaw, a greyish-blue head, a blackish upper-back, dark purple lower backs and greenish wings. The breast of these creatures is usually olive with a tinge of blue.

The females are slightly less colourful, with a brown bill and head, a blue back and a mostly green underside. This parrot’s breeding season is from May to June and it can usually be spotted nesting in natural tree holes at a high level above the ground. You may spot this species at the Bukit Timah and the Central Catchment Nature Reserves. 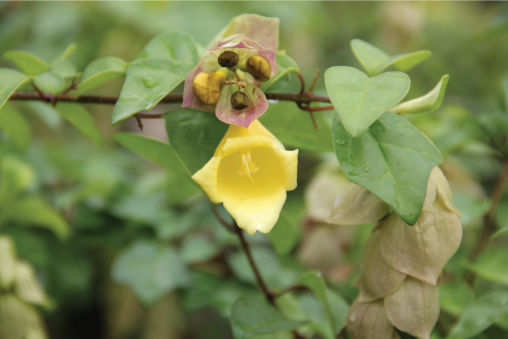 Parrot’s Beak (Gmelina Philippinensis) is a thorny shrub that produces yellow flowers that are 5 to 8 cm long. The flowers are arranged in hanging cones with pointed red bracts, resembling the shape of a parrot’s beak, and thus that plant’s name.

This plant has a variety of medicinal properties. The fruit it produces is often mixed with lime for the treatment of cough and the juice of the fruit can be used to treat eczema of the feet. The juice produced by this plant’s roots is also used as a purgative and to treat fatigue. Although this species is native to Singapore, it has been presumed nationally extinct. 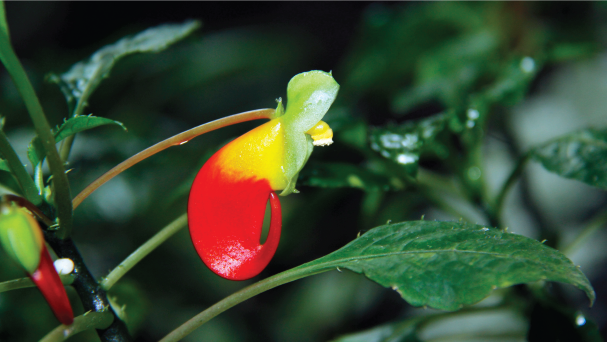 Native to Central Africa, the Congo Parrot (Impatiens niamniamensis Gilg) is a succulent herb that can grow up to 1m tall and it produces flowers that can come in a variety of colours such as purple, red, or bright yellow. The petals of this plant are often small, green or yellowish green.

The Congo Parrot does not grow well in high heat like temperatures of more than 25 degrees Celsius or humidity, but it can be grown successfully in air-conditioned premises here in Singapore. 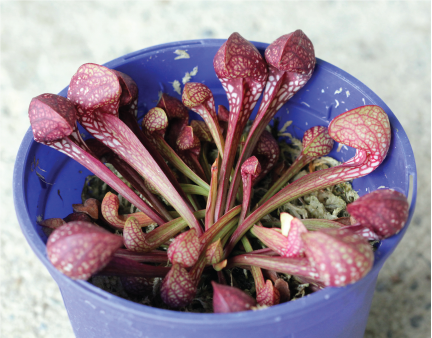 The Parrot Pitcher Plant (Sarracenia psittacina) is a herbaceous plant that can only grow up to 15 cm tall, producing hooded, tubular leaves that are then modified into snake-like pitches that can grow up to 25 cm long. These pitches are initially erect but these later lie prostrate with a small opening that is towards the direction of the middle of the plant.


Each pitcher also has a central wing down the base of the leaf which provides structural integrity to the pitcher. These pitchers are brightly coloured and contain nectar produced by extra floral nectaries to attract and trap insects. Inside the pitcher are tiny hairs to capture any unsuspecting insect that enters and to prevent the insect from escaping. As the pitchers of this plant may lose the ability to trap insects if the surroundings get too dry, this plant grows best in moist habitats like swamps and wetlands. 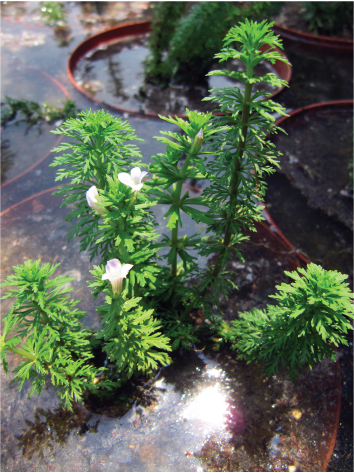 Parrot Feather (Myriophyllum Aquaticum) is native to the Amazon River in South America but can now be found locally. This aquatic plant produces two different types of leaves – submersed and emergent ones. The submersed leaves of this plant are green in color and have more lobes, making the plant appear fine and feathery, just like the outer covering of a parrot.


On the other hand, the emergent leaves grow above the water level, are a darker green in colour and have far less lobes. This plant also produces small, white flowers and can often be found in freshwater lakes and ponds, in canals with shallow water or other areas with slow-moving bodies of water.

Want to learn more about parrots and other kinds of birds? Learn more about our local common birds from the comforts of your home through our interactive e-learning module, accessible via Internet Explorer or Mozilla Firefox browser.

If you are interested to learn about the different flora and fauna found in Singapore? Visit NParks Flora & Fauna Web here.

Our City in Nature
Over the years, NParks has created a green network comprising roadside planting and a Park Connector Network that links up parks and other green spaces. Skyrise greenery dot developments while biophilic design has been adopted in restoring habitats.

Learning More
If you are visiting our green spaces, mask-wearing in outdoor settings such as parks, gardens and nature reserves is optional but continues to be required when you visit our indoor facilities, such as museums, galleries and enclosed visitor centres.

Do check out the visitorship levels of our parks using our safe distancing portal before you head down and avoid the ones with high visitorship. Learn about some simple do’s and don’ts when visiting our Nature Reserve and Nature Parks here.