The water column from the surface to the bottom of the sea is home to an extensive diversity of species.

These species flourish in our marinas due to the manmade pontoons and pillars offering shelter and protection. From strange-looking fishes to beautiful turtles, they are warmly welcomed in our marinas as they search for their next meal or mate in the water column.

Read on to find more about the varieties of unique organisms that can be found in the waters of our City in Nature.

The Blue-Barred Parrotfish (Scarus ghobban) is a species of marine ray-finned fish in the family Scaridae. Parrotfishes possess a set of tough, beak-like jaws which are in fact numerous teeth arranged in a tightly packed mosaic.

Parrotfishes use these strong jaws to grasp algae from coral during which they inadvertently dislodge bits of coral. This process forms part of the natural bioerosion process in reefs surrounding Singapore and results in the creation of sediment on the seabed. Our waters are home to seahorses (genus Hippocampus). These shy, peculiar-looking fish prefer hiding amongst the organisms that grow on seawalls or the sides of berthing pontoons rather than swimming out in the open.

Seahorses are one of only three species in the world whose males go through pregnancy. While the male provides the sperm for fertilisation as with most other species, it goes on to carry the fertilised eggs in a pouch on its belly until they hatch, resembling a pregnant mother! The Copperband Butterflyfish (Chelmon rostratus) is one of the three long-beaked species that make up the genus Chelmon. It is named after its insect namesake for its brilliant coloured patterns, and the way it gently flutters about the pillars and pontoons in our marinas, occasionally taking a break to feed on coral polyps or small invertebrates.

The Copperband Butterflyfish has a flat body that allows it to swiftly take cover in the safety of nearby corals. The false eye spots near its tail (the black circle in the upper right rear of the butterflyfish) is used to misdirect predator attacks to less vulnerable parts of its body such as its rear. The presence of butterflyfishes around reefs is often an indicator of the reefs’ good health. The Three-spot Frogfish (Lophiocharon trisignatus) is a member of the anglerfish family Antennariidae. It has a stocky and bumpy build and an unstreamlined body that is unlike any other fish. Due to these physical characteristics, the Three-spot Frogfish does not swim much, but ‘walks’ across surfaces with its fins instead.

Like other members of its family, the Three-spot Frogfish is an expert at blending into its surroundings as it looks exactly like a stone covered with algae. It deftly camouflages itself while lying in wait for unsuspecting prey to appear, before lunging towards it and sucking the helpless prey into its mouth. Despite its status as Near Threatened on the IUCN Red List, the Blue-spotted Fantail Ray (Taeniura lymma) is frequently sighted in Singapore’s marinas. It has a yellow oval-shaped body with striking electric blue spots, as well as two blue stripes along the length of its tail.

The Blue-spotted Fantail Ray glides over the sandy seafloor and lurks between gaps in seawall boulders for crustacean prey. Although it is usually shy and will dart away from danger, if threatened, it can inflict a painful sting with the venomous spines on its tail. 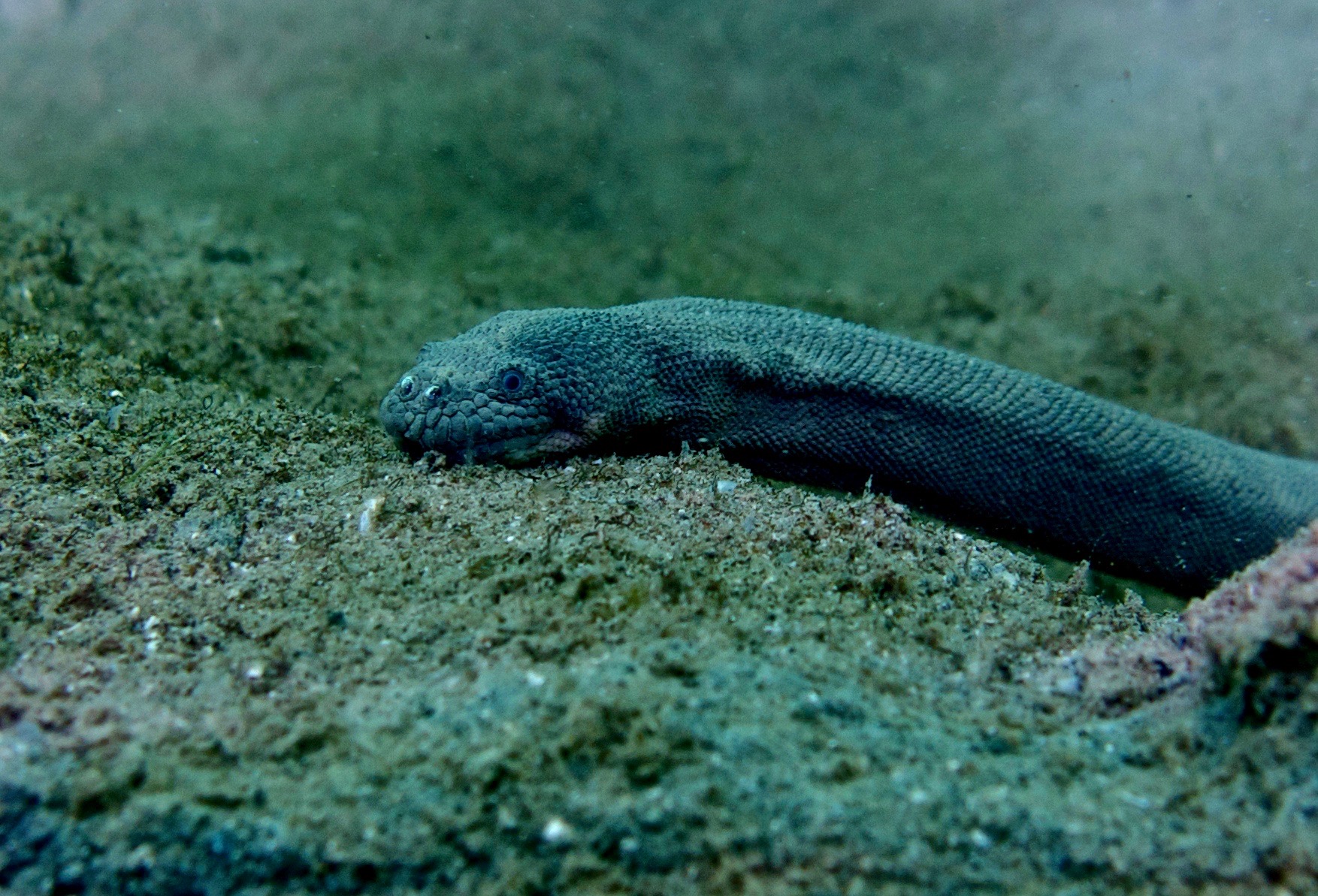 The Banded File Snake (Acrochordus granulatus) is a non-venomous snake that is occasionally seen in Singapore’s marinas. It is completely aquatic and almost helpless on land. One interesting characteristic of the Banded File Snake is that the female snake gives birth to its young live, instead of laying eggs.

The estuarine species adopts a laterally compressed shape as it moves through the water column to hunt small fish. Although its thin scales rip easily, it has a very rough texture that it uses to grip and constrict its prey. The Spotted Jelly (Mastigias papua) is one of the many species of jellyfish that visit our marinas, brought in and out by the changing tides. It lives in symbiosis with zooxanthellae (a photosynthetic alga), with the jelly moving through the water column to find light for their zooxanthellae and the zooxanthellae providing nutrients to its host in return.

Jellyfishes are known for their sting which can deliver excruciating pain. When in contact with these stingers (called nematocysts) found on the cells of the Spotted Jelly’s tentacles, planktonic prey can easily become lunch. The jelly’s bell also offers protection to small fish until they reach maturity. The Hawksbill Turtle (Eretmochelys imbricata) is a species of marine reptile that can sometimes be spotted swimming in the marinas. It gets its name from its protruded upper jaw which forms the turtle’s distinct pointed and curved beaked. This allows the hawksbill turtle to reach into cracks and gaps between the marinas’ structures, looking for crustaceans and sponges to feed on.

The significant increase in sightings in the waters and reported nests in beaches around Singapore have come about with expanded efforts to understand the turtle’s behaviour and stronger public awareness.

The first turtle hatchery at Sisters’ Islands Marine Park was established by NParks in 2018. Supported by HSBC’s 150th anniversary Community Fund through the Garden City Fund, the hatchery provides research opportunities for scientists to study local sea turtle populations. Over 80 turtle nests have been reported and more than 500 hatchlings released since 2017.

You can contribute by participating in the Plant-A-Coral, Seed-A-Reef Programme, a platform for organisations and individuals to support habitat enhancement efforts at the Sisters’ Islands Marine Park. Visit the Garden City Fund here for more information.

If you are heading to our green spaces, do the right thing and be socially responsible. Maintain a safe distance from other park goers and keep to not more than eight persons in a group. Always wear a mask except when you are engaged in strenuous exercise or when consuming food, drink or medication.


Certain parts of this article are adapted from Hidden Havens: Exploring Marine Life in Singapore’s Marinas.

A collaboration between NParks and partners at the National University of Singapore, this book brings readers into the hidden world under the sea. Admire the colourful and fascinating creatures showcased and learn about where they can be found. Follow the journey from the submerged surfaces of floating pontoons in marinas, through the water column and to the seafloor. Download the book here www.go.gov.sg/hiddenhavensbook.

Bryan Wu is a third year Journalism student from Nanyang Technological University’s Wee Kim Wee School of Communications and Information. As part of his school’s professional internship programme he chose to intern at NParks’ Communications and Community Engagement department. In this time, he has created posts for NParks’ social media platforms, assisted with NParks video productions and written articles for My Green Space.

Rachel Guan is a final year Environmental Earth Systems Science student at Nanyang Technological University’s Asian School of the Environment. She is currently interning full-time at the National Biodiversity Centre’s Coastal and Marine branch, focusing on Intertidal Watch surveys and data verification. Rachel is very passionate about the environment, and she hopes to raise awareness about the stunning marine biodiversity in Singapore.