Let’s Talk About Tortoises and Turtles 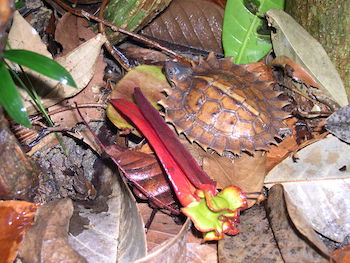 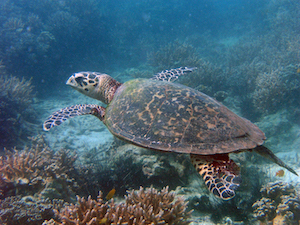 You see a reptile with a shell – is that a turtle or a tortoise?

Technically, you can call it a turtle, as “turtle” is used as an umbrella term to refer to all species of the order Testudines (formerly Chelonia), which includes turtles, tortoises and terrapins. All of them may also be referred to as Testudines or Chelonians, and they have a bony or cartilaginous shell which develops from their ribs and vertebrae.

But that’s not all. We provide you more tell-tale signs to differentiate between a tortoise and turtle!

Tortoises live mainly on land and may be found in a variety of habitats from deserts to tropical forests. On the other hand, being aquatic or semi-aquatic, most turtles live in the sea, wetlands (such as mangroves), ponds, lakes and rivers. Some semi-aquatic turtle species may be called terrapins – they tend to live in freshwater or slightly salty (brackish) water.

At a glance, the two look pretty similar with their hard oval shells. However, look closer and you would notice that a tortoise’s shell is more rounded and dome-like while a turtle’s shell tends to be thinner, flatter and/or more streamlined. Why this difference?

As tortoises live mostly on land, their shells are curved, providing better defence against predators. As for turtles, it is likely that the streamlined shape of their shells helps them swim more efficiently.

The limbs of tortoises and turtles are also differently adapted to their habitats. Tortoises have short stumpy, elephant-like feet that are padded as they walk mostly on land. Turtles have webbed feet or flippers for swimming more efficiently.

In general, tortoises are herbivores, eating foliage, flowers, and fruit. Turtles tend to be carnivores or omnivores, eating plants, fish, worms, shellfish, and various invertebrates. This, however, depends on the species as well – some tortoises prefer eating live food and some turtle species are strictly herbivorous.

There are a few species of turtles that can be found in Singapore. For example, the Spiny Hill Terrapin (Heosemys spinosa) and the Malayan Forest Soft-shell Turtle (Dogania subplana) are both native to Singapore.

The Spiny Hill Terrapin is a small to medium-sized turtle with a rosy brown shell. Its head and limbs are dark grey, with a reddish spot on each side of its head. While the adult is terrestrial, the juvenile is more amphibious. This omnivorous turtle inhabits mature forest where it is generally active only in the night.

The Malayan Soft-shell Turtle has a long neck and relatively large head and nose. It bears longitudinal stripes with an underside that is orange in colour. An elusive species, it lies partly submerged in clear, fast-flowing streams or quiet muddy backwaters in the forests. Its distinctive patterning helps it hide from potential predators.

Only two species of turtles are allowed as pets here in Singapore: the Malayan Box Terrapin (Cuora amboinensis) and the Red-eared Slider (Trachemys scripta elegans). Learn more about the import, export and transhipment of them here. Getting a pet is a lifelong commitment but if you are sure of wanting to take up this responsibility, you can visit here for more information. 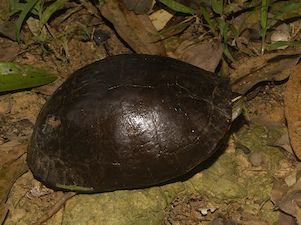 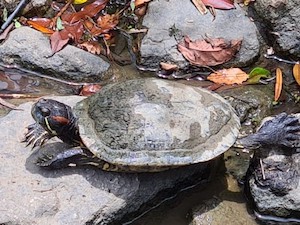 Be Kind
As many pet owners do not realise that turtles and tortoises are able to live for a very long time (at least 20 years!), they may think of releasing them into parks, ponds, reservoirs and waterways. Doing so is actually severely harmful to the animals and the ecosystem.

Eighty to ninety percent of animals that are released into the wild die within a day because they are unable to fend for themselves and survive in their new surroundings. At the same time, introducing non-native creatures into Singapore’s nature areas disrupts the ecological balance of our natural habitats, as they could compete with our native species for resources or even affect native biodiversity through transmission of exotic diseases and parasites. This is particularly damaging to our nature reserves, which have more sensitive ecosystems. Offenders caught releasing animals may be charged under the Wildlife Act and could be fined up to S$5,000.

If you are unable to continue caring for your pet turtle or tortoise, do look for ways to rehome it, such as by approaching an animal welfare group for help.