The Curious Case of the Field Mustard (Brassica rapa)

The name Brassica rapa might be unfamiliar, but most Singaporeans will likely have a favourite vegetable from this species. Just go to your local vegetable vendor and ask for xiao bai cai, napa cabbage or caisin and you are sure to get a positive response.

Belonging to the Mustard family (Brassicaceae), Brassica rapa is an important vegetable crop cultivated worldwide. The species is an Old World plant and the specific location of where it came from is shrouded in the mists of time. Some people have suggested that it originated from the area between the eastern Mediterranean to Pakistan and eastern China.

From its humble origins, the species has been domesticated into many varieties and has become culturally important as staple vegetables in many countries.

Characteristics
Self-incompatibility is a characteristic of Brassica rapa. This means that fertilisation of the flower of a plant using pollen from the same plant or a genetic-clone will not result in the formation of seeds. This is one method that plants adopt to prevent inbreeding and encourage genetic variability in future generations so as to better adapt and survive in a changing environment.

Rich in vitamins A and C and minerals like calcium, iron and magnesium, there are also some interesting chemicals in Brassica rapa that result in the characteristic flavours of the vegetables. For example, certain Brassica rapa vegetables have a bitter taste thanks to the more pronounced presence of glucosinolate.

Glucosinolate is a group of chemicals that evolved in Brassica rapa as a form of chemical defence against herbivores. Through breeding, this chemical’s content is higher in some varieties and lesser in others. Some types of glucosinolates result in a signature bitter aftertaste and is the reason for some of the vegetables’ polarising flavour due to its more obvious bitter flavour, for example in vegetables like caisin. Sulphur is also commonly abundant in Brassica rapa and is said to result in stinky flatulence from those who eat too much Chinese cabbage!


After centuries of human domestication, the species has successfully evolved to take up a wide variety of forms and flavours. Some look and taste very different from one another and the species has been organised into cultivar groups.

The four cultivar groups often seen in Singapore are:

The group includes local favourites like xiao bai cai, nai bai, kow peck chye, that can be stir-fried, boiled or steamed, and found from the family dinner table to epicurean Chinese restaurants. Leaf stalks are crunchy, with a lightly sweet taste.

Pak Choi is cultivated as an annual vegetable, preferring a sunny spot and regular watering. Varieties from this group are easy and quick to grow. Recent interesting varieties include ones with ornamental deep purple to reddish leaves and taste just as delicious and are healthy in stir-fried dishes and soups.

Most varieties average about six to eight weeks from seed to harvest. They are harvested when the plant reaches about 15 to 20 cm tall. Individual leaves can also be harvested. Start with the more mature outer leaves to extend the life of the plant. To harvest the whole plant, use a sharp clean pair of cutters or knife and cut at ground level, just below the base of the plant. It is best to harvest the whole plant just before flowering (also known as bolting). 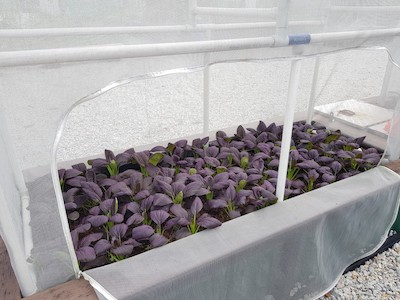 Turnips have a swollen root and green leafy tops. The root is commonly eaten but the leaves and shoots (turnip greens) are also edible, although, the leaves are more commonly consumed in southern European countries.

There are many varieties of turnips of both European and East Asian descent. They have different flavours, with root colours ranging from green, white, purple and red on the outside and mostly white flesh on the inside. Both leaves and roots also come in a variety of shapes and sizes. It is one of the oldest known Brassica rapa groups grown by humans, with documentation of cultivation by farmers in West and Central Asia after the end of the Glacial Period, as far back as 6,000 BC.

Turnips like full sun and regularly moist soil. From seed to harvest, most varieties take about two months. Certain varieties prefer cooler temperatures and are thus sown in spring and early summer in temperate regions.

Turnips taste slightly sweet but are not starchy in nature. They have a firm, crunchy texture much like carrots. Older turnips tend to have bitter, spicy notes in their flavour. Turnips are very versatile, with different varieties eaten and cooked in different ways. Generally, they can be pickled, steamed, stir-fried, stewed, roasted or simply added raw in salads.

Locally, another brown-skinned and white fleshed root vegetable, the Bang Kwang or Jicama (Pachyrhizus erosus), is sometimes sold as a ‘turnip’ in supermarkets. This root vegetable is an integral ingredient in popular local foods like popiah and kueh pie ti. However, the Bang Kwang plant is from the Bean family (Fabaceae) and is not botanically a turnip! 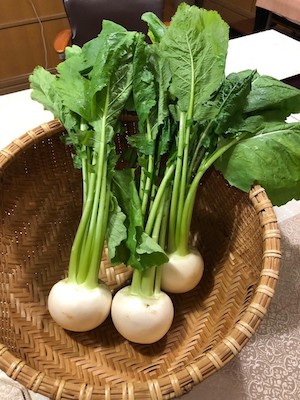 White skin turnips that can be found in local supermarkets.

Chinese cabbage is grown as an annual leafy vegetable. It is characterised by an upright basal rosette of broad, tender leaves and usually has winged leaf stalks (petioles). Leaf stalks and leaf veins are white to light green in colour while leaf colours can range from lime green to dark green, with recent varieties being red-purple in colour.

The name napa cabbage is often used interchangeably with Chinese cabbage but refers to varieties from (1) and (2). Varieties from these two groups are more often available in local markets and are commonly referred to as Chinese white cabbage, napa cabbage or da bai cai.

It was suggested that the Chinese cabbage originated from China in the 5th century and resulted from a natural cross of parents Pak Choi and turnip, both of which were cultivated in China for much longer. Tracing the Chinese diaspora, Chinese cabbage was then introduced to Korea, Southeast Asia and Japan where the group diversified further to the varieties we see today.

It is one of the most important vegetables in East Asia and are core ingredients in traditional foods like kimchi from Korea and suan cai from China. It can also be eaten raw in salads and coleslaws. Locally, it is popular pickled, boiled in soups, steamboat or hotpot, stir-fried or steamed; lending sweetness, a mild flavour and a little bit of crunch from the leaf stalks, to dishes.


Chinese cabbage prefers cool temperatures, full sun and plenty of regular watering to grow well and reach maturity. Thus, it is not a crop for the tropics. From seed to harvest most varieties from (1) and (2) take about 10 weeks while the loose head varieties can be quicker, taking between four to five weeks.

Caisin is cultivated as a leafy vegetable. It is suggested to have originated from China. In our local markets it goes by a few common names including cai xin and choy sum or choi sum. It has a stout, thick stem. Oval shaped leaves with a fine-toothed edge (especially when young) grow on the ends of long, bright green leaf stalks. Some varieties like Kosaitai, sport purple stems, leaf stalks and leaf veins with dark green leaves – this means it is both ornamental and edible!

The caisin produces bunches of small golden flowers that appear rather luminescent against the darker green leaves. This beautiful contrast is why it is sometimes also grown as an ornamental in gardens. As a vegetable, the caisin is usually allowed to bolt and harvested just as the first few buds open (yu choy sum) but can also be harvested younger and without flower buds present (yu choy).


Caisin prefers full sun and regular watering. Most varieties do well in the tropics, but some prefer cooler temperate climates. It is fast growing; from seed to harvest, most varieties take between four tos even weeks.

The caisin tastes sweet with light bitter undertones. When cooked for a short time, the stalks retain a certain degree of crispness and stems are tender and succulent, much like kalian (Brassica oleraceae). Caisin is a common vegetable in Chinese cuisine and can be steamed, boiled in soups, pickled or stir fried. 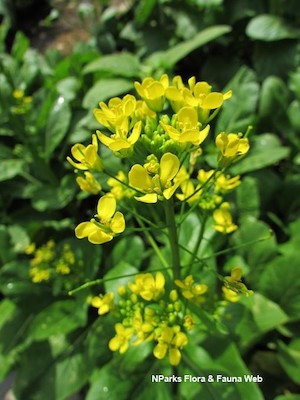 (Left) The bright yellow flowers of the Caisin and (right) Caisin grown locally ready for harvest.

Growing Tips
Overall, Brassica rapa vegetables are fast and easy to grow. It is a great starter plant for those wanting to begin their edible gardening journey. It can be grown to full size or even enjoyed as microgreens. To keep pests away, gardeners might consider planting Brassica rapa under a fine mesh netted frame to let in sun and water but keeps bugs away.

The species is the plant equivalent of the dog and is a great example of how humans have domesticated a plant, resulting in its many different shapes, colours and tastes.

Gardening with Edibles
The City in Nature vision seeks to bring greenery closer to all residents. The community plays a key role in the ownership and stewardship for nature which will benefit our health and well-being.

NParks is partnering residents to make Singapore our City in Nature and spark a love for community gardening through the Gardening with Edibles initiative launched in June 2020. Under this programme, some 400,000 free seed packets have been distributed to interested members of the public. Relevant resources are also available online, to guide gardeners along the way.

Also, NParks is expanding the allotment gardening scheme and the Community in Bloom programme, to welcome even more residents into the gardening family.

The Gardening with Edibles initiative is aligned with Singapore’s national strategy to strengthen our food resislience. The “30 by 30” goal, led by the Singapore Food Agency, aims to produce 30% of Singapore’s nutritional needs locally by the year 2030. The programme is jointly funded by founding partners DBS Bank and Tote Board through the Garden City Fund.

Learning More
If you are a gardening newbie, visit NParksSG, our refreshed YouTube Channel that serves as a one-stop repository for close to 300 video resources. It covers topics ranging from types of soil needed for your garden and how to plant, harvest and even cook your edibles.