In recent weeks, Singapore has been covered in a riot of colour from the many blooming flowers on shrubs and trees along our roadsides, parks and gardens. 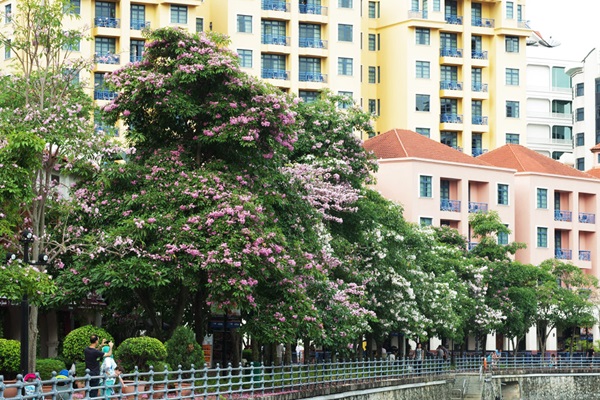 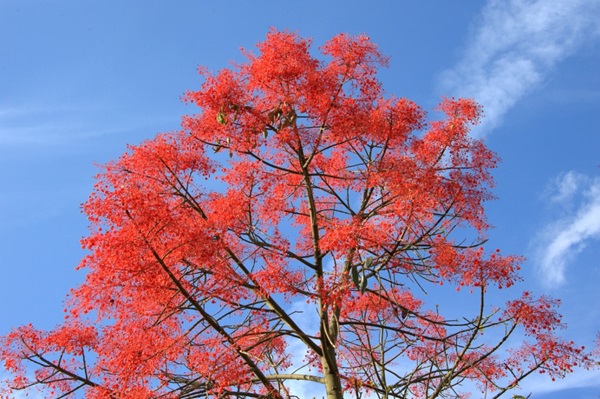 Along Jurong West Street 93, an Australian Flame Tree (Brachychiton acerifolius) lives up to its name. Like many of the plants that flowered in the same period, its blooms were very likely induced by the longest dry spell in Singapore’s history and the rains that followed after. According to Oh Cheow Sheng, Director of Streetscape at NParks, some plants require “stimulation of light and temperature to produce flowers. Environmental conditions such as the recent rain and dry spell could have triggered the mass flowering.”

The duration of the flowering varies from plant to plant. For example, the flowering period of the bright-yellow Cat’s Claw Ivy (Macfadyena unguis-cati), such as these lining Havelock Road, lasts about one to two weeks. 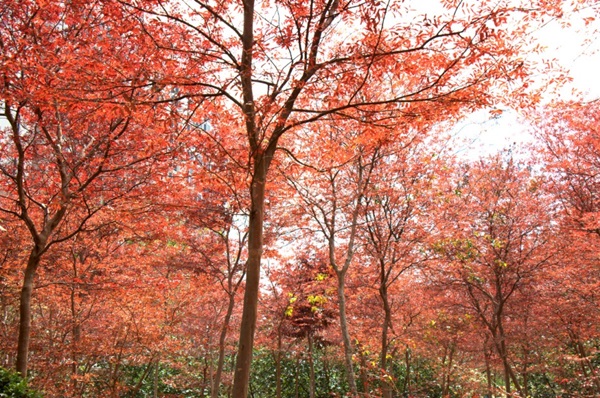 However, it’s not just flowers that have been painting the streets in hues of reds and yellows. Spotted near Havelock Road were these Tropical Cape Mrytle (Lagerstroemiafloribunda Jack) with their coppery red young foliage.

Seems like autumn in Singapore, doesn’t it? Even fruit trees have gotten into the act, like these Mango (Mangifera indica) trees along Boon Lay Way. If you stare hard enough, you might be able to spot the fruits in between the flowers!

So keep a look out for flowering plants as you travel along our roads or visit any park or garden. What stunning blooms! Earlier this month, the Mexican Lilac (Gliridicia sepium)along Leedon Park were blooming profusely. This past week, there have been masses of yellow blooms on the Golden Penda (Xanthostemon chrysanthus) in the vicinity of SMU and along other roads. A sight to behold!

My friends and I live around the Pandan Valley/Mt Sinai Rd area and we are blessed with spectacular views of the Trumpet tree blossoms. We often post our pics on Facebook. Kudos to our NParks for planting these and other beautiful flowering trees! We hope you will increase the number as it is such a lovely sight to drive through a street lined with these magnificent blooms. We appreciate that it is extra work to clean up the fallen flowers - but it's worth it. These flowering trees make a huge impact on our urbanised island with its concrete jungle. Thank you for helping our island look like a tropical resort!

My question to NPark is not related to said flowers but about lotus ponds in Singapore. Beside Bishan park and the park beside KK Hospital, where else I can find them? Hope to hear your reply soon as this is the season when lotus blooms.

Hi Jie Lin, Some of the other places you can find lotus plants include Singapore Botanic Gardens, Punggol Point Park, Toa Payoh Town Park and Gardens by the Bay.

I loved to see the recent changes in Singapore esp every time when we drive along the Boon Lay Way, we are greatly delighted to see the Australian Flame trees blossom beside. We hope that NEA can plant more flowering trees along the roads that lift up the this little red dot which named as Flower City. Great job!