Wispy Silhouette by the Coast

The Casuarina (Casuarina equisetifolia), also locally known as Rhu in Malay, is one of the trees close to my heart. Native to Singapore and found throughout Southeast Asia, Australia and the Pacific Islands, it is often found growing wild along sandy coasts.

I remember fondly the clump of Casuarinas in West Coast Park (Campsite Area 3), where my family would visit often during my primary school days. We spent many weekends picnicking in the area. I would laze under the shade of the trees, reading a book, or simply taking in the sea view while enjoying the breeze. A row of Casuarinas providing shade in West Coast Park

When the wind blew, the gentle rustling of the tree’s needle-like twigs soothed me. My father showed me the joints on the fresh green needles, and I was highly intrigued – it seemed as if each needle could be pulled apart and put together again at the joints! I would bundle up the dried needles, pretending I was starting a fire with them. Looking back, I had thought the needles to be the leaves of the tree; now I know better, that the true leaves of the Casuarina are actually very tiny pointed scales around the joints on each twig.

The tree’s wispy, slightly conical form reminded me of pine trees, which I also have a soft spot for. Actually, the Casuarina is completely unrelated to pines and other coniferous trees, as it is an angiosperm (flowering plant). However, it is evergreen like pines. Its generic name, Casuarina, means “cassowary-like” in Latin, as the branches resemble the feathers of the Cassowary (Cassuarius cassuarius). 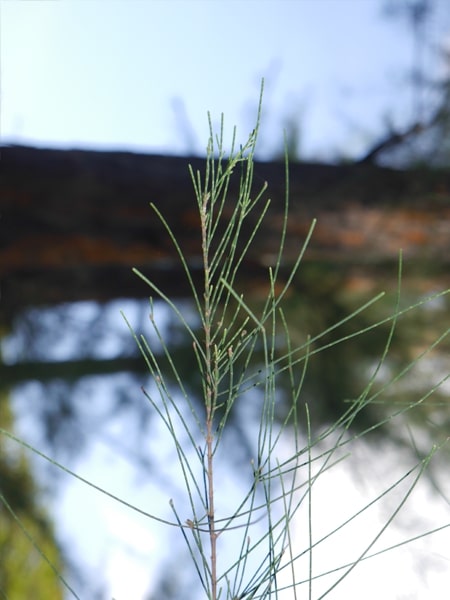 The light coloured “band” on each green twig actually comprises the leaves of the Casuarina.

Mini “Durians” All Around

I had fun gathering the fruit of the Casuarina as well, which I thought closely resemble cute little durians! Each is a spiky cone-like cluster that contains small, flattened winged seeds, which are dispersed when the “spikes” split as the fruit ripens. 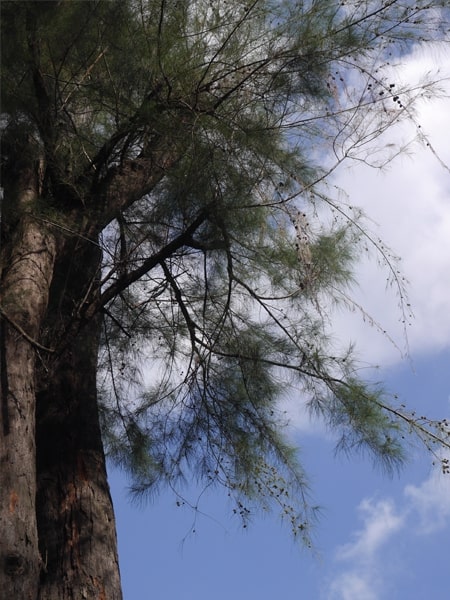 Casuarina fruit dot the branches of the tree. The fruit with its “spikes” all split.

Sadly, I have never seen for myself how the seeds look like, and neither have I caught the Casuarina in flower. It is said that the Scaly-breasted Munia (Lonchura punctulata) feeds on Casuarina seeds; I did spot the occasional Plantain Squirrel, which also feeds on fruits and seeds, scrabbling on the trunk of the Casuarina. 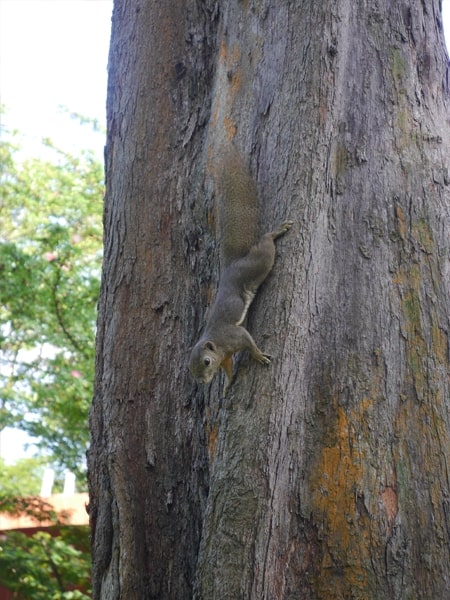 A Plantain Squirrel, almost perfectly camouflaged against the trunk of the Casuarina

It makes me even happier that this tree not only looks lovely, but it also plays an important role in “protecting” its habitat. Tolerant of salt and poor soil, the Casuarina grows fast along sandy coasts and coastal forests. Its roots hold the soil together and the tree serves as a windbreak, thus mitigating coastal erosion. It also helps to improve soil quality as its roots form associations with soil micro-organisms that are able to fix nitrogen from the air.

Knowing all these, I look forward to bringing my children to relax under the Casuarinas in future. I hope they too will share my love for these and other trees around us.

Get up close and personal with some of the trees on our island by going on a walking or cycling trail in our parks, gardens and park connectors. Besides admiring the trees, you can also potentially spot biodiversity. Learn more about going on a DIY walk.

Text and photos by Victoria Cheong