Every year, millions of migratory shorebirds escape the harsh winters in the north by braving an arduous journey southward to roost and feed. The routes taken by these birds are known as flyways and Sungei Buloh Wetland Reserve is situated along one of the world's greatest, spanning from Russian Far East and Alaska to Australia and New Zealand.

Our mudflats are full of life, if only you know how to spot them! Masters of disguise, these creatures camouflage with their surroundings and it often takes patience and a keen pair of eyes to spot the inhabitants of the mudflats.

These organisms help to maintain the health of the mud and are also an important source of food for animals higher up in the food chain. Get up close to these mud-dwellers during low-tide at the Mud Experience or simply try to spot them at the Mangrove Boardwalk in the Reserve! Can you spot the two baby horseshoe crabs? Hint: they are at the upper right and lower left of the picture.

Have you seen a living fossil? Horseshoe crabs are akin to one as they have lived for more than 450 million years without changes in its physical appearance or characteristics! The tree-climbing crab has a characteristic square-shaped body that is different from most crabs.

The unique tree-climbing crab (Episesarma sp.) can be spotted during high tide when it climbs up trees to escape from predators in the water. However, once out of the water, it often remains motionless to avoid being eaten by kingfishers and monitor lizards. During low tide, it can be found hiding in burrows at the bottom of trees or foraging for food in the mud at the Mangrove Boardwalk. 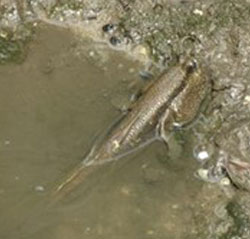 A giant mudskipper at the entrance of its home.

If you see a creature resembling a tadpole dragging itself onto the mud, chances are that you have found a mudskipper!

The giant mudskipper (Periophthalmodon schlosseri) is the largest of its kind in Singapore and is identified by two black lines that run along the sides of its body. The mudskipper is an amphibious fish that can survive on both land and water by holding water in its enlarged gill chambers when it is on land.

It can usually be found resting on mangrove roots during high tide but at low tide, look for it near pools of water which are actually entrances to its underground home. Polychaetes, also known as bristleworms, can be found in the mud and are important health indicators of the mud. Most of them are marine animals. Some are predatory, while others feed on algae or water-borne particles. The Reserve is home to worms such as the tube worm, ribbon worm and peanut worm. Certain species can be poisonous or have sharp bristles, so please refrain from touching them if you see them! The largest gastropod in Sungei Buloh Wetland Reserve, the telescope snail (Telescopium telescopium) has a distinctive spiral-shaped shell. Despite its large size, it is a herbivore that feeds on algae. It is often seen in large numbers on the mudflat. See if you can spot the tracks left behind by these snails!

With scales instead of fur, these animals are cold-blooded, which means that they are unable to maintain a constant body temperature. This physiology allows them to save energy on producing heat and hence, they do not have to eat as regularly as us. To increase their metabolism rate, they will bask in the sun. Therefore, when the sun is out, make sure to keep an eye out for them! The dog-faced water snake (Cerberus schneiderii) gets its common name due to its bulging eyes which is a trait rarely seen in other snake species. Although commonly found in mangroves, it is rather difficult to spot due to its shy nature and its ability to camouflage in the mud. Unlike other snakes, the dog-faced water snake gives birth to live young instead of laying eggs! The king cobra (Ophiophagus hannah) is listed as vulnerable to extinction under the IUCN Red List. Although venomous, it is actually a shy snake that avoids humans. It would rather flee than attack, unless it is provoked or cornered. It feeds on other snakes and is thus aptly named “king”. If you see one, keep a safe distance and do not approach it! The Malayan water monitor (Varanus salvator) is one of the largest lizard species, second only to the komodo dragon. It can grow up to 3 m long. It is a carnivorous scavenger that tends to stay close to waterbodies. Although it mainly stays on land, it can climb trees and is also a good swimmer. When you are at the Reserve, you are sure to find it swimming lazily in the water, sunbathing on the banks, or even sleeping on trees. 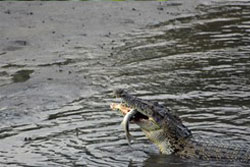 Sometimes mistaken for a water monitor lizard, the estuarine crocodile (Crocodylus porosus) can be seen in the Reserve. It can be found basking on land when it is sunny or floating on the surface of the water with only its eyes and snout peeking above the surface. As an apex predator, its presence in Sungei Buloh indicates a healthy ecosystem.

While it is a sight to see, if you encounter a crocodile, please keep your distance and stay away from the water’s edge.

If you are in the Reserve during low tide, keep a lookout for one of our resident crocodile, named Tail-less due to the absence of a tail!

Learn about the differences between a Malayan water monitor and an estuarine crocodile here.

There are many species of birds that can be spotted around Sungei Buloh Wetland Reserve. If you walk down any of the trails, you will be able to hear and see them. The best time to see our resident birds is during early mornings.

The male pink-necked green pigeon (Treron vernans) looks like it comes right out of a colouring book! It sports many colours compared to the regular rock pigeon we can see in urbanised areas. Like many other species of animals, it is sexually dimorphic, meaning that the males and females have distinctively different characteristics. The male pink-necked green pigeon is more colourful than the female which is mostly green.
2) Stork-billed Kingfisher 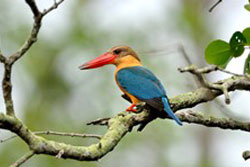 The stork-billed kingfisher (Pelargopsis capensis) can be found near waterbodies and has characteristic blue wings, brown crown and an orange body. Its beak has a unique shape to help it dig its nest in river banks or in decaying trees.

Learn more about the different kingfishers you can find in Singapore here. A pair of female (left) and male (right) common flameback on a tree.

Do not be alarmed if you hear a loud tapping in the forest! These are most likely caused by the different woodpeckers that reside in the Reserve. The common flameback (Dinopium javanense) is one of them. It taps on tree trunks to forage for bugs, and the male is easily identified by the red crown on its head. 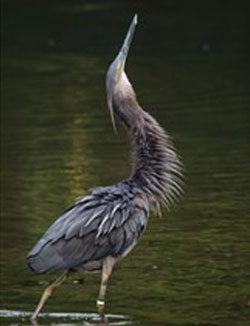 Standing at an average height of 1.15 m with some reaching nearly 1.2 m, the great-billed heron (Ardea sumatrana) is the largest in Singapore. Unlike other resident herons, it is usually solitary. It can be spotted along the mudflats, identified by its dusky grey plumage.

Dragonflies are predatory insects and are usually found near or hovering over the waters of our freshwater ponds. This is because they lay their eggs in water or on the aquatic plants. These eggs hatch into dragonfly nymphs, which feed on small fishes, mosquito larvae and sometimes, each other. Although our modern day dragonflies are small, prehistoric dragonflies have wing spans of 60 cm! When you head down to the Junior Wetland Trail and the Dragonfly Pod, be sure to spot these beautiful insects! 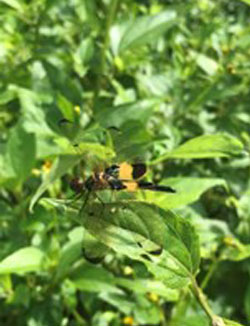 A distinctive-looking dragonfly, the yellow-barred flutterer (Rhyothemis phyllis) gets its common name from the yellow bar found on its hindwing. It is commonly found near open freshwater ponds and can sometimes be seen swarming when there is a presence of high abundance of prey such as small insects. Commonly seen in throughout Singapore, the common parasol (Neurothemis fluctuans) is one of the most outstanding species with its reddish-coloured wings. It is sexually dimorphic, with the male having maroon-coloured wings while the female has clear wings. You can usually get up close to take a better look at it without scaring it off.

Learn how to tell the difference between dragonflies and damselflies here.

Volunteers are truly gems; from conducting workshops and guided tours to helping out with conservation surveys, Sungei Buloh Wetland Reserve will not be where it is today without the help and contributions of volunteers. Click here to join in our conservation efforts, or find out more about other volunteering opportunities here.

Jacqueline Choo is a second-year Environmental studies undergraduate from the National University of Singapore. As part of her internship program, she was attached to NPark’s Conservation department in Sungei Buloh for three months. She participated in the Festival of Biodiversity, Benthic lab specimens sorting, and assisted in literature review.

Heather Tay is a third-year Life Sciences undergraduate from the National University of Singapore. As part of her summer internship program, she was attached to NPark’s Conservation department, under the Sungei Buloh Wetland Reserve, for 10 weeks. She assisted in various surveys and projects that Sungei Buloh conducts, such as insect surveys and Benthic Lab sessions. She also participated in the Festival of Biodiversity.