Discover the Many Uses of the Roselle Plant!

The roselle plant is well known for its fleshy calyces that are used to make a beverage that tastes like Ribena. The drink reportedly possesses anti-hypertensive, diuretic and mild laxative properties, and contains abundant amounts of natural antioxidants such as vitamin C and anthocyanins.

Either fresh roselle or dried calyces are used to make the drink. They are first boiled in water to yield a deep-red and sour beverage, which is then sweetened with sugar and chilled in a refrigerator before serving.

Besides producing calyces for making drinks, the roselle plant has a stem that is laden with calcyes at every node. This can be turned into an alternative cut-flower material for flower arrangements, after the removal of its leaves.

Also, did you know that the young leaves and tender shoots of the roselle plant are edible? They can be eaten raw in salads or cooked as greens either on their own, or with other leafy vegetables and meat. The stems of the roselle plant also yield a fibre that can be used as a substitute for jute in making burlaps.

The roselle plant is easily raised from seeds or stem-cuttings, and is best grown using well-drained, fertile soil. It can be planted outdoors in the ground or inside a container placed on a windowsill or balcony, as long as the plant receives direct sunshine for at least six hours daily. Fertilise regularly with granular fertiliser to encourage vigorous growth and generous production of calcyes at maturity.

If you were wondering what calyces are (singular – calyx), well, they refer to the collection of sepals behind the petals of a flower. Sepals in most flowering plants are leafy and green, forming the outer protective covering of a flower bud.

Botanically known as Hibiscus sabdariffa, the roselle plant is a member of the hibiscus family, Malvaceae. The plant is a shrub that produces numerous attractive, pink-coloured hibiscus-like flowers, with a distinctive eye in the centre. 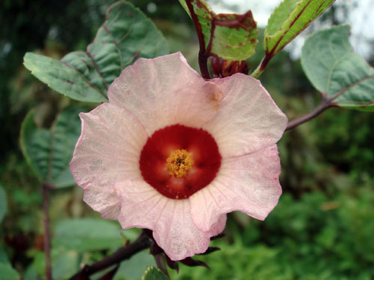 The pink flower of the roselle plant that looks like a small hibiscus.

A stem with calyces on it makes an attractive cut-flower material for flower arranging. 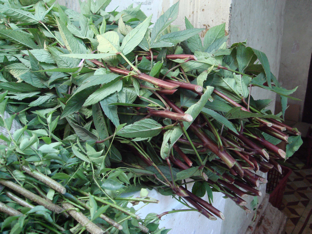 Cut portions of roselle plants are sold as a leafy vegetable in Little India.

Hi Jasmine, Perhaps the nursery people you spoke to are not familiar with the English name of the plant. Many nursery workers call the plant "Ribena Plant". At the same time, it's easier to obtain the plant than the seeds. We only know of one place - Oh's Farm at Bah Soon Pah Road - that collects and packs their own seeds for sale. You could check with them on purchasing the seeds.

Where can I purchase a pot of this roselle plant?

Hi Raina, The plant you are looking for is the <em>Gynura procumbens</em>, also known as the Longevity Spinach or Cholesterol Spinach. It may be found at some of the nurseries which stock local plants, for example <a href="http://www.huahng.com.sg/" title="World Farm" rel="nofollow">World Farm</a>. The plant is frequently grown in community gardens, so if you know of one in your neighbourhood, you can check if they have the plant and whether they are willing to share with you some seedlings.

Hi Jasmin. I have a few Rosella seedlings,mail me if you wish to have them.

I am now growing Roselle plant and enjoying collecting calyces to make juice drinks and jams.I really love the jam much more the juice drinks,taste like cranberry juice.Love it!

Thank you for your interesting article. I was given seeds of the roselle plant 10 days ago and I potted them. After 1 day, they germinated and sprouted. Now they have grown so tall that the fine stems can't support the 2 leaves and kept falling down. What will happen next? Will there be more leaves? They look like skinny "tau-gay" that have sported. Don't like anything like the roselle plant. Pl advise. Thank you.

I want to clarify if this rosselle plant is the same with our locally known "Labug" in Tapaz, Capiz? We love this plant so much. we use this in Chicken Tinola, Sinigang na Fish and many dishes.

Hi Chiew Wan, It appears your plant lacks sufficient sunlight. Roselle is a plant that requires direct sunlight to grow well. It can grow outdoors under full sun all day - it doesn't require shade. If grown inside an apartment, Roselle will require at least 4 hours of direct sunlight in order to thrive, otherwise it will stretch and appear as you have described. In the long run, if the plant doesn't get sufficient sunlight, it will grow weaker.

Thank you for your interesting article. I was given some Roselle seeds to grow. I was happy to see it sprout quite quickly after 1 day. since then it has been growing taller and taller with just 2 leaves. Because of the height, the plantlet is unable to support it own weight. It really looks like a long bean sprout. Is there any thing I can do? Will more leaves be sprouting? It is about 10 days now.

Hi, I am looking for a plant called " Guynura Procombens ". Where can I find it in Singapore? The nurseries where I tried nobody seems to have heard of it. What is the Chinese name of this plant? If anybody has this plant, please share the information. Thanks

Where can I buy the buds of the tree in order to made drink...hope you could list me a few places to purchase.

Hi Ismail, We are pleased to hear you are attempting to grow your own roselle. We hope your plant continues to do well. All the best!

I was given some roselle seeds. Have watered the plant everyday and placed it in a warm area at my balcony. It has been two weeks but it is not germinating. Should I give up or is there a way to salvage? Thanks.

Yes more leaves will sprout and then the buds. In our country it only bud for us to have it at Christmas. It makes a delicious drink when it is made with ginger. It is known to us as SORREL.

Just wondering if any kind souls will be willing to share some seeds with me. I called up some nurseries but they don't seem to have it, either that or the person I was talking to have no idea what I was talking about.. :/

You can find it at Bishan St 11, Block 151A wet market. This veg store sells interesting range of veg which include organics veg (at very cheap price), Thai brinjal/ lime, courgettes, Roselle, Chinese herbs, etc. The store is facing the main road.

I am a begginer ie i planted the seeds 4 months ago, the plant is growing , and is still under observation.

Hi Michael, Most nurseries sell Roselle plants. Just note that sometimes the employees refer to the plant as Ribena.