An Enchanted Evening With Andrea Bocelli

As dusk fell on 8 May 2010, the resident birds of the Singapore Botanic Gardens were joined in song by a star-studded lineup of human vocalists. The occasion was the YTL Concert of Celebration 2010, and the headline performer was Andrea Bocelli, world-renowned Italian tenor.

Cheers and applause rang through Swan Lake and Palm Valley when conductor Eugene Kohn from Singapore’s Philharmonic Orchestra led Bocelli onstage. The distinguished tenor opened the concert with his rendition of a classical opera piece, La Donna È Mobile from Verdi’s Rigoletto. The maestro’s captivating voice was backed up effectively and skillfully by the local orchestra – together with other unexpected accompanists. Crickets in the gardens contributed their chirps, complementing the concert with a touch of nature’s harmonies.

As the music flowed on, Signor Bocelli was joined by special guests: Australian pop singer Delta Goodrem, Slovenian soprano Sabina Cvilak and acclaimed flutist Andrea Griminelli. Bocelli, who is known for his chemistry-infused collaborations, drew much roaring applause with these performances.

The audience responded with the most enthuasiasm for the tenor’s signature piece, Con Te Partiro (With You I Will Leave). This song is better known as Time to Say Goodbye; many are familiar with the chart-topping version he sang with Sarah Brightman.

At this concert, Bocelli performed the duet with Delta Goodrem, their voices melding in a delightful crossover of classical and pop music. The duo also sang contemporary pieces such as Can’t Help Falling in Love and The Prayer. These crowd-pleasers had the audience (including this writer) humming along to Goodrem’s dulcet tones and Bocelli’s deep vocals.

There was little banter between Bocelli and the audience. He did, however, say a few words while introducing the song ‘Mamma’, dedicating it to all the mothers present since the next day was Mothers’ Day.

The heavy downpour before the concert might have doused the concert venue, but it failed to dampen the concertgoers’ high spirits. Temperatures were likewise kept high with the audience’s enthusiasm. Some found it a little too hot to handle, and received welcome respite from the plastic fans found in their goodie bags, given out by the thoughtful concert organiser.

Shouts of “Bravo!” were heard throughout the concert, from the diverse audience that comprised young and old alike. The loudest cheers of all came from YTL’s Managing Director, Mr Francis Yeoh.

Celine Lim, 25, and Gary Tan, 28, were among the 4,200 lucky ticketholders who had entry to the concert’s seating area. The couple found the outdoor concert a unique experience, unlike conventional indoor performances in concert halls. While they admitted that they were not fans of opera music, they thoroughly enjoyed the pieces performed by Bocelli. “We would definitely look forward to more of these concerts in the parks!” said Gary.

As the melodious evening drew to a close, the concertgoers lingered to watch the dramatic finale – a 10-minute display of dazzling fireworks, lighting up the sky above the Swan Lake in a flashing myriad of brilliant colours. 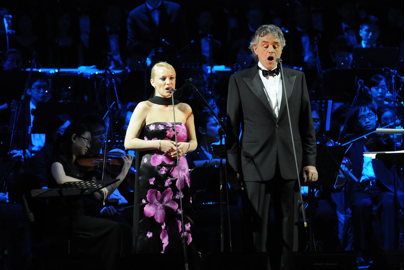 Bocelli’s duets with Australian songstress Delta Goodrem delighted the audience with their melding of classical and pop styles. Bocelli, who was born blind, kept his eyes closed throughout the performance – reaching out to the audience with the sheer depth of his vocals. 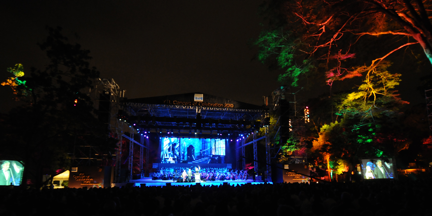 The venue placed the outstanding performance against a backdrop of nature’s beauty. Even the crickets of the forest couldn’t help but chirp along. 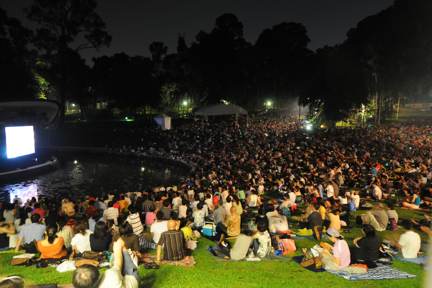 Besides the lucky concertgoers who had tickets to the seated area, many others managed to enjoy the performance at the Swan Lake, as the concert was broadcast onto large screens there.