How To Mulch Your Trees & Shrubs

Mulch applied around the base of plants can help to suppress the occurrence of weeds.

When out and about in our parks and gardens, you may have noticed a ring of black organic material around the bases of trees and shrubs. Though it may not look as interesting as the plant it surrounds, this ring of mulch is actually very beneficial to plants.

Known as groundcover mulch, this ring of material mimics the layer of dead leaves found at the bases of plants in their natural environment, such as in the forest. This groundcover mulch performs many functions. It protects plant roots against drying out, suppresses the growth of weeds, reduces soil erosion and soil compaction, and gradually releases nutrients as it breaks down.

When used correctly, this type of mulch can enhance the attractiveness of a landscape planting. Its presence also protects plants from damage during grass-cutting, as it acts as a physical barrier against lawn mowers and weed trimmers.

You can make your own groundcover mulch from composted wood chips, with a size ranging from 1.5 to 3 cm in diameter. Other organic materials used to mulch plants include: dried leaves, sawdust and grass clippings. Do note though that, when these mulch materials break down with time, they may release growth-inhibiting substances (called phytotoxins) and rob the soil and plant of nutrients such as nitrogen. In some cases, heat is generated during the breaking process, which can be harmful to plant roots. To avoid these problems, compost all materials fully in a corner of the garden before using them.

We do not recommend using fine compost material as mulch. These have very poor aeration and will remain wet for long periods, causing many problems, such as crown and rot diseases. Also, fine material can be easily washed away during rainy weather.

The mulch applied around the base of a tree should be 10 cm thick at most. Leave a gap of at least 15 cm between the mulch and the tree’s base: this will prevent rotting and insect attack caused by perpetual contact with moisture in the mulch.

For best results, extend the mulched area until the tree’s dripline, which is the area directly under the outer circumference of the tree branches. In this zone, tiny rootlets are located, which take up water for the tree. 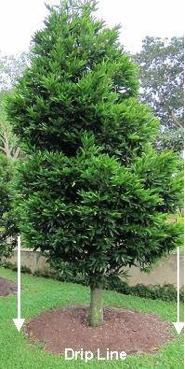 The drip line of the tree refers to the line around a plant, directly under the tips of its outermost leaves.

For shrubs and smaller plants in flowerbeds, the same principle applies, except that they require a thinner layer of mulch as compared to trees. Do ensure that none of the shrubs’ leaves or stems are touching the mulch material, to prevent them from rotting. A mulch layer at the base of these plants will reduce the likelihood of soil splashes on their leaves during the rainy season – such soil splashes can cause plants to look unsightly, and raise the incidence of foliar fungal diseases. 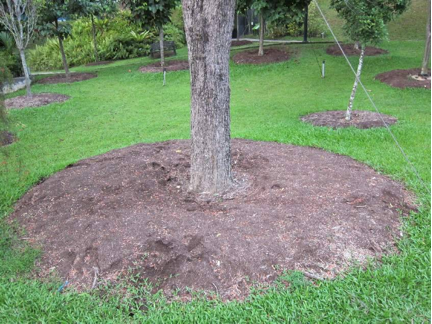 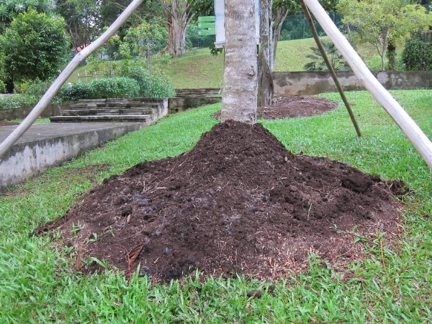 Never create ‘mulch volcano’ around the plant base.