The knobbly sea star has knobs on its dorsal (upper side) surface that look like chocolate chips.

Standing from a distance, perhaps from the shore or on a boat, the busy waters surrounding Singapore look murky and empty of marine life. However, the reality is far from that.

The intertidal area exposed during low tides, for instance,is home to many interesting species of animals if you know when and where to look. I tend to spot more animals on the intertidal areas during predawn low spring tides.

A star in the sea
Crabs, shrimps, sponges, and sea anemones are the usual ones I find, while sometimes I am extremely delightful to spot a seahorse, cuttlefish or octopus. My favourite, however, are sea stars – some people call them starfish, but they are not fish!

Sea stars are relatives of sea cucumbers and sea urchins. They belong to the phylum Echinodermata, which means ‘spiny skin’ in Greek. There are at least 31 species of sea stars in Singapore’s waters. The Knobbly Sea Star (Protoreaster nodosus) is one iconic species that I find particularly attractive. They have been recorded at intertidal habitats of Chek Jawa, Cyrene Reef, Beting Bronok (to the north of Pulau Tekong) and Changi Beach. 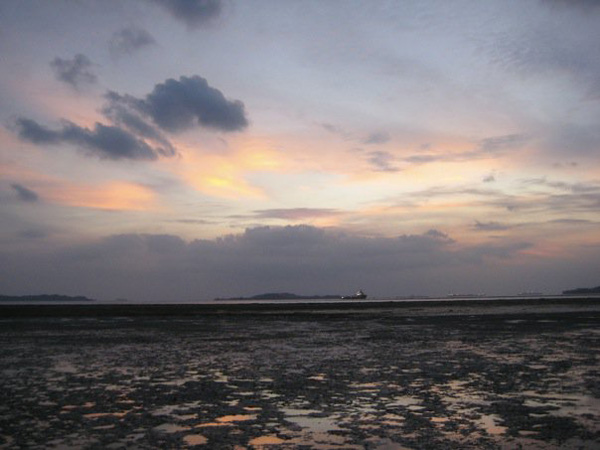 An intertidal area exposed by the low tide at Pulau Semakau, one of the places where Knobbly Sea Stars can be found in Singapore.

The Knobbly Sea Star is one of Singapore’s largest sea stars. Individuals of up to 35 cm in diameter (that is larger than most of faces) have been recorded locally! The Knobbly Sea Star, also known as the Chocolate Chip Sea Star, is characterised by dark brown knobs that look like chocolate chips on its body and arms. Individual sea stars can be recognised by the number and arrangement of the knobs, just like our fingerprints. The number and arrangement of knobs differ between individuals.

Sea stars have an interesting way of feeding. Their stomachs evert from their mouths, located at the centre of their undersides, and digest the food outside their bodies. The Knobbly Sea Star feeds on anything it can find, such as microbial films on seagrass and dead animals. I have even spotted them feeding on other sea stars too!

The ventral (underside) of a Knobbly Sea Star, showing the mouth at the centre.

Knobbly Sea Stars are no longer as common as they used to be in Singapore. They have been classified as Endangered in the Singapore Red Data Book.

Knobbly Sea Stars are largely threatened by the loss of reef flats and seagrass habitats, as well as ongoing coastal development, such as land reclamation and dredging, in our local waters. They have also been collected for the aquarium trade or dried and sold as collector’s items. While these stars look lovely in our aquarium tanks, they do not thrive well in captivity without expert care.

Trampling by visitors to the shores can also affect their survival. Let us be mindful of our actions and conserve these sea stars and their habitats so that we can continue to see them in our sea!

Glossary:
Evert: Turn an organ or a structure inside out Intertidal: Area that is covered at high tide and uncovered at low tide Microbial films: Communities of microorganisms attached to surfaces