Heron Vs Stork: Telling Them Apart

Heron and stork populations are well-distributed across the world, with the exception of the Arctic regions where living conditions are extreme. In Singapore, there is an overlap of migratory and residential populations belonging to the different species of both families.

Members of the Ardeidae family in Singapore are considerably more diverse than those of the Ciconiidae family found here. Aside from the distinctly-coloured Grey and Purple Herons, the familiar white egrets populating our canals and open fields also fall under the same heron family. A more elusive member of the family — the bitterns — would hunt for food around the tall reeds that surround ponds.

Birds belonging to both these families are characterised by similar physical features such as long necks, bills and legs. They are also much larger than the commonly-seen garden birds. Do not bother listening out for their calls for these birds are largely silent unless alarmed. Being carnivorous, they feed on a plethora of animals including fish, crustaceans, reptiles and rodents.

Given the morphological similarities between storks and herons, it is understandably difficult to distinguish between them. However, their bills, plumages, flight stances and habitats might just give you a clue on their identity! 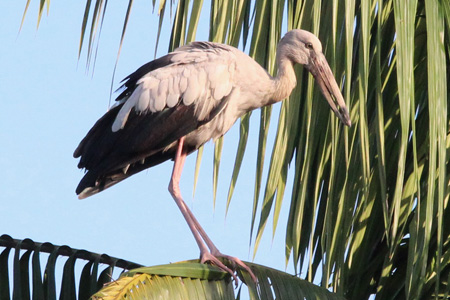 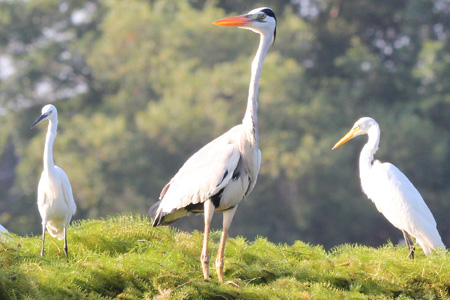 (Left to Right): Little Egret (Egretta garzetta), Grey Heron (Ardea cinerea) and Intermediate Egret (Egretta intermedia)
Photo credit: Tan Rui Siang
Storks tend to have much larger bills compared to members of the heron family. Storks’ bills are also thicker and stouter and tend to curve up or down near the tip. Meanwhile, herons tend to have smaller, dagger-shaped bills that taper near the tip.

Not surprisingly, the bill shapes of these birds are adapted to match their diet! For example, storks like the Asian Openbill Stork have bills that maintain a gap when closed, making it easier for them to extract their favourite meal, the golden apple snail, from their shells. In comparison, herons and bitterns use their bills as spears—rapidly striking fish swimming by. 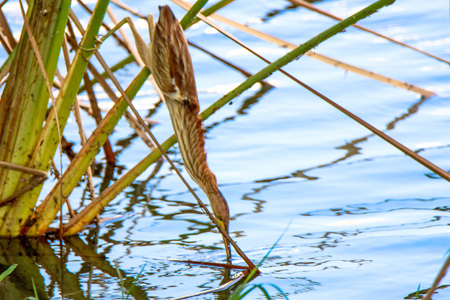 While birds from both families can be found near freshwater and coastal environments, storks are more likely to be found nesting on trees and feeding openly in fields and marshes. This is also true for most herons and egrets of the Ardeidae family.

Bitterns, however, prefer to keep a low profile by hiding among reed beds that are found in well-vegetated water bodies. When alarmed, they adopt a “bittern-stance” by stretching their neck and head skywards. This helps them get a better sense of potential threats lurking in the sky and in front of them, while keeping them well-camouflaged amongst tall reeds. Remaining well-hidden in reeds also allow them to ambush prey more easily. 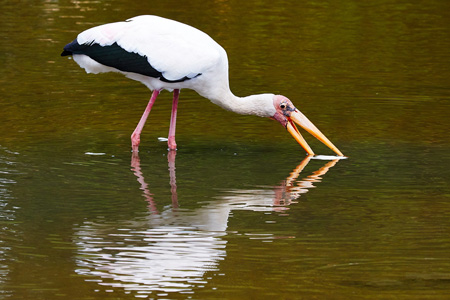 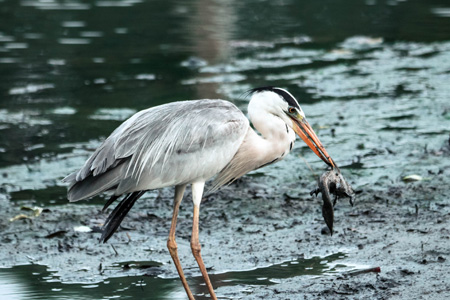 If you ever get a chance to catch these large wading birds in the act of predation, you may notice the differences in the way they forage for food.

Storks are relatively more active hunters than herons. Milky Storks (Mycteria cinerea), one of the three species of storks observed in Singapore, adopt the groping method as they hunt for their prey. They wade through shallow waters with their open bills submerged beneath the water surface, groping for fishes and frogs. The bills then snap shut when unfortunate prey makes contact with it, and the stork’s meal is then tossed into its mouth with a flick of its head!

Meanwhile, herons usually settle motionlessly along the water’s edge for a long time as they wait for an opportune moment to strike unsuspecting fish with their dagger-like bills. Eastern Cattle Egrets (Bubulcus coromandus) are also opportunistic predators and are known to dwell near grazing ruminants who may flush out insects for them to snag.

Necks in Flight: The Determining Factor 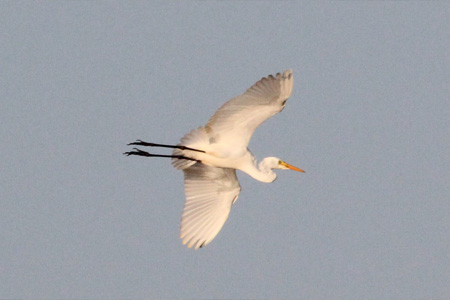 Are the subtle morphological differences between herons and storks still befuddling you? The surest way to tell storks apart from herons and their counterparts is from their flight stances.

Storks fly with their necks fully extended, while herons always retract their necks into a characteristic “S” shape while in flight. However, the retracted “S” shaped neck is more pronounced and noticeable in larger heron species than those of bitterns and smaller herons like the Striated Heron (Butorides striata) and Pond Herons (Ardeola sp.). These species tend to possess fluffy neck feathers that conceal their necks!

Want to learn more about herons, egrets and bitterns? During this stay at home period, you can do so even without leaving your house! Learn more through our interactive e-learning module, accessible via Chrome, Apple Safari or Mozilla Firefox browser on desktops or laptops.

Benedict Ling is a final year Life Sciences undergraduate from the National University of Singapore. He is currently undergoing a 6-month internship with NParks for his Final Year Internship project. While being attached to the Biodiversity Information and Policy branch in the National Biodiversity Centre, he assisted in the organisation of Heron Watch and the Biodiversity Week for Schools programme. His passion for ecological fieldwork and interest in spreading the word about our local biodiversity led him to choose NParks as his organisation of choice for his internship.