Stories Behind Our New Heritage Trees

Mature trees serve as important green landmarks of Singapore, an integral part of our natural heritage. These trees help us to identify with, and stay rooted to, the place we call home.

The Heritage Tree Scheme, announced in 2001, advocates the conservation of Singapore’s mature trees. The Hongkong and Shanghai Banking Corporation Limited (HSBC) established the Heritage Tree Fund then, to kick-start a conservation programme that safeguards and promotes the appreciation of these trees. To date, more than 250 trees have been accorded this Heritage Tree status.

Even as we stay indoors right now, you can get to know these eight ‘new’ mature trees, added to this list during the 2019 Heritage Tree Scheme cycle. 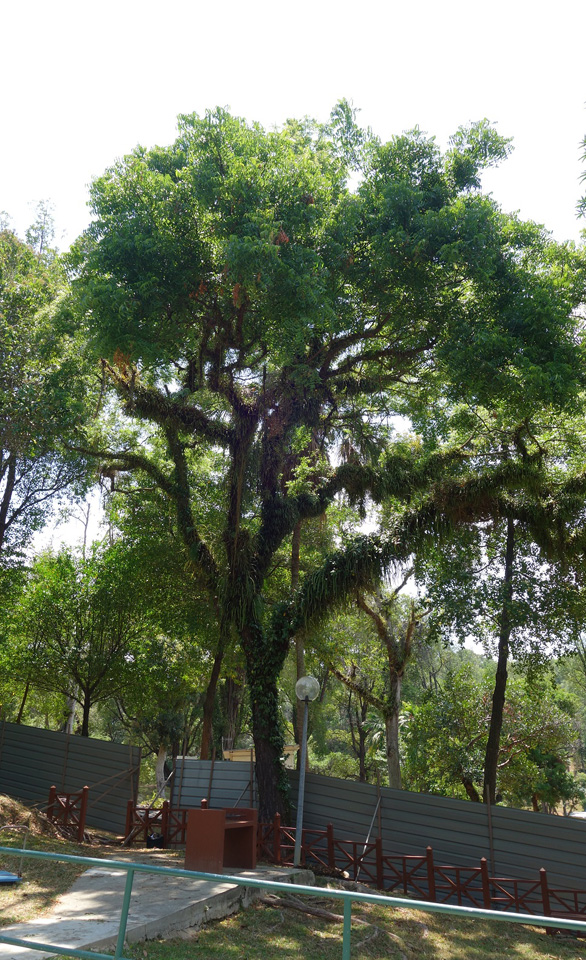 Where to find it: St John's Island, near the village house and jetty entrance

The evergreen Neem (Azadirachta indica) grows fast in the tropics and can reach up to 15 to 30 m tall. Native to the Indo-Pakistan sub-continent, the species tolerates drought and thrives in well-drained soils.

The scientific name for the genus, Azadirachta, comes from the words azad, meaning ‘free’ in Persian, and dirakht, which means ‘tree’. The name indica refers to its Indian origin. Hence, the name literally means the ‘free tree of India’. This is fitting as it has many uses, including medicinal, agricultural and environmental.

The tree produces small white flowers, which have a very sweet, jasmine-like scent. The flesh of its fruit, a drupe, is edible and has a bittersweet taste. Its leaves, each about 15 to 40 cm long are pinnately compound and carries eight to 19 asymmetrically curved leaflets. Birds like the Yellow-vented Bulbul (Pycnonotus goiavier), Olive-winged Bulbul (Pycnonotus plumosus) and Black-naped Oriole (Oriolus chinensis) feed on its fruit.

This Neem Heritage Tree measured 2.2 m in girth when endorsed in 2019, and has likely stood on St John’s Island for more than 50 years. 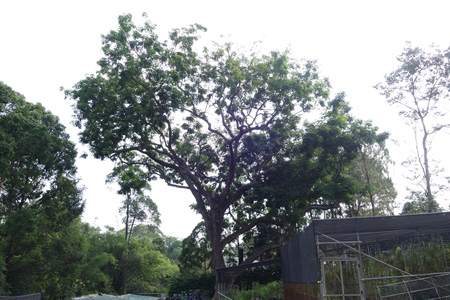 Where to find it: National Orchid Garden Nursery in Singapore Botanic Gardens

The Ordeal Tree (Erythrophleum suaveolens) originates from tropical Africa and can grow to a height of 30 m. It has a wide-spreading crown and its young leaves are attractive with a coppery colour. Its flowers are small, cream to yellow, and grow in dense, long bunches. When pollinated, they mature into flat, woody pods.

The bark contains an alkaloid that acts on the heart, and some African tribes make a poison from it that is applied to arrows. The bark can also be pounded into a powder that, if placed in water, will turn the water red. This is sometimes dispensed as an ‘ordeal’ poison to people accused of crimes. The belief is that the person will die from the concoction if guilty, and survive if innocent.

This Ordeal Tree originally stood in the former Economic Garden but was transplanted to its current location before 1920. This was done in preparation for the Economic Garden’s land to be reallocated for the development of Raffles College. This Ordeal Tree is more than 100 years old and had a girth of 5.4 m when endorsed as a Heritage Tree in 2019.

Of Figs and Leaves 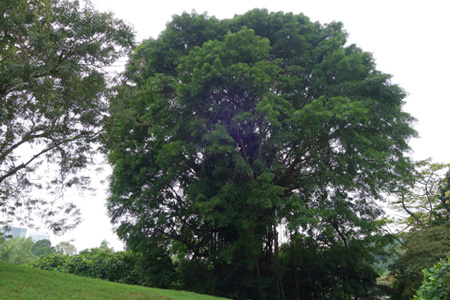 Where to find it: Off No. 3 Winchester Road, near Pasir Panjang Nursery

The Stem-fruited Fig (Ficus caulocarpa) is a large, deciduous tree that can grow up to 35 m tall. It occurs naturally in Sri Lanka, India, Myanmar, Thailand, the Ryukyu Islands, Taiwan, Peninsular Malaysia, Singapore, Sumatra, Java, the Lesser Sunda Islands, Borneo, the Philippines, the Celebes, the Moluccas, New Guinea and the Solomon Islands.

The tree develops a vast crown of spreading branches. Its old leaves are shed rapidly and new ones develop simultaneously over most of the crown within a fortnight. During this process, the pale-green bud-scales, known as stipules, and fallen leaves carpet the ground below the tree. Its figs are whitish with dull pink spots, and ripen to a dull greyish purple.

The base of this Stem-fruited Fig was 24 m in girth when endorsed in 2019. 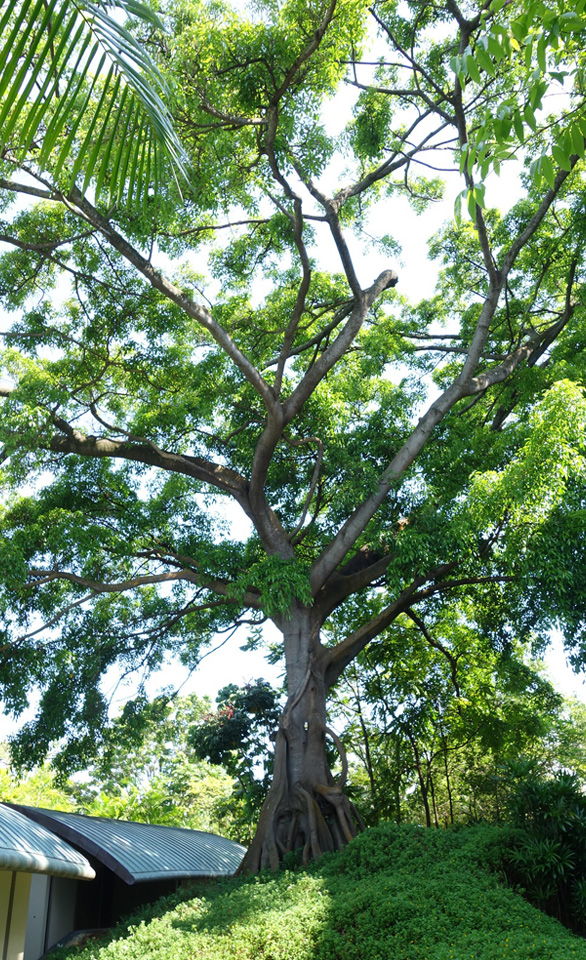 Where to find it: Capella Hotel on Sentosa

The Johore Fig (Ficus kerkhovenii) is an immense strangling fig that can grow up to 45 m in height. It has a very large and wide spreading crown and pinkish brown bark. Its figs ripen to a pale yellow or orange colour. Native to Singapore and considered Critically Endangered in the wild, this species was reportedly common in Java and Malaya in the mid-1900s.
As with many other Ficus species, the figs are a reliable source of food for fruit-eating animals such as the Pink-necked Green Pigeon (Treron vernans), Coppersmith Barbet (Megalaima haemacephala) and Yellow-vented Bulbul (Pycnonotus goiavier).

This tree was conserved by the hotel when it was developed in the early 2000s. It measured 6.8 m in girth when endorsed as a Heritage Tree in 2019. 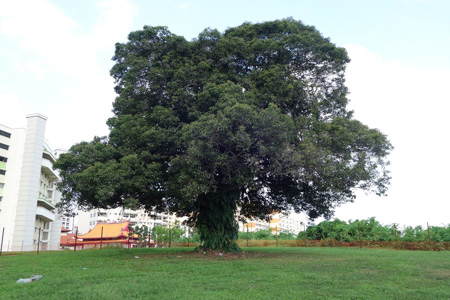 Where to find it: Near Block 137 Lorong Ah Soo

The Tanjong Tree (Mimusops elengi) is an evergreen tree that can grow up to 15 m in height. It has a rounded crown and its leaves are smooth and simple with wavy margins. Its flowers are small, star-shaped, white and have a sweet smell.

The fruit is orange-red in colour, with velvety skin, and contains a single large hard seed. Birds such as the Black-naped Oriole (Oriolus chinensis), Pink-necked Green Pigeon (Treron vernans) and Asian Koel (Eudynamys scolopacea) feed on the ripe fruit.

In the past, children would string the dried star-like flowers into necklaces. The tree has many traditional medicinal uses: the leaves are used to ease head-aches, the bark is used to treat pimples and the roots are used to soothe sore throats.

Based on its large girth of 4 m, it is estimated that the tree has stood here for more than 60 years when endorsed in 2019.

Shrub That Can Grow Into a Tree Where to find it: Andover Road, near Chalet No. 7’s BBQ pits

The Mock Lime (Murraya paniculata) is native to Southern Asia. A compact evergreen shrub that typically grows to 2.5 to 3.5 m tall, it can occasionally become a tree reaching up to about 12 m in height, as this tree highlights.

Its compound leaves are alternate and pinnate, with three to seven dark green and glossy leaflets. Its small and white flowers are produced in abundance and have a very pleasant fragrance.

Birds like the Yellow-vented Bulbul, Black-naped Oriole, Coppersmith Barbet (Megalaima haemacephala) and others are attracted by the fleshy and bright red fruit and help to disperse the seeds after feeding on the fruit.

The Mock Lime has a dense growth form and blooms year-round, making it an excellent hedge plant for screening.

This tree is estimated to be more than 70 years old. When endorsed as a Heritage Tree in 2019, it had a girth of 2 m. 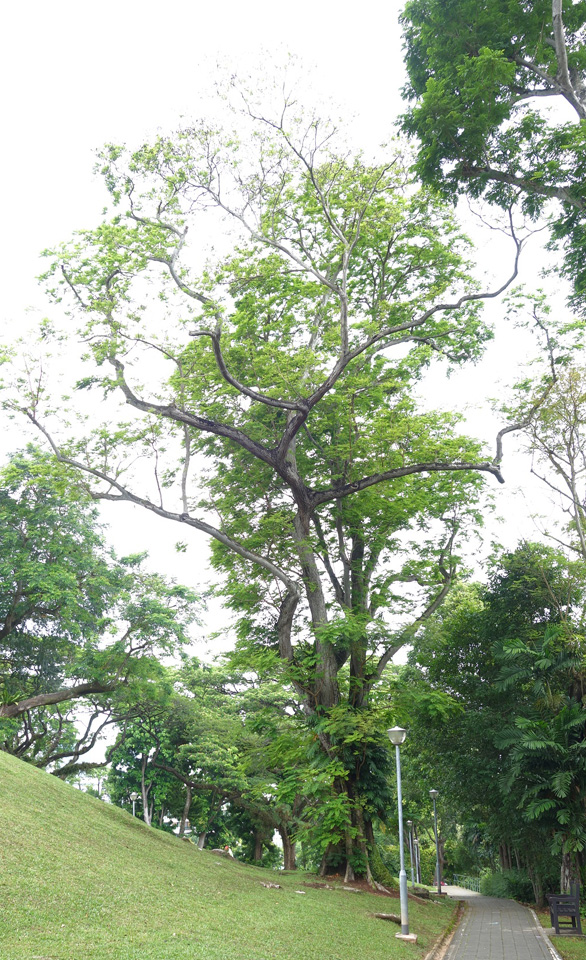 Where to find it: Mount Emily Park, near Upper Wilkie Road roundabout

The Yellow Flame (Peltophorum pterocarpum) is a deciduous tree that can grow up to 35 m in height. It has a wide-spreading, umbrella-shaped crown and slightly rough light grey bark. Its leaves are bi-pinnate with many tiny leaflets.

It produces bright yellow blooms which are about 3 cm in size and occur in bunches. Its fruit is a pod that is 5 to 10 cm long and ripens to a purplish brown colour. This species is native to Southeast Asia, including Singapore, where it grows naturally on rocky, sandy shores and back mangroves.

While it is considered Critically Endangered in the wild in Singapore, it has been widely planted along roadsides for its wide, shade-providing crown, and bright yellow blooms, which occasionally cover the entire tree.

This Heritage Yellow Flame Tree measured 4.8 m in girth when endorsed in 2019. It is estimated to have stood here for more than 70 years. 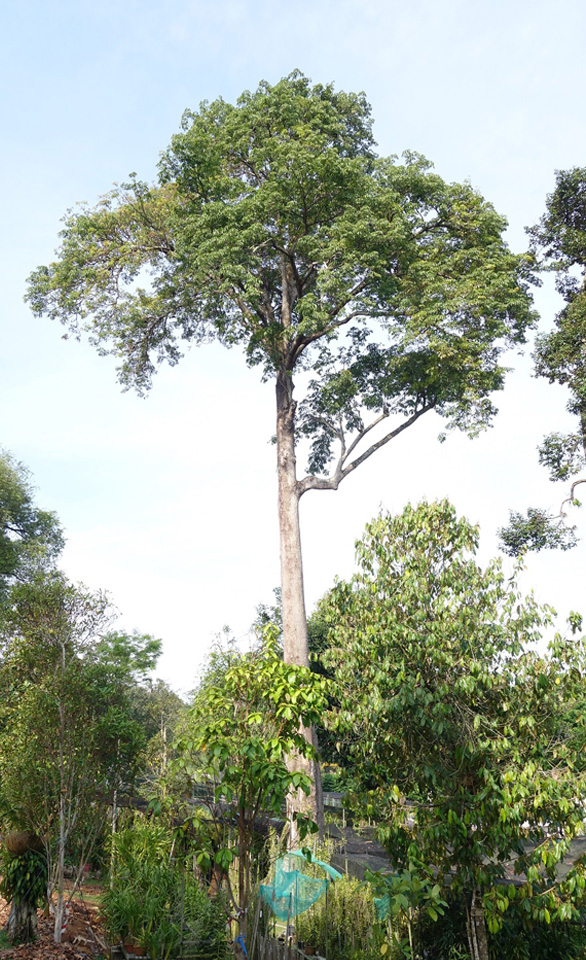 Where to find it: National Orchid Garden Nursery in the Singapore Botanic Gardens

The Giant Sterculia (Sterculia foetida) is a large deciduous tree that can reach heights of up to 40 m. Its natural distribution includes East Africa, India, Sri Lanka, Myanmar, Thailand, Cambodia, Vietnam, Peninsular Malaysia, Indonesia, Philippines and North Australia. It grows on coastal areas and in semi-open forests, and has a straight bole with a smooth grey to whitish outer bark and fibrous inner bark.

The Giant Sterculia is dioecious, meaning that male and female flowers are borne on separate trees. Its flowers lack petals, although they have a red, five-lobed calyx that resembles a set of petals. They give off an unpleasant smell, and its scientific name hints at this – the genus Sterculia was named for the Roman god of manure, Sterculius or Sterquilinus, and its species epithet, foetida, means ‘foul-smelling’.

Its fruit is bright red and has one to five boat-like sections that altogether house 10 to 12 black seeds.

This Giant Sterculia originally stood in the former Economic Garden but was transplanted to its current location before 1920. This was done in preparation for the Economic Garden’s land to be reallocated for the development of Raffles College. It is more than 100 years old and had a girth of 5.4 m when endorsed as a Heritage Tree in 2019.