Return of a Giant Reed 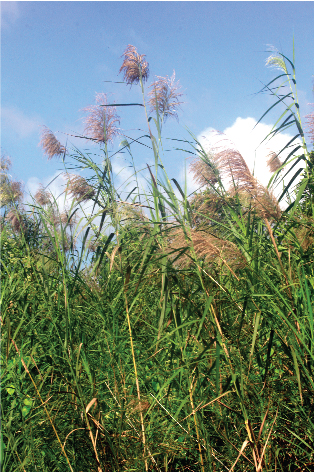 The Common Reed or Phragmites karka in Kranji Marshes, with plants well exceeding 3 m in height.


In January 2019, while on a trip to Kranji Marshes to collect plant samples for the Flora of Singapore project, NParks staff noticed several patches of tall reeds growing near the Raptor Tower.

These grasses were much taller than any that were previously encountered in routine wildflower surveys. Most of the larger grass species in Singapore are less than 2 m tall even in flower, but the stands there were almost twice that height. A number of the flowering stems were well over 3 m, with a few coming close to 4 m in height.


A specimen of this tall reed was collected for further investigation. Detailed photographs of the specimen were subsequently sent to Dr Leni Duistermaat in Leiden, Netherlands, an expert on the Poaceae who was contributing to the taxonomic account of the family for the Flora of Singapore.


It was a great surprise that the plant turned out to be Phragmites karka, or the Common Reed. Though this native species does live up to its name as being common elsewhere within its extensive range (tropical Africa to Japan, down through mainland Southeast Asia and to the Pacific Islands), it is certainly not so in Singapore.

In fact, the species has not been seen locally for more than 140 years, since it was collected by Henry Ridley from a “freshwater isle” in Pulau Bukom in the 1880s. But there was one

more question – could the plants have been introduced from a horticultural source, since the specimens were growing in a publicly accessible, redeveloped area?

A quick check revealed that the plants were indeed planted, but they had been propagated from individuals already present in the vicinity prior to its conversion into a protected area. One of the key ideas for the redevelopment of the marshes was to amplify the natural vegetation to create more areas where birds and wildlife could take refuge. NParks propagated some of the existing vegetation, including the tall reed, and subsequently transplanted this material into other parts of Kranji Marshes.

In the taxonomic account detailing the Poaceae in the Flora of Singapore (volume 7, published in October 2019), Dr Duistermaat listed the provisional conservation assessment for Phragmites karka as being ‘Data Deficient’. This was because, although the species was recorded at Kranji Marshes before the volume was published, the actual population size at the nature area had not yet been estimated.


Currently, NParks is surveying the area to assess the number of plants present, in order to determine the conservation status of the species in Singapore. Based on this, corresponding measures will be developed for the long-term survival of this species in the area.

Helps Prevent Algal Blooms
In the wild, this tall, majestic grass with feathery flower heads is associated with wetlands and freshwater marshes, where it forms large and continuous stands if the growing conditions are ideal. The dense growth creates hiding places and nesting sites for waterfowl and numerous wetland animals, and the seeds provide food for birds.

Phragmites karka is not just a plant in the landscape or useful as a refuge for wildlife – studies have shown that the species is highly effective in removing excessive nutrients and heavy metals from waterbodies. It is hence an ideal candidate for use in phytoremediation and can be planted in or near waterbodies to prevent algal blooms where there tends to be high levels of fertiliser run-off from surrounding areas.

Two of the taller specimens that have been successfully propagated by the Native Plant Centre.


While Kranji Marshes may be the only place in Singapore where you can currently see this species, NParks is working on propagating it for introduction to the Singapore Botanic Gardens. Plants propagated from older culms are already forming plantlets of their own (indicated by blue arrow) that can be used for future propagation.


Although this is a clumping species that can be easily propagated by division, this method was ruled out to minimise disturbance to the existing population. Thankfully, upon further examination of the plants in Kranji Marshes, several individuals bearing aerial plantlets along the nodes of the stems were located. A portion of these plantlets were harvested and used for propagation.


Learning More About Our City in Nature
Over the years, NParks has created a green network comprising roadside planting and a Park Connector Network that links up parks and other green spaces. Skyrise greenery dot developments while biophilic design has been adopted in restoring habitats.

Visiting Our Green Spaces
Mask-wearing in outdoor settings such as parks, gardens and nature reserves is optional but continues to be required when you visit our indoor facilities, such as museums, galleries and enclosed visitor centres.

Before heading down to our parks, please visit SafeDistParks.nparks.gov.sg for the latest updates on visitorship levels.

Visit NParksSG, our YouTube Channel that serves as a one-stop repository for more than 500 video resources. It also provides a platform for existing and future digital outreach including DIY gardening and related crafts, virtual tours of our green spaces, and livestream events.

This is a slightly edited version of an article that originally appeared in the February 2021 Vol. 56 of Gardenwise.

About the writers and photographers
Yang Shufen oversees and manages Sungei Buloh Wetland Reserve and its associated Sungei Buloh Nature Park Network. Her main interests include mangrove and shorebird conservation. Lim Hui Xuan manages Kranji Marshes, caring for the conservation of flora and fauna that resides there.

Cherish Yong oversees the propagation and care of selected plant species at the Pasir Panjang Nursery. Lily Chen currently works on naturalised plant species and is also involved in taxonomic work for the Flora of Singapore.