The Most Trafficked Animal in the World

The Sunda Pangolin or Malayan Pangolin (Manis Javanica), is a shy, and elusive nocturnal mammal covered in hard scales from head to tail. Also known as the scaly anteater, it has been listed as Critically Endangered since 2008 in the Singapore Red Data Book. Internationally, it is also considered Critically Endangered under the International Union for Conservation of Nature (IUCN) Red List of Threatened Species. It resides in Southeast Asia, and is one of the four pangolin species found in Asia.

How much do you know about this curious animal? Here are 10 facts about the Pangolin! 1. Home Sweet Home
The Sunda Pangolin calls Singapore its home. It resides in the Central Catchment Nature Reserve and Bukit Timah Nature Reserve, and can also be found in forested areas in Bukit Batok, the Western Catchment Area, and on the islands of Pulau Ubin and Pulau Tekong. Occasionally, it can wander into residential areas from the nearby woods.

2. Pest Controller
Although it looks like it belongs in the Jurassic period as one of the dinosaurs, the pangolin plays an important ecological role. It controls termite and ant populations, as well as helps to loosen and aerate the soil when digging for food. An adult pangolin may consume up to about 70 million insects per year!

3. Cross Safely
Unlike in other countries where trafficking is the main cause of death, Sunda Pangolins in Singapore often get into traffic accidents. The clumsy gait of these slow-moving animals, coupled with urbanisation, causes many of them to be injured or killed when they stray too far off from forested areas and onto roads. To remedy this, there have been increased efforts in Singapore to ensure that there is adequate infrastructure such as ecological corridors and buffer nature parks for ecological connectivity. This allows the animal to move freely between nature reserves and rainforests. The Eco-Link Bridge @ BKE, and our Nature Parks surrounding the Central Catchment Area are some examples.

4. Poached for its meat and scales
The pangolin’s unfortunate status as the world’s most trafficked animal has its roots from overexploitation from poaching for consumption of its meat and body parts (such as its scales) in the illegal wildlife trade. Since 2000, it is estimated that up to 1 million pangolins have been taken from the wild for illegal trade globally. This is to cater to demands of China and Vietnam’s luxury meat and traditional medicine markets. Pangolin meat is eaten as a luxury dish in high-end urban restaurants as a sign of wealth and some believe that its scales, blood and fetuses have healing properties in traditional medicine. The market price of its scales can fetch up to S$4,200 for one kilogramme!

5. They See Me Rollin’
The word pangolin is derived from the Malay word ‘penggulung’ which means roller – representative of how the pangolin behaves when it feels threatened, rolling up into an almost impenetrable ball to protect its tender undersides. However, this means that it becomes an easy target for poachers who can simply pick it up and carry it away!

6. Sticky Utensil of Choice
The pangolin’s sticky tongue is its only utensil of choice, to lap up ants and termites, and can extend up to 27 inches (70 cm) long. In comparison, a pangolin’s body width is only between 24 to 62 inches (60 to 160 cm) long. This means that its tongue is almost half its body length! The pangolin has no teeth. 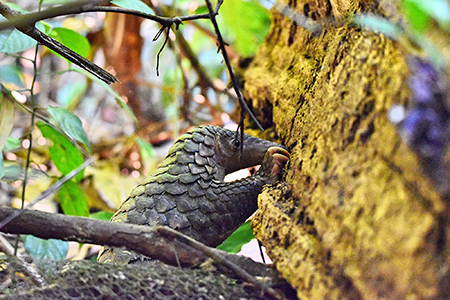 7. Slow Baby Boomers
The pangolin has a low fertility rate of only one to two offsprings per year. As such, the global pangolin population is depleting at a much faster rate than it can recover. Infant pangolins depend and ride on their mothers’ tails for around three to six months.

8. On A Scale Of…
The number of scales on a pangolin is estimated at approximately 900 to over 1000, comprising about 20% of its total body weight. Pangolins’ scales are made of keratin, the same protein that makes up our own hair and nails and the rhinoceros’ horn. There is no scientific evidence that the pangolin’s scales have any medicinal and health benefits. The only part of a pangolin not covered in scales is its delicate underside, which is covered with a few sparse hairs.

9. Asian-African Pangolin Family
There are eight species of pangolins around the world, four of which can be found in Asia: the Sunda, Palawan, Chinese and Indian Pangolin. The other four can be found in Africa: the Tree, Giant Ground, Cape and Long-tailed Pangolin.

10. International Action
All eight species of pangolins are now prohibited from international trade with greater protections won at the 2017 conference of the Convention on International Trade in Endangered Species (CITES), hosted by the United Nations (UN) Environment. However, the illegal wildlife trading of pangolins for its meat, scales, blood and bones, has not stopped. To commemorate World Pangolin Day, the National Parks Board (NParks) and The Pangolin Story prepared a fun day of activities on 23 Feb 2019. Held at Windsor Nature Park, visitors got to see a pangolin specimen and learn more about this critically endangered species through informative panels, nature trails and parent-child bonding activities!

These activities help to raise awareness of the species and highlight the importance of our local biodiversity and pangolin conservation. With such outreach efforts, we hope to encourage the general public to pass their knowledge to family and friends, and raise awareness about the Sunda Pangolin found in Singapore. What You Can Do To Protect the Pangolin
• Show your support for local conservation and biodiversity efforts
o Volunteer your time with the Singapore Pangolin Working Group
• If you witness any illegal trading or poaching:
o Collect information. Take photos or video evidences of the traps, snares, nets, trapped animals, poachers, and/or their vehicle license plate number.
o Call us at 1800-476-1600, if you are inside a protected area, such as a nature reserve or national park. Alternately, you can call the local police.
• Do not buy any pangolin products, such as meat, scales and medicinal products.
• Raise awareness by sharing with your friends and family about the threats to pangolins, and what can they do to help.
• Report your sightings, and contribute resources or media you have to various animal research and welfare groups to assist in research and conservation efforts.

What do I do when I encounter a pangolin?
• Do not be alarmed. These animals are shy and will not attack humans.
• Do not touch, chase or corner them, as they will be frightened from your approach. You are advised to leave them alone.
• Observe them! It is very rare that you will get to see a live pangolin. Share your findings with pangolin research and welfare groups

Lynn Chan is a Third Year Mass Communications student of Nanyang Technological University (NTU). As part of her school’s professional internship programme, she is working in NParks’ Communications and Community Engagement department for six months. During this time, she created posts for NParks' social media platforms, wrote articles for My Green Space, assisted with media queries and was involved in the preparation of media materials for events such as the Festival at the Fort and the opening of Jurong Lake Gardens.