Every year, coral reef researchers in Singapore eagerly await the full moon preceding Easter, so that they can spend a special night out to witness a spectacle that was once thought to be reserved only for the pristine waters of the Great Barrier Reef. The event? Mass synchronous spawning of corals - something that occurs only once a year, in which millions of coral sperm and eggs are released into the sea, to be at the mercy of the winds and waves.

All shapes and sizes

Four days into the waning of the Easter full moon, these corals reach the peak of their sexual activity, pushing out the sperm and egg bundles that will rise to the waters' surface where the bundles break up. When the sperm and eggs of the same species meet, fertilisation occurs, leading to the creation of worm-like larvae that drift with the currents before settling on a suitable surface to grow.

This spawning will continue for up to two weeks, with some colonies spawning more than once, before their reproductive drive diminishes and stops altogether until the next year. The egg and sperm bundles come in all shapes and sizes and different species release them differently - some pop out all at once in an explosion of small orange balls, some are released as irregularly-shaped, lumpy masses, while others are nothing more than a puff of milky white liquid.

Regenerating for the future of our reefs

Other reef inhabitants take this opportunity for some late-night snacking - fusiliers, soldierfish, shrimps and other invertebrates come out in force to feast on this bonanza of richness. The researchers, meanwhile, swim frantically from colony to colony to document the event.

The species, time of spawning, and how long it takes for spawn to be released, are recorded as part of a worldwide effort to better understand the processes behind this annual event. What forces drive the process? Is it simply a combination of lunar and tidal influence? Or are there other subtle factors involved?

No one yet knows, although we do know that El Niño* affects spawning to some extent; last year, El Niño caused mass coral bleaching, a stressful event that turned corals 'white' (hence 'bleaching'), and subsequently reduced the mass spawning response. The corals seem to have recovered from that climatic event; over 35 species were observed this year, with four species recorded for the first time in Singapore.

All in all, from 2002 to 2012, 73 species have been observed to participate in mass spawning . These larvae are particularly important for Singapore reefs, as studies show that Singapore corals are self-seeding, meaning that many of the larvae will settle on the reefs within Singapore waters. Thus, it is important for us to protect our own reefs to ensure the sustainability of our natural habitats.

Assured that the next generation of coral recruits are well on their way to perpetuate their species, the researchers call it a day after three nights of observations, and wish the larvae well on their journey to adulthood. *El Niño is an ocean-atmosphere climate phenomenon that is defined as warmer than normal sea-surface temperatures in the Pacific Ocean that impacts global weather pattern.

By Jeffrey Low and Karenne Tun

Karenne Tun is a PhD candidate at the Reef Ecology Laboratory, Department of Biological Sciences, NUS.
You can watch videos of the spawning of corals, filmed by Jeffrey Low, at these two links (video 1) and (video 2). 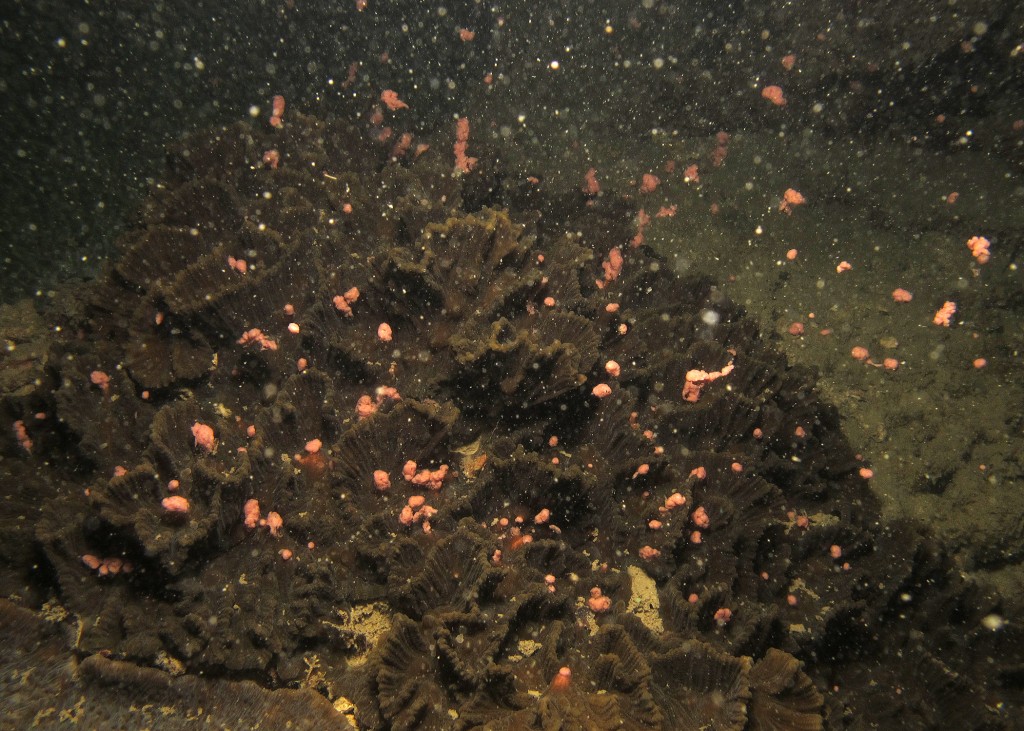 Pectinia spawning: egg and sperm bundles from Pectinia are typically extruded in a stringy, lumpy mass. Soldierfish eating spawn – one of the many species of fish that take advantage of the rich bonanza released by the corals.