All green plants possess chlorophyll where they harness the energy from the sun to make food, grow and flower. Without sufficient light, they will exhibit symptoms like elongated, weak new growth (etiolation) and a lack of flowers. They also become easily infested with pests or succumb to diseases, and eventually waste away.

Shady areas can be problematic for gardeners and horticulturists as there is a limited range of plants to choose from. To complicate the issue further, there are different levels of shade. The amount, duration and intensity of light to sustain plant growth vary from one shady spot to another. Hence it is vital to first know the type of shade experienced at a particular location and then choose the right plant.

A Selection of Plants for Shady Gardens 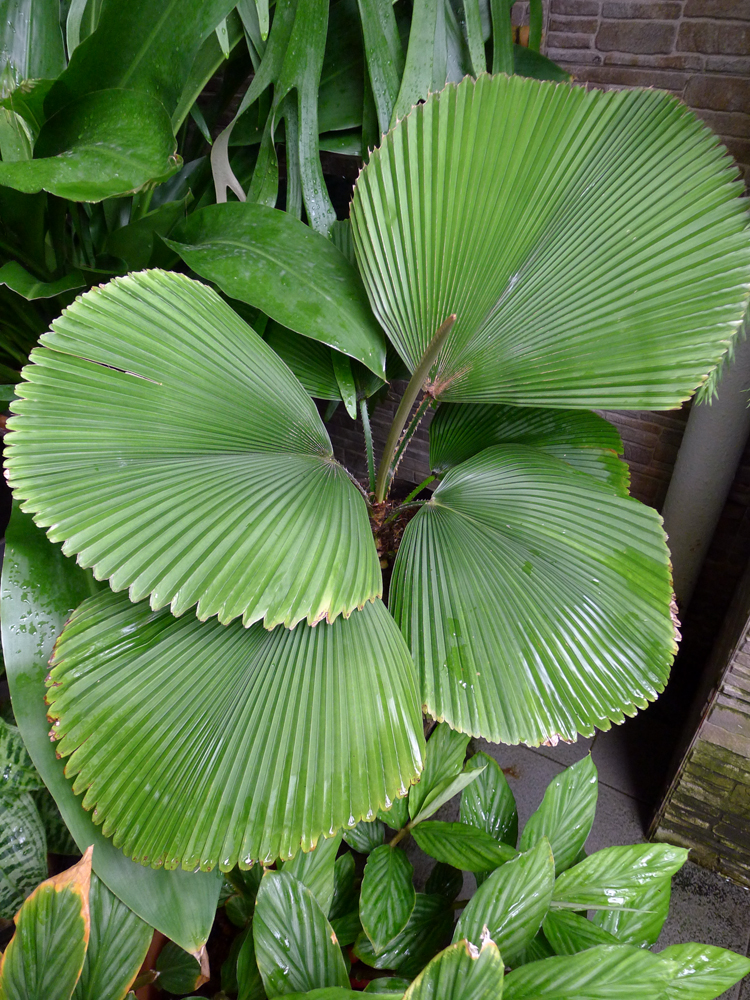 The Parasol Palm features almost round leaves with a pleated texture. It is best grown in partial to full shade.

This palm species grows in the understorey of the rainforest, under partial to full shade. It features nearly-round leaves with a pleated texture that are distributed attractively around the plant. This palm looks best when several individuals are grown together in a colony.

This palm is very slow-growing. It can be grown in a pot with moist, friable (easily crumbled) soil mix that is rich in organic matter or in a well-draining location in an outdoor garden. Just note not to grow it in windy locations.

Orchidantha is a slow-growing plant with a lush clump of dark green strap-like leaves. It is one of the few plants capable of growing in dense shade.

Orchidantha is a relatively unknown genus of flowering plants that is distantly related to gingers and bananas. The genus nameOrchidantha means “orchid flower”, as the flowers that are produced near the base of the plant resemble orchids.

Plants from this genus are slow-growing, with lush clumps of dark green strap-like leaves. They are capable of growing in dense shade and can be cultivated in a pot with moist, friable soil mix that is rich in organic matter, or in a well-draining location in an outdoor garden. 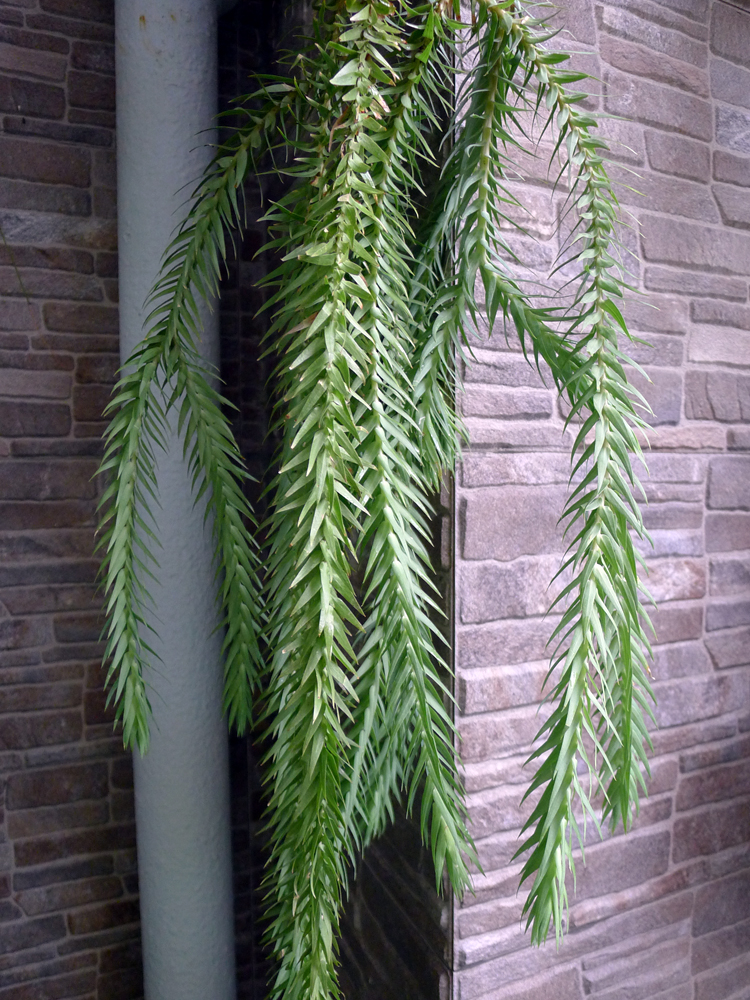 Tassel Ferns have pendulous stems that hang gracefully and are excellent for growing on vertical gardens in shady locations. Shown here is the Blue Tassel Fern (Huperzia goebelii).

Several species of the Tassel Fern are now available for purchase in nurseries. The species commonly sold are epiphytic and they are best grown mounted against a well-aerated but moisture-retaining soilless media, such as pine bark.

This plant demands high humidity to thrive and is best protected from wind. It should be placed in a location with partial shade and not be exposed to direct sunlight. Tassel Ferns have pendulous stems that hang gracefully and are excellent candidates for growing on vertical gardens at shady locations.

The Shingle Plant is an interesting climber with juvenile, heart-shaped leaves that grow so closely that they almost overlap one another. It prefers a cool and moist surface to climb on, such as a tree trunk or brick wall – give it a large vertical space exposed to partial shade for best results.

The Bat Lily is an unusual plant with flowers that are somewhat bat-shaped and come with long ‘whiskers’! In nurseries, one may find two species of Bat Lilies, namely, the White Bat Lily (Tacca integrifolia, with white bracts) and the Black Bat Lily (Tacca chantrieri, with black bracts), which is shown above.

This plant grows as a rosette and it should not be buried too deeply as the crowns will rot. It is best grown in partial shade and well-drained soil that is kept moist, but not soggy. High humidity is a must. 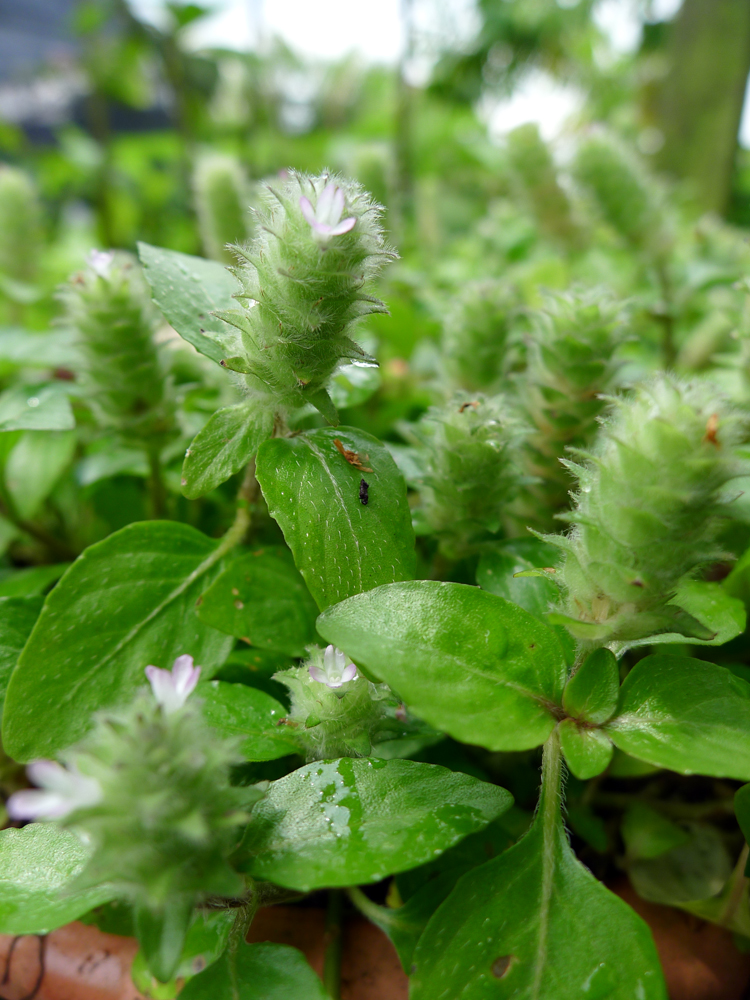 The Blue Pussyleaf can form a dense carpet on the ground and is best grown in a moist location exposed to partial to full shade. It produces white, furry inflorescences.

The Blue Pussyleaf is a plant that features trailing stems which are densely covered with soft hairs. It produces white, furry inflorescences, where tiny white flowers peak out from in between the bracts. Capable of forming a dense carpet, the Blue Pussyleaf is best grown in a moist location exposed to partial to full shade. 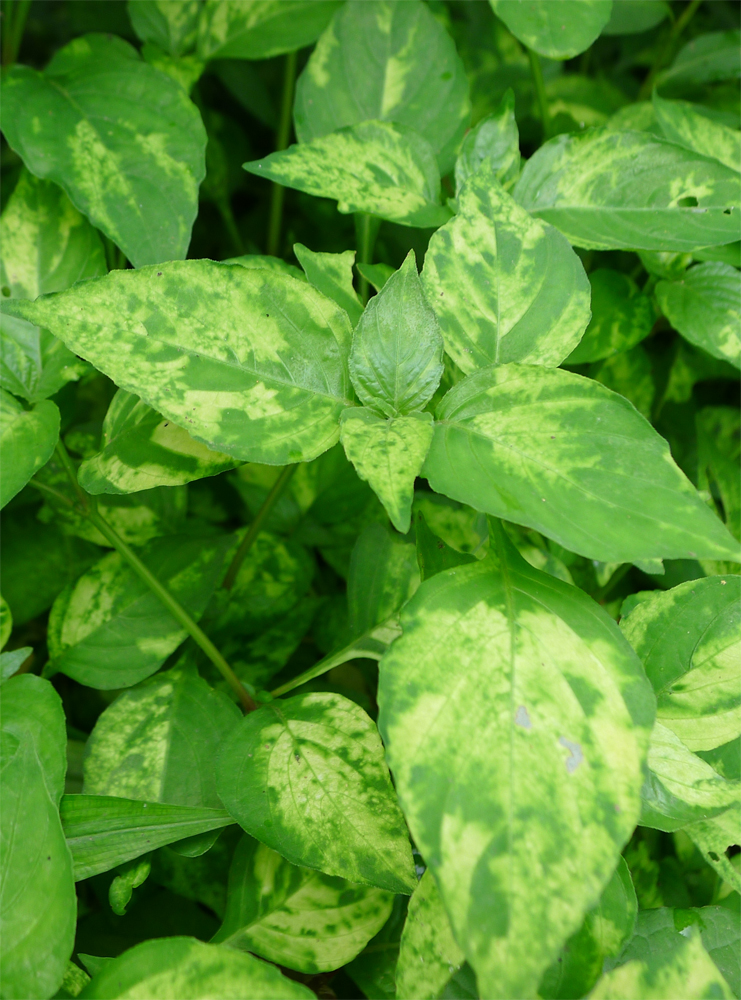 The Variegated Primrose is a ground cover plant with highly ornamental leaves that are splashed with yellow. It can form a dense carpet and is best grown in partialto full shade.

A unique cultivar of the species that rarely flowers, the Variegated Primrose makes up for its lack of flowers by having ornamental leaves that are splashed with yellow. It is a creeper that is capable of forming a dense carpet and is best grown in a moist location exposed to partial to full shade.

Hi Li- San Am a newbie. I have a shaded balcony, slightly windy. And I have invisible grills at balcony. My idea is to have a pot of plants that will climb up the grills. At the same time giving me privacy from my Neighbour. At the moment I'm trying money plant but I find the leaves r not dense enough. And advice on what to plant?

Hi, may i know where can I buy the seedling of Bat Lily (Tacca) in Singapore?

Hi Gerard, Let me answer on Li-San's behalf. Money plant and its climbing relatives from the yam family are not good candidate for climbing up thin wire lines as they prefer a rough moist surface to climb on. In your case, true climbers which wind their stems around vertical supports are more appropriate but most of these plants are sun-loving ones which may not do well for your shaded balcony. Depending on the type of climber used, plants growing on invisible grilles can make maintenance more difficult. As such, I would suggest to place a long planter box in the shade and plant some shade- and wind-tolerant plants, to serve as a privacy screen. An example would be the Finger Palm (Rhapis multifida). Avoid using broad-leaved plants as their leaves get torn easily if placed in windy areas. I hope this information helps. Thank you!

Hi, may i know where can I buy the seedling of Bat Lily (Tacca) in Singapore? Thank you