Hornbills in the Lion City

By now it must be difficult not to know that there are hornbills living wild and free in Singapore. They have received plenty of newspaper coverage over the past few years, and can be seen in many places on the mainland and offshore islands. But there is much more to their story than you might think.

The Oriental Pied Hornbill is a species native to Singapore, that bred here during the 19th century, and that declined to the point of local extinction. The exact pattern of sightings is poorly documented, but individual birds must have been coming and going, from time to time right up to the 1960s. It was not until the 1990s that birds were seen regularly again in the mangroves of Pulau Ubin. They first nested around 1997, and have now built up a significant population.

Ody, one of the Istana hornbills, with three of its chicks.

It was this population that became a focus for work by the National Parks Board, Wildlife Reserves Singapore, and independent researchers Marc Cremades and Ng Soon Chye (the authors of the book) from 2004 onwards. Suspecting that one factor limiting their breeding success was the shortage of big trees with cavities to nest in, the team designed nest boxes that proved an instant success.

This allowed all sorts of research to be carried out that would otherwise have been very difficult - by installing cameras inside and outside the nest, to observe the behaviour of the male, female and newly hatched chicks, by installing a weighing platform to determine how much food the nest occupants received, and by installing devices to measure air temperature and composition inside the nest. This book tells the story. It's a story of enterprise and resourcefulness, using basic equipment combined with modern technology such as video and computers. It follows the success of particular individuals amongst Singapore's growing hornbill population, and sets the scene for next steps.

One of the nest boxes set up by NParks to assist the Oriental Pied Hornbills to breed as well as to study their behaviour.

It would be easy to point out that the hornbills actually made their own comeback without the need for help, and that the numbers are trivial in a global context.  Both criticisms would miss the point.

The spread of hornbills to the mainland has probably been facilitated by nest boxes, but the key benefit of nest boxes has been to acquire knowledge. This knowledge can be applied in conservation of the Oriental Pied Hornbill within Singapore, and throughout its Southeast Asian range.  And the numbers may be small, but a population of 60 to 100 hornbills in a place the size of Singapore is not insignificant. More telling, it is a demonstration of what can be done to encourage fairly rapid increase of a large bird in an urban setting.

Marc Cremades, the main writer, has included many dramatic photos in this full-colour volume. That's not too difficult because hornbills are dramatic birds, but there are also some cunning examples combining photos with artwork, and even computerised whole-body radar scans! Volunteers and NParks staff and locations figure prominently in the hornbill story.

The Istana and Pulau Ubin have been key sites for the project, where the conditions have enabled project work that would have been very difficult elsewhere. The site managers, and conservation and parks staff, have played important roles in the comeback of the hornbills, and the involvement of Wildlife Reserves Singapore (in particular Jurong Bird Park) is clearly shown. This is an interesting read, in a very attractive format, and yet it shows hard science with a colourful wrapping !

Hornbills in the City: A Conservation Approach to Hornbill Studyin Singapore is available at $50 at all major bookstores and Singapore Botanic Gardens retail shops - the Garden Shop and the Library Shop. 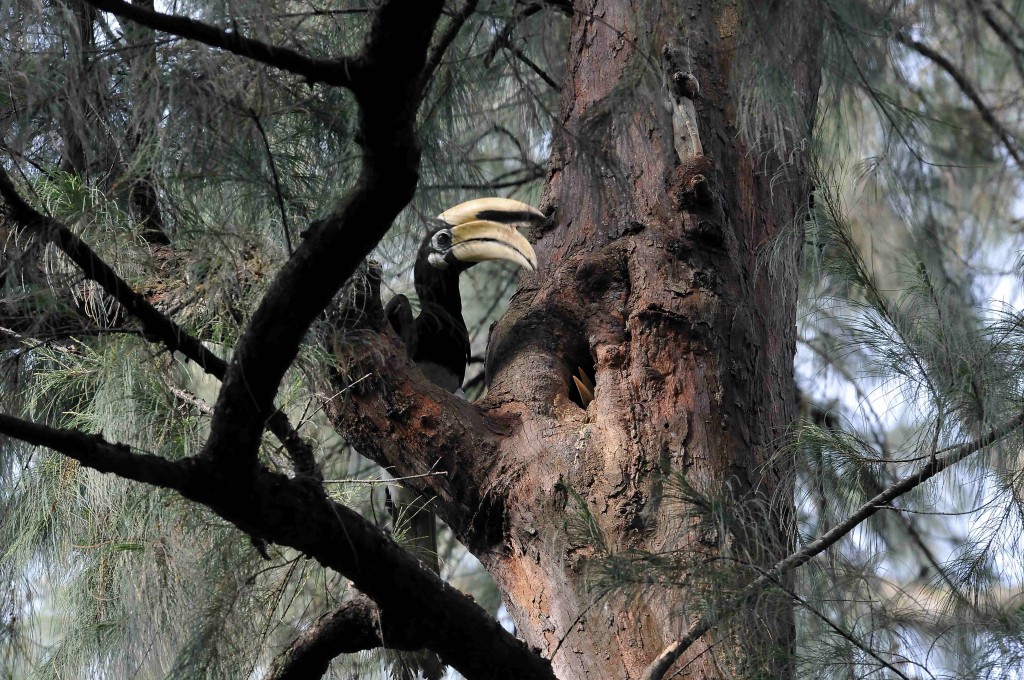 An Oriental Pied Hornbill with its mate sealed up in a natural cavity.

Bobby (left) was born in the Istana grounds and has started his own family after being moved to Sungei Buloh Wetland Reserve.

Hi Lynn, As the hornbill project ended a few years ago, we are no longer installing artificial hornbill nest boxes. You could try making your own instead based on the design shown in the book, <em>Hornbill in the Cit</em>y.

Hi, We just saw an oriental pied hornbill in the Tembusu tree in our garden in Cornwall Gardens. We would like to put a nest box in our tree. Where can we get a nest box? Many thanks! Cheers, Lyn

I spotted 4 of them, eating fruits at Marine Vista. Posted videos and images on facebook with #nparksbuzz today. : )

Hi, I sighted 6 oriental pied Hornbill today afternoon in my condo.It came and perched on the balcony of one of the units.My condo is Dover Park View,38 Dover Rise.I clicked some photos and I can forward it I can get an email id. Thanks n Regards, Supriya Rodrigues