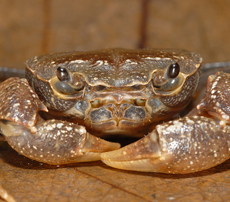 The Singapore Freshwater Crab, found only in Singapore.

Mention the word 'crab' in Singapore, and images of the ubiquitously adored Chilli Crab – a popular Singapore seafood dish – is conjured in people's minds. But do you know that other than its famous chilli crabs, Singapore has another claim to fame in another crab – the Singapore Freshwater Crab?

A uniquely Singapore species
The Singapore Freshwater Crab is certainly not one that you will expect to find in your wok. In fact, it grows to a size of only 2-3cm, so tiny that you would hardly notice its presence in the freshwater streams of Singapore. Known scientifically as Johora singaporensis, this species is one of the three known species of crabs endemic to Singapore. This means that it is unique to Singapore and not found anywhere else in the world!

Ecology and distribution
The Singapore Freshwater Crab was first discovered and described in 1986 by Peter Ng, now a professor at the National University of Singapore. It lives in streams running through undisturbed forests and tends to seek cover under rocks in the stream.

The crab is a nocturnal creature and feeds on detritus and worms found in the stream bed. It appears to have an environmental preference for relatively clean and fast-flowing streams in the highlands with a near neutral pH and high concentration of dissolved oxygen. It is generally absent in waters that are acidic or in area that are disturbed with high siltation. The crab reproduces throughout the year with a peak in the wettest months. Sexual ratio is about 1:1, with egg-carrying females rarely seen due to their cryptic behaviour. The crab currently survives in limited numbers in small hill streams at Bukit Timah, Bukit Batok and Bukit Gombak.

Rapidly dwindling population – A cause for concern
Efforts to study the population of the Singapore Freshwater Crab have shown that out of the three known locations where the species was originally found, its population has declined sharply at one location, and remains extant (or still existing) in the other two locations.

So what has caused the decline of the Singapore Freshwater Crab? Unfortunately, this is a question that even local scientists have not been able to answer adequately. One possibility is that rapid urbanisation and industrialisation in Singapore in the later part of the last century has resulted in the rarity of freshwater streams, and acidification of the streams most probably caused by acid rain, thus making conditions undesirable for the species to live and propagate.

Conservation Efforts
There is a much cause for concern and a need for concerted efforts to protect the Singapore Freshwater Crab and its natural habitat. To augment current efforts to study and conserve the crab, the National Parks Board (NParks), in collaboration with the National University of Singapore (NUS), has embarked on a two-year project, which aims to conduct a rapid assessment of the crab population, study the current conditions of its existing habitat and look into possible remedial actions to ensure that the crab can continue to thrive in its natural environment.

The Singapore Freshwater Crab is an icon for nature conservation and serves as a reminder for us to protect the biodiversity in urbanised Singapore, for it is part of our unique identity and heritage.

A view of the crab from above.