The Things We Bee-lieve: Bees In Singapore’s Parks 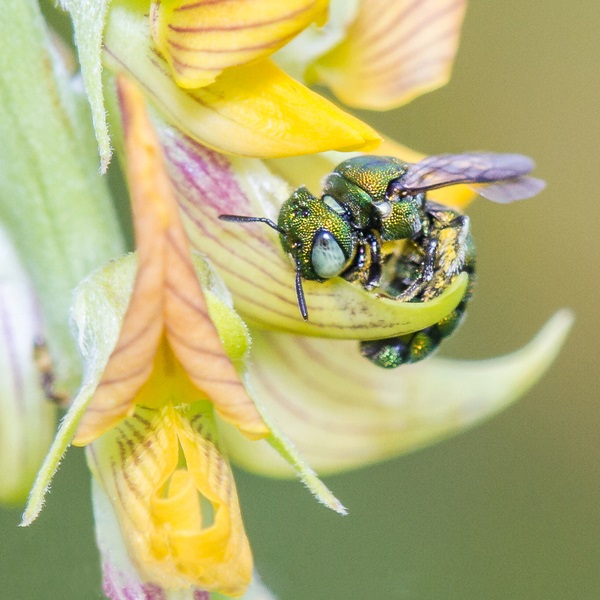 The metallic Dwarf Carpenter Bee (Ceratina smaragdula) is one of a number of iridescent bees that can be found in Singapore’s parks.

Prior to 2012, like many people, I had several misconceptions about bees. That year, I conducted a study of local flower-visiting insects in Singapore’s parks. I was particularly interested in bees, as little was known about these insects.

A Dwarf Carpenter Bee (Ceratina perforatrix) visiting a gourd flower in HortPark. This bee was once thought to be restricted to primary forests in Southeast Asia, but is now recorded in parks and gardens in Singapore

One prevalent belief is that all bees are honeybees, when honeybees are in fact just one of many kinds of bees in the world. Much to my surprise, the vast majority of bee species are actually quite unlike honeybees – they neither make honey nor do they form large colonies as honeybees do! These other bees, however, are no less important than honeybees to our natural ecosystems. 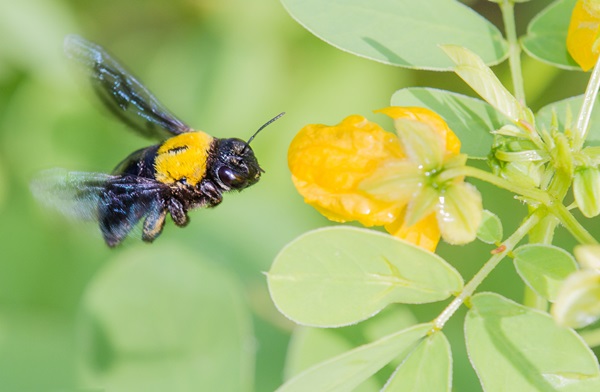 Another misunderstanding comes about because picture books often give the impression that all bees are striped yellow and black. In reality, bees, much like birds and butterflies, can be found in an array of vibrant colours. Some bees even sport iridescent metallic sheens! Bee sizes vary widely too, from tiny reed bees that could fit on your pinky nail, to giant carpenter bees bigger than your thumb.

Bees are peaceful; many would rather flee than sting even if their homes were disturbed. Only honeybees defend their nests aggressively in large swarms and can be considered dangerous to people. One must therefore be careful around honeybee nests. All kinds of bees can be safely observed even in close proximity when they are visiting flowers, as they would be preoccupied in gathering pollen and nectar for their young.

The Stingless Bee (genus Trigona) lives in large colonies, often building its nest in old trees. Thus, it is generally found only in gardens located near forests. It is relatively harmless as it is unable to sting people.

The varied lives of bees
What I found very fascinating about bees was their range of lifestyles. 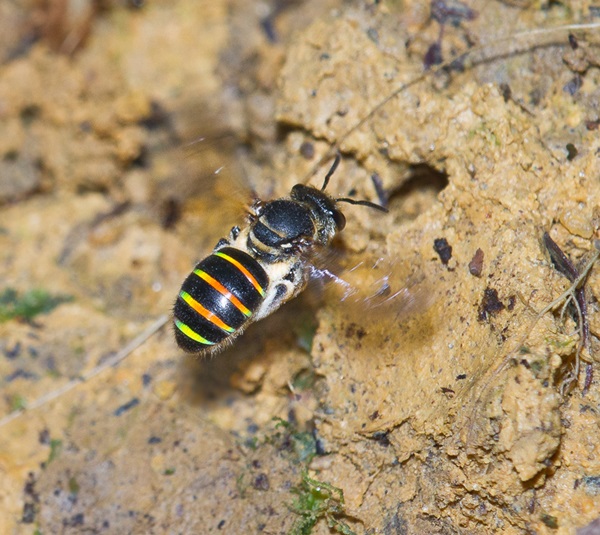 The Pearly-banded Bee (Nomia strigata) builds its nests in the soil. This colourful species is especially common in secondary forests, such as those in Macritchie Reservoir Nature Park.

In addition to honeybees, our tropical island is also home to several species of ‘carpenters’, bees that carve nests in wood; ‘leafcutters’, bees that cut and gather leaves to build their nests; and ‘diggers’, which excavate nests in the ground. Perhaps the most intriguing of them are the ‘cuckoos’, bees that lay their eggs in the nests of other bees instead of building their own! The young ‘cuckoos’ feed on pollen provided by their host parents, thus relieving the adult ‘cuckoo’ bees of the responsibility of collecting pollen for their young. The neon-blue Cloak-and-Dagger Bee (Thyreus sp.) is an example of a cuckoo; it lays its eggs in the nests of other bee species. This beautiful bee can be frequently observed in the Singapore Botanic Gardens. 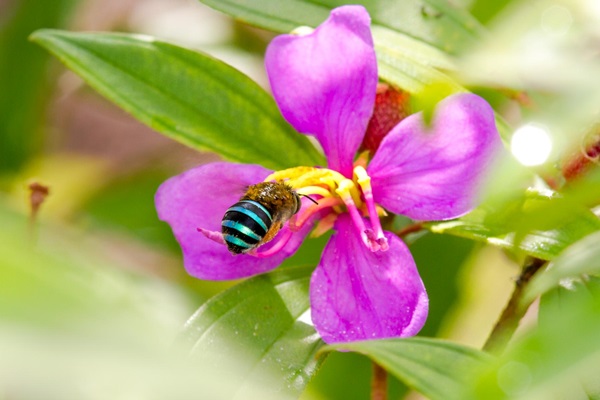 The Blue-Banded Digger Bee (Amegilla sp.) is a fast-flying solitary bee that is commonly seen in Singapore’s gardens. It builds nests in the soil, and is known to be the hosts of the Cloak-and-Dagger Bee (Thyreus sp.) featured above.

Globally, bees are highly beneficial as they pollinate food crops. In Singapore, native bees are potentially crucial for the health of local forests, as many flowering plants depend on bees for pollination. It is therefore important to conserve the diversity of these beautiful natives. 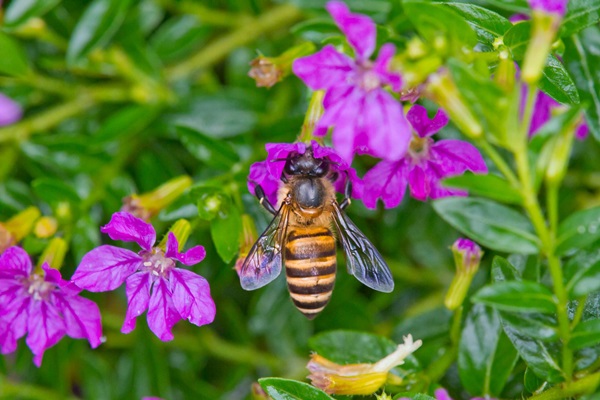 The Oriental Honeybee (Apis cerana) is one of three honeybees (genus Apis) native to Singapore, and the most frequently encountered bee in our parks and gardens.

So the next time you stop to smell the roses, do look out for these garden bee-uties!

Photos and text by Zestin Soh and Robin Ngiam

Author’s Note
Zestin Soh is an NParks scholar currently in his 2nd year of undergraduate studies reading Ecology and Environmental Biology at the Imperial College London. He was an intern with NParks under the mentorship of Robin Ngiam when he participated in the survey on flower-visiting insects. Zestin has set up a personal blog featuring general information and photographs of the bees of Singapore.

Surveying bees in Singapore
The seven-month study conducted in 2012 by National Biodiversity Centre revealed a surprisingly rich bee diversity in Singapore: 50 species from four families were recorded from seven parks. The Oriental Honeybee (Apis cerana), which was observed visiting at least 29 different flowering plants, was the most abundant species. The solitary Pearly-banded Bee (Nomia strigata) and Reed Bee (Braunsapis species) were also common in many parks.

Moreover, this study found at least six bees of the family Megachilidae that were likely to be first records for Singapore. One other notable finding in our urban gardens was the Dwarf Carpenter Bee (Ceratina perforatrix), as this bee was previously thought to be restricted only to primary forests! The presence of this bee and other rare species in semi-urban areas may highlight the role that parks serve in local bee conservation. You can read the paper that resulted from the project. It includes a list of bees and their associated flowering plants. We believe this list is a useful reference to park managers and horticulturists keen on bee conservation.

I love those blue bees their gorgeous