Welcoming Turtles on Our Shore

This past August, marine wildlife enthusiasts were in for a real surprise – Hawksbill Turtle hatchlings and an egg-laying mother turtle were sighted in East Coast Park, much to everyone’s wonder and delight!

NParks staff from the National Biodiversity Centre, which manages the conservation of terrestrial and marine flora and fauna in Singapore, responded to this occurrence. They helped to guide the hatchlings to shore and to relocate the turtle eggs to a more suitable location to ensure a higher chance of survival.

Curious about the incident, some members of the public expressed concern over how these turtles are protected in Singapore. We catch up with NParks Senior Manager Collin Tong who explained how he and his team, comprising Managers Ng Juat Ying and Koh Kwan Siong, adopted the best practices from one of the most established turtle hatcheries in the world, and how these lessons will help to shape future dedicated efforts towards protecting turtles.

Singapore is home to the Green Turtle (Chelonia mydas) and the Hawksbill Turtle (Eretmochelys Imbricata), which both continually return to our sandy shores to lay their eggs, despite our high rate of urbanisation and busy waters. 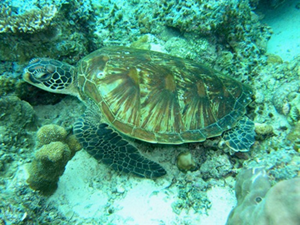 However, the turtles face many threats. Collin explained, “Turtles eggs may be predated upon by monitor lizards or affected by high tide, which can drown the porous eggs. Plant roots may also break through the egg shells, killing them by sucking up their nutrients and moisture.”

And even if the eggs do survive their approximately 60-days incubation period, challenges remain. For instance, hatchlings are attracted to light sources, and may crawl inland instead of heading out to sea. Collin recollected that he had seen hatchlings crawling onto foot paths and cycling tracks, eventually congregating below the brightest lamppost.

Hawksbill Turtle hatchlings at East Coast Park were guided to sea with the use of lights.

To learn how to better protect these turtles, Collin and his team attended a hatchery training programme at the Mon Repos Turtle Centre in Queensland, Australia, in February 2017. This well-established institute supports the largest concentration of nesting marine turtles on the eastern Australian mainland and has a hatchling success rate of around 70 to 80%, almost double that of other hatcheries in the region.

Shedding ‘light’ on the issue

The NParks team gained invaluable hands-on experience in turtle management from experts and experienced volunteers. For example, the team learnt about the light regime when handling turtles. Collin explained that while lights can be used more liberally with hatchlings, and are used to guide them from the shore to the sea, with nesting turtles, lights can only be shone from the rear when they are in the midst of laying their eggs.

“Lights should be avoided when the mother turtles approach shore and return to sea,” he added. “This is because when returning to the sea, they need to see the horizon, more specifically the dark patch separating sea from sky, to find their bearings.” The NParks conservation team documenting the egg-laying process was mindful not to shine their lights in front of the turtle.

Finding the Best Spots for Nests

Nest relocation also poses an issue. When turtle nests are laid in unsuitable locations too close to the seafront or in areas with high human traffic, they need to be quickly relocated, preferably within the first two hours of the eggs being laid.

This is because while eggs can adapt to the initial shock of dropping 40 to 60 cm into the nest, after two hours, the embryos will start developing and will stick to the inner side of the egg. Movement may then tear the tissue from the egg shell, killing the developing turtle in the process, Collin explained.

The eggs were carefully relocated to a quieter spot.

These and other lessons will be adapted and incorporated as key practices in Singapore’s first sea turtle hatchery located at the southern lagoon on Small Sister’s Island. Due for completion in 2018, the facility will provide a dedicated in situ facility to receive, nurture and hatch rescued turtle eggs assessed to be at risk from other coastal areas in Singapore, in an effort to increase their survivability. It will be constructed with a $500,000 donation from HSBC.

“We hope that we can establish ourselves with the hatchery and rehabilitate our coastal areas well so that turtles will choose to come back to Singapore, year after year, to lay their eggs here,” Collin said.

“We want to continue what we’re doing now and do this consistently for the next 10 to 20 years. The goal is to be successful in outreach, education and conservation, and hopefully we can see our hatching success rate as high as that of Mon Repos and elsewhere.”

If you spot a nesting turtle, please speak softly, keep your distance and refrain from using lights and flash photography to avoid scaring it. Also, contact the NParks helpline at 1800 471 7300 to report your sighting.

For more information on what to do when encountering these beautiful animals, visit https://nparks.gov.sg/gardens-parks-and-nature/dos-and-donts/animal-advisories/hawksbill-turtles.