You may be surprised by the sudden sprouting of mushrooms, sometimes literally overnight, after heavy rains.

Mushrooms may be more familiar to us as food, but they are actually the fruiting bodies of fungi that appear above the ground when the conditions are just right for a specific purpose – to disperse their spores. Once this reproductive task is done, some species may rot away within days.

Fungi are often mistaken for plants but they are actually in a kingdom of their own and are more similar to animals. They do not make their own food. Instead, the main bodies of fungi exist (largely out of sight) as colonies of hyphae, which are long, thread-like branches, feeding on food such as dead plants or other decomposing matter. Some fungal colonies can be thousands of years old and cover hundreds of hectares. Without fungi, organic material cannot be broken down and we would be left with dead materials from eons ago.

Below are five groups of mushrooms that look like they come straight out of a fairy tale. The Phallus spp. is a beautiful family of mushrooms that “wears” a veil or a skirt and is sometimes seen along the edges of forests or gardens. The fruiting body has a veil which may be white, yellow, orange, pink or red. Spores are found on the cap, which exudes a smelly, sticky and sweet liquid that attracts flies and other insects. By feeding on the liquid, these insects unwittingly help to spread the spores elsewhere. Not all stinkhorns come with a veil or a skirt however. The dog stinkhorn (Mutinius spp.) for instance, has a bright red cap but no veil or skirt. This odd-looking family of fungi (Nidulariaceae spp.) has fruiting bodies which appear in clusters on the surface of soil or wood chips. Each fruiting body forms a cup-shaped nest, which contains spore-filled eggs. When raindrops strike the nest, the eggs (called ’periodoles’) are flung into the air, where they land on branches and leaves, and the spores eventually get dispersed.

The fruiting body of the common puffball (Calvatia spp.) is often large and round, enclosing millions of spores within. When hit by a falling branch or trodden upon by an animal, the outer covering of the fruiting body breaks open and expels the spores into the air, like a puff of smoke, hence its common name. Other puffball species have fruiting bodies that come with a thin outer covering that enables spores to be “puffed” out just by their bodies being struck by raindrops or a gust of wind. 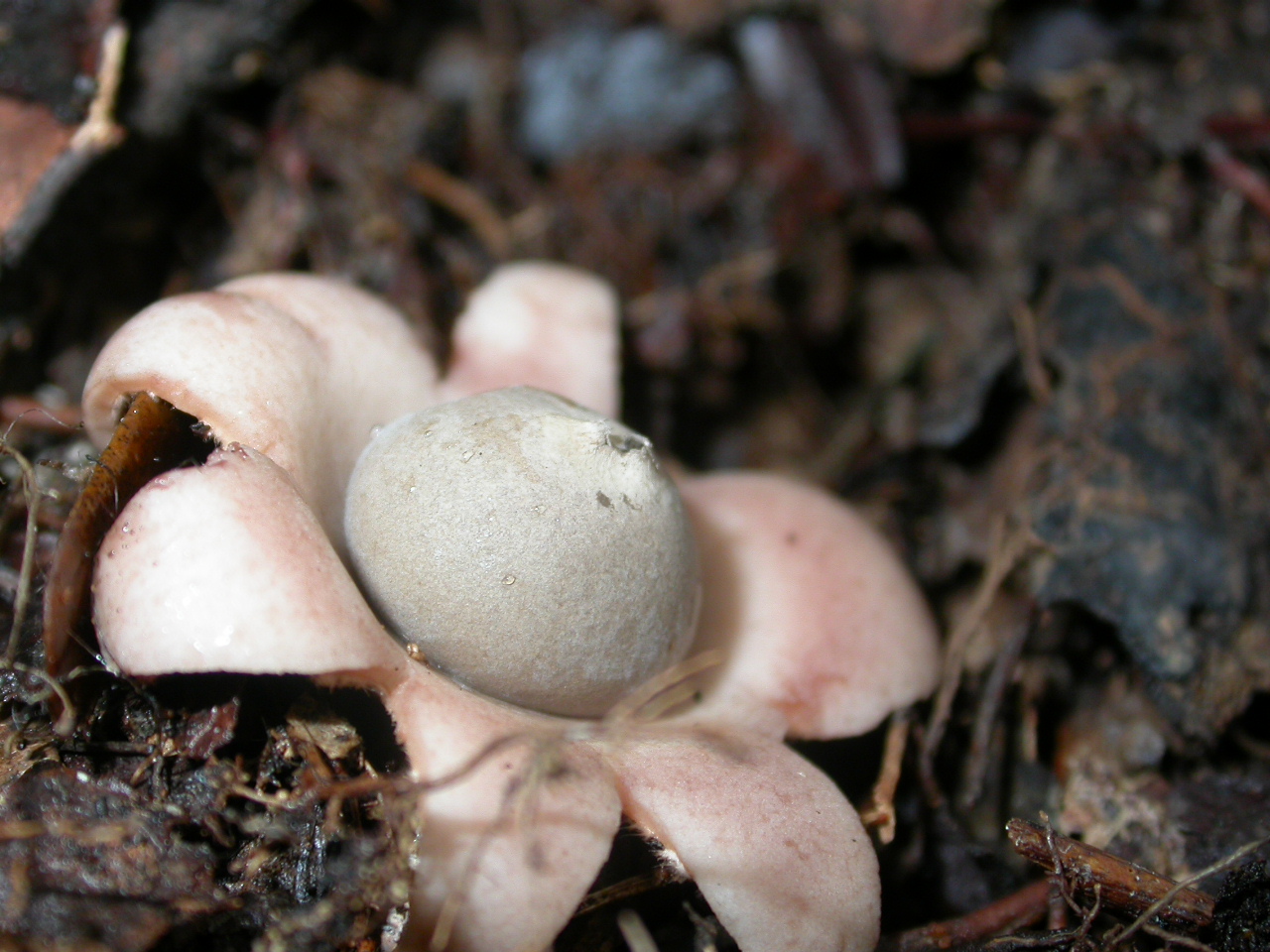 These flower-like mushrooms (Geastrales spp.) can be found on the forest floor and along footpaths. The outer layers of their fruiting bodies fold back into six to eight arms, like a star. At the centre sits a spore-filled ball-like structure. When raindrops hit or animals brush past, the spores within this ball are forced out through a hole at the top. Why do fungi make light? Aristotle asked this question more than 2,000 years ago, but it is only in recent years that scientists are beginning to have an idea. It seems that some mushrooms have evolved to glow in the dark to attract insects to spread their spores. Of the 100,000 known fungus species, more than 70 are bioluminescent, including some that can be found in Singapore, such as the Favolaschia manipularis, Oudemansiella spp. and Mycena spp.

Interested to learn more about our fascinating biodiversity? Check out our Biodiversity page here!