Out of Sight, Not Out of Mind

While much of Singapore sleeps at night, and stays at home during this period, our nature reserves are abuzz with activity from a surprising abundance of biodiversity.

Animals such as the Common Palm Civet, Leopard Cat and Lesser Mousedeer move about under the cover of darkness. Many have highly sensitive eyes that enable them to adapt to low light conditions or even absolute darkness. But looking for them in the night can be a challenge.

To monitor population numbers and movement of the Wild Boar and Sambar Deer, NParks sets up camera traps in known hotspots every alternate year. This biennial operation triangulates the locations of our native species and allows for undetected monitoring of the animals.

Setting up camera traps in our nature reserves also allow NParks to photograph the animals without any disturbances. Here are four shy and elusive creatures rarely seen by the public but caught on our camera traps. The Leopard Cat (Prionailurus bengalensis) is a small wild cat that gets its name from its leopard-like coat. While it is mostly found foraging on the forest floor, it is also a capable tree-climber. Although it is only around the size of a domesticated cat, it is one of Singapore’s larger carnivores whose diet consists of frogs, lizards, birds and rats. 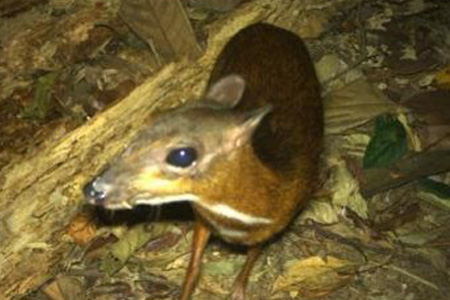 One of the world’s smallest known hoofed animals, the Lesser Mousedeer (Tragulus kanchil) weighs only 2 kg and stands at just about 45 cm tall at adulthood. This native species is not biologically related to deer despite its name. The Lesser Mousedeer lacks antlers and instead possesses elongated canine teeth that males often use in fights. 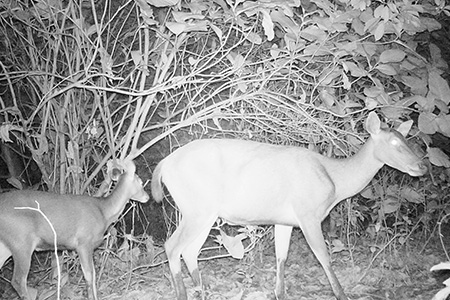 The Sambar Deer (Rusa unicolor) is one of the largest deer species in the world, after the Moose and the Elk. It inhabits wooded habitats from dense rainforests to open deciduous forests and secondary forests. It is most active at dusk and at night, resting in the day among thick vegetation. Its diet consists of a wide variety of vegetation including grasses, leafy foliage, fruit, water plants, shrubs and trees. 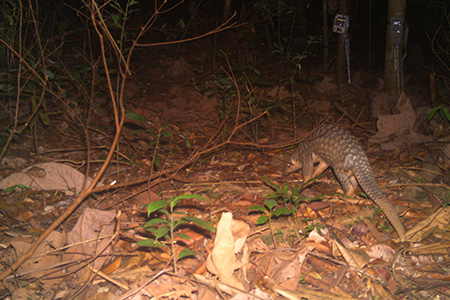 Also known as the scaly anteater, the Sunda Pangolin (Manis javanica) is the only extant mammal fully covered by keratin scales. It feeds mainly on ants and termites, which it locates with its strong sense of smell. It possesses thick powerful claws that can dig into the soil in search of ant nests or tear apart termite mounds. It plays an important ecological role in controlling ants and termite populations in our forests. Due to habitat loss and poaching, it is critically endangered in Singapore and the rest of the world.

Each camera trap is attached to a tree in our forests and at pre-determined locations according to the objective of the study. The camera traps have a built-in infrared sensor which can detect movement from heat-emitting animals. When an animal moves past the sensor, the camera trap is triggered to take either a picture or video which can later be post-processed.

This method causes minimal anthropogenic, or human-made, disturbance to the animals, and allows researchers to keep sighting records of the animals without altering their natural behaviour.

Each time an animal is recorded, officers get a better understanding of the ecology of our forests, and the behaviour of the wildlife within it. This data can be used to formulate conservation efforts, and to manage animal movement in target areas.

Can’t get enough of our wildlife caught unaware? Check out what our Animal Cams set up in Sungei Buloh Wetland Reserve have recorded! Catch a glimpse of otters frolicking in a pond, or migratory birds feeding. Check out these videos here.


Text by Bryan Wu
About the writer

Bryan Wu is a third year journalism student from Nanyang Technological University’s Wee Kim Wee School of Communications and Information. As part of his school’s professional internship programme he chose to intern at NParks’ Communications and Community Engagement department. In this time, he has created posts for NParks' social media platforms, written articles for My Green Space and worked on producing videos to inform the community on the work NParks does.