Nature is not only all that is visible to the eye, it also includes the inner pictures of the soul. - Edvard Munch

Nature is always underlooked as we pursue our busy life. When we rush around, we never know how our interpretation of nature will change if we pause to see and feel it. "Before the field trip, I always thought that nature was all about 'Oh look at that tall tree' or 'Yuck! Look at all that mud', that kind of idea," said Bryan Wijaya, a volunteer for the Comprehensive Marine Biodiversity Survey (CMBS) of Singapore.

Bryan, who will be 15 this year, started volunteering in November last year. He has participated in one field survey and two lab studies so far. "Now I think 'inside that mud, there are many living things!' and 'Wow! Imagine what animals live on the tree!' Now after witnessing the tiny organisms living in those beautiful or disgusting places, I feel more knowledgeable about nature," he adds.

Getting muddy is part of the job

The field trip to Pulau Semakau in November last year was Bryan's first experience volunteering for a nature group, as well as his favorite activity of the marine survey. His previous volunteering stints were as part of his school activities.

At Pulau Semakau, together with a small team of volunteers, Bryan sampled a patch of mudflats between the mangrove trees that had been planted on the island. It was not easy to get to the location. Where the mud was very soft, the volunteers needed to walk on their knees to help spread out their weight so that they wouldn't sink so much. If they got really stuck, they had to crawl out. "Sometimes the mud gets really deep and people get stuck, it's really funny just watching how hopeless they are when they attempt to get free," said Bryan.

But Bryan quickly learnt it is never good to laugh too early at others - he stepped straight into the thickest spot of mud and coated himself with sludge. Soon, Bryan found himself stuck in the mud a second time when he tried to help a teammate trapped in the mud.

When he wasn't mired in mud, Bryan trawled the mudflats for samples to take back to the lab - he was very excited when he pulled out a Horseshoe Crab using a fishing net, as well as separate worms in a container by their body shape and size. After the field survey, Bryan also helped out at the laboratory. While he found laboratory work quite interesting, he very much prefers being out in the field.

Turning into a convert

While Bryan now says that his favourite part of volunteering is "just the joy of being with nature", he admits he is not a self-motivated volunteer. His parents felt he was wasting his time just sleeping or playing the occasional online game, so they searched the Internet and found him a volunteer position with CMBS. But after his experience at Semakau, he has now turned into a nature volunteer enthusiast.

When his mother came to pick him up from the ferry terminal, he said he rambled on non-stop about how great volunteering was and how much he wanted to do more of it. If his friends are willing to get down and dirty, Bryan would definitely ask them to give it a shot. So far, while he has spoken to some of them, their responses had been "yuck!", but a few did think the work was cool. He hasn't converted any of them yet to join him on future CMBS field trips, but he's not going to give up. 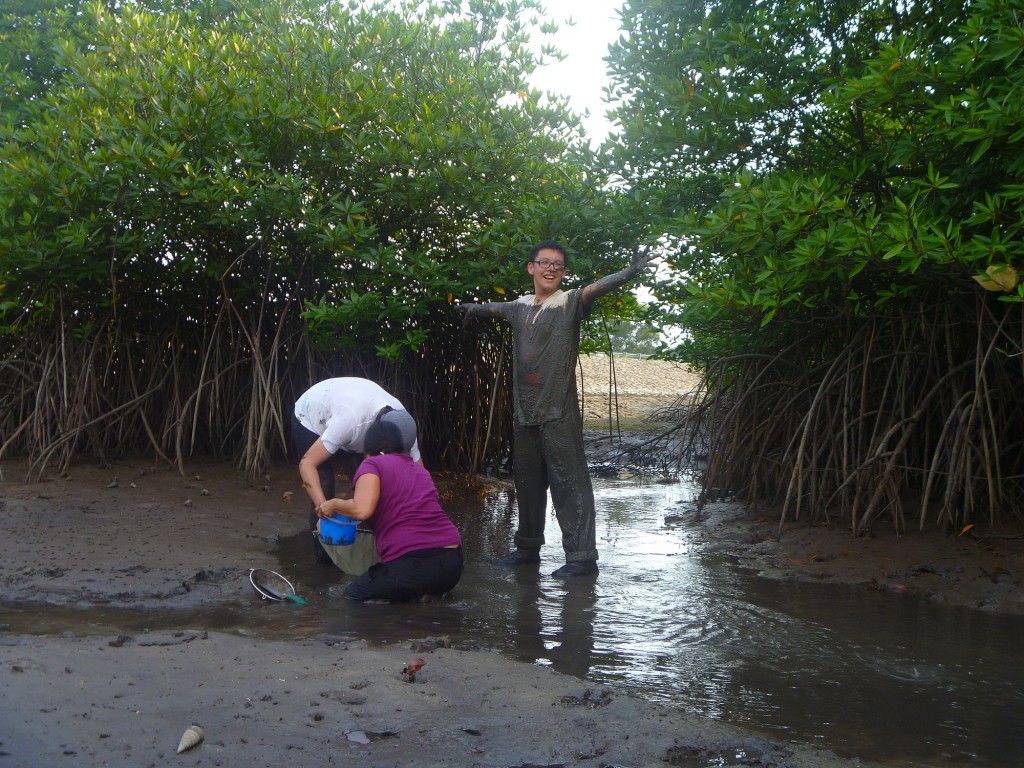 At the mudflats, Bryan slipped on the mud twice, but took it all in his stride. 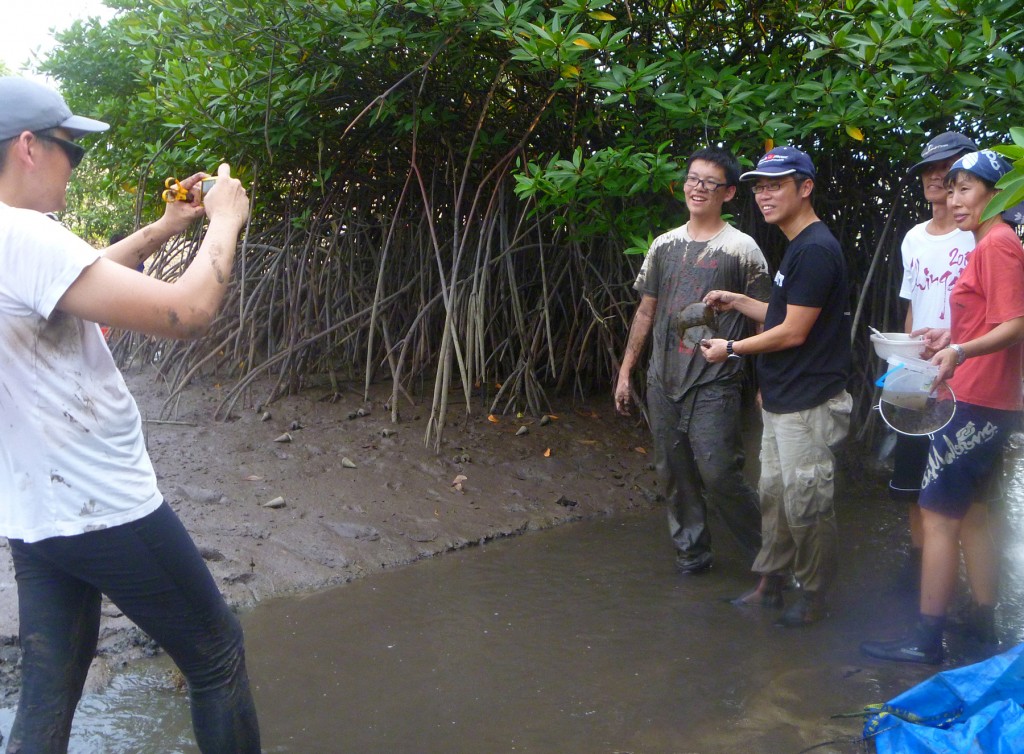 Bryan gamely poses for a picture after falling into the mud. The other volunteers are holding the equipment they used for trawling for specimens in the mudflats. 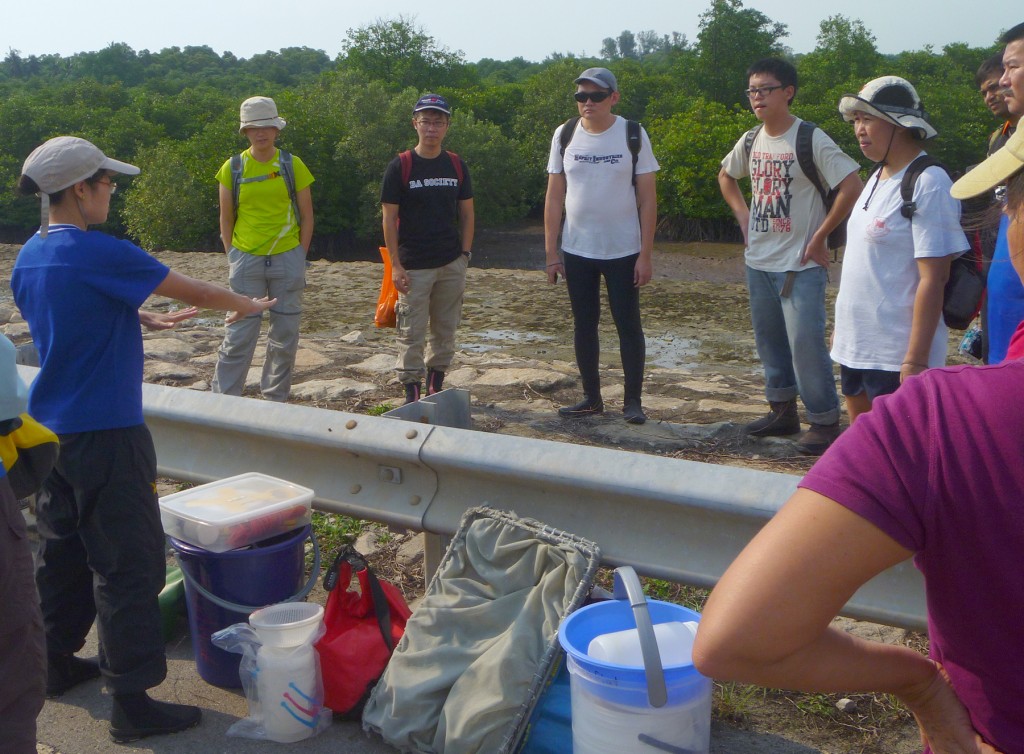 Bryan (fifth from left) at the briefing that took place at the start of the survey.

Can children from 9 to 12 join as volunteers for CMBS

Thanks for the opportunity to be in this newsletter Erin!!!

Hi Rebecca, We prefer our volunteers to be above 12 years of age as some of the work may be risky and difficult for younger children to handle. However, if the children are very keen, their parents should contact Jonathan Ngiam directly so that he can briefed the parents in detail on the tasks involved. This will help parents make an informed decision on their children's ability to handle the tasks. Should the parents give the go ahead, they will need to sign an indemnity form on their children's behalf. For more information on being a CMBS volunteer, do contact Jonathan at jonathan_ngiam@nparks.gov.sg.