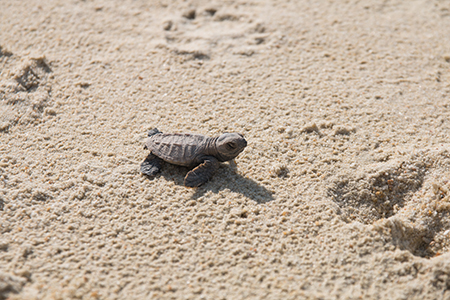 A turtle hatchling making its way from the turtle hatchery at Sisters’ Islands Marine
Park, out to open sea.
Photo credit: Max Khoo

Singapore’s first turtle hatchery was opened at the Sisters’ Islands Marine Park in late September 2018. The hatchery is strategically located on Small Sister’s Island, a protected area zoned for conservation and research.

Supported by HSBC’s 150th anniversary Community Fund through the Garden City Fund, the hatchery will provide research opportunities for scientists to study local sea turtle populations. Outreach and education programmes will also be organised at the hatchery.

On the morning of the hatchery’s opening, about 20 turtle hatchlings pushed their way through the sand and emerged at the surface. They subsequently made their way out to sea, ready to take on the big world out there. See these hatchling here: https://www.facebook.com/nparksbuzz/videos/2163613280585248/

The turtle field station (left) is a hub for volunteer training as well as educational and research programmes. The field station (right) is situated right next to the incubation sand pit area which uses smart technology to support the operations of the hatchery.

The incubation sand pit area comprises three non-magnetic metal cages, where the turtle eggs are kept. The cages are partially buried in the sand and will protect the incubating eggs against predators such as monitor lizards. Smart technology, such as Bluetooth water level data loggers and temperature sensors, are used to support the operations of the hatchery, enabling remote monitoring of various environmental conditions. This can help increase hatching success.

Bluetooth sensors monitor water levels around the nests, ensuring that the incubating eggs will not be negatively impacted by saltwater intrusion. Nest temperature is also monitored remotely to ensure that the eggs, whose viability is temperature dependent, will develop and hatch successfully.

The Hawksbill Turtle (left) and Green Turtle (right) are the two species of turtles you can find in Singapore.
Photo credit: Max Khoo and Karenne Tun

There are two species of turtles that call Singapore home – the Hawksbill Turtle (Eretmochelys imbricata) and Green Turtle (Chelonia mydas). With only a handful of turtles from each clutch of between 100 and 150 eggs surviving till adulthood, locating the hatchery along the shores of the protected Sisters’ Islands Marine Park plays a crucial part in increasing their chances of survival.

Small Sister’s Island is an ideal location because it is centrally sited between East Coast Park and the rest of the Southern Islands, where the majority of turtle nesting activities have been recorded since 2005.

Most of the nests that are transferred to the hatchery are at risk from human disturbance or predators like monitor lizards. They are relocated to the island, where they can be incubated naturally and without disturbance.

Other threats to turtles include:
Marine trash and plastics – Over 1,000 turtles die annually as a result of either entanglement or ingestion of marine debris and plastics. Turtles often mistake balloons and plastic bags for jellyfish and consume them.

Fishing equipment – Turtles can drown when they are unable to surface to breathe after being trapped by fish nets abandoned in the waters. They are also victims of by-catch of fishing trawlers, where they are accidentally caught in the net when fish are being harvested.

Boat strikes – Turtles are vulnerable to boat strikes when surfacing to breathe at places with high boat traffic, such as popular dive destinations.

Light pollution – Turtle hatchlings naturally head towards the sea, guided by the light from the horizon. Light pollution from street lights may disorient them, causing them to head in the wrong direction. Green Turtle
> Round and unhooked beak
> A pair of prefrontal scales

How You Can Help

The community can play their part in marine turtle conservation. The hatchery provides a platform to train volunteers on how to locate and identity turtle nests, safely transfer the eggs and relocate them to the hatchery. After advanced training, regular volunteers will be able to count the number of hatchlings, take the necessary measurements and help release the hatchlings out to sea.

You can contribute to turtle conservation by calling the NParks helpline at 1800-4710-4300 to report sightings of turtles on Singapore’s shores.

Join the Biodiversity Beach Patrol where volunteers help to patrol beaches at night to identify signs of turtle nesting and other marine biodiversity. Volunteers will be required to attend training on 12 May 2019 or in July 2019 (date to be confirmed) and attend at least one patrol session from June to September 2019. Find out more at www.nparks.gov.sg/gardens-parks-and-nature/parks-and-nature-reserves/sisters-islands-marine-park/iyor/biodiversity-beach-patrol.

Divers can upload photos of turtles’ side profiles to the SGBioAtlas mobile application to help us monitor them. Facial scale patterns in turtles are akin to fingerprints in humans, and do not change much over time. Contributed photos will enable better tracking of the turtles’ movements and populations.

Here is what you can do if you ever spot a turtle along our shores:

Check out this other batch of the precious little hatchlings making their way out to sea: https://www.facebook.com/nparksbuzz/videos/280478922587730/